A very specific audience of video editors, 3D designers, and other creative professionals were waiting for a new post-Intel Mac with good graphics power. Apple’s two new MacBook Pro laptops are clearly aimed at this audience, with an emphasis on graphics processing and connectivity. Now these smart users must decide if these new versions are professional enough for their needs. Our first practical experience indicates that it is.

The 14-inch and 16-inch MacBook Pros are similar in design and component options. They both add the same resurrected ports, a new Mini-LED display, and an improved webcam. Both are available with either the M1 Pro or M1 Max chip, with some slight variations in the CPU specs. Both also abandon the idea of ​​an increasingly slimmer design, with a massive, almost retro look.

The first thing you notice about the new 16-inch MacBook Pro is that its build is slightly thicker and heavier than its predecessor. And unlike some older MacBooks, this version doesn’t try to hide its curvy, narrow size. It’s proudly angular, with thicker sides for more ports and rubber feet. It is also heavier, 1.6 kg, which is no small thing. It adopts an almost retro style on the outside, while offering something new on the inside.

With so many changes, it’s hard to say which one is more important. It is true that the new M1 Pro and M1 Max chips are precisely what a part of the creative professional market was waiting for. These new chips replace the need for an Intel processor and an AMD graphics card, a combination previously only found in a few high-end Macs.

And with prices starting at $ 2,749 for the 16-inch model and $ 2,249 for the 14-inch model, it’s probably a good idea to have a justification for such a purchase, even if someone else (like your employer) pays for it. 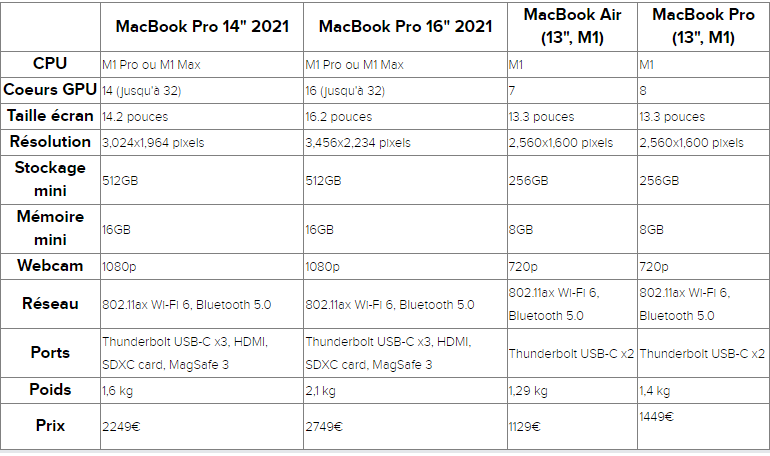 If everything finally caught on again, it was time for HDMI ports and SD card slots to make a comeback. Apple has surprised everyone with the return of not only these classic and useful ports, but also the missing MagSafe power connector. If you’ve followed the evolution of Apple, you know that nothing is permanent when it comes to ports. It’s as if Apple’s designers have decided to go through all the feedback they’ve received over the years and pick the few most important wishes of all.

We remember everything first MacBook Pro 2006. The original Pro included three USB 2.0 ports, FireWire 400 and FireWire 800 ports, an ExpressCard slot, and a DVI port. It was only with the first MacBook Pro with Retina display in 2012 that HDMI made its debut on a MacBook. But it disappeared a few years later, when Apple adopted USB-C from the 12-inch MacBook. Also, the SD card slot has come and gone on versions.

HDMI is something that users have asked to bring back. It is still extremely useful, although it is in the process of becoming an old port. This is also why we kept laptops with VGA ports for so many years when they should be gone. People have old or legacy devices, like printers, projectors, and displays, and they want to be able to connect to them right away, with a cable long enough to be lucky enough to find one buried in the ground. drawer. If the need arises, you can probably find an HDMI cable somewhere or steal one from a game console. You are less likely to stumble upon a USB-C to HDMI dongle by chance.

The MagSafe connection, a clever power plug design that stayed in place but disconnected harmlessly if tripped over, was also phased out several years ago in favor of USB-C. The plug was popular, but there was also a huge social benefit to everyone using the same type of USB-C plug. So it made sense to be skeptical about his return. 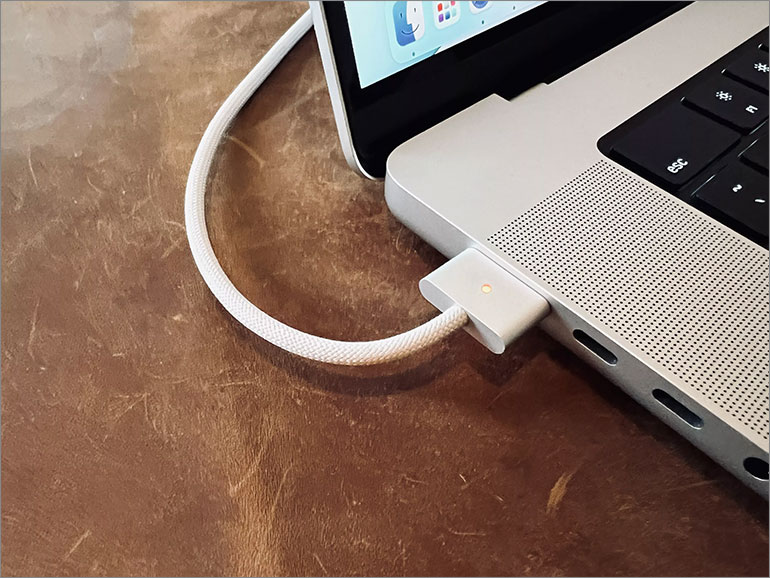 You can still charge this new MacBook with almost any USB-C charger, using any of the three USB-C ports. We tested it with a 65-watt Lenovo charger, a 39-watt Switch charger, and an older 61-watt MacBook charger. They all worked, some much faster than others. The 16-inch Pro comes with a new 140-watt MagSafe 3 charger, while the 14-inch Pro has a 96-watt MagSafe 3 charger.

The MagSafe cable that runs from USB-C on one end and ends with the MagSafe plug on the other end, is covered in a woven cover, much like the cables on the 24-inch iMac M1. It’s a much nicer feel than the regular rubber cables found in last year’s MacBook M1s.

In practice, MagSafe is only as good as we remember it. The end of the magnetic plug, which looks a lot like older models, snaps in easily and stays in place unless you pull it firmly. Microsoft also offers a version of this device, with a small magnetic fin that slides into a power port on Surface Pro tablets. But in this case, the magnetic head never stays in place and always routes the cable to a place that it can be inconvenient so it’s nice that you can use normal USB-C for charging. 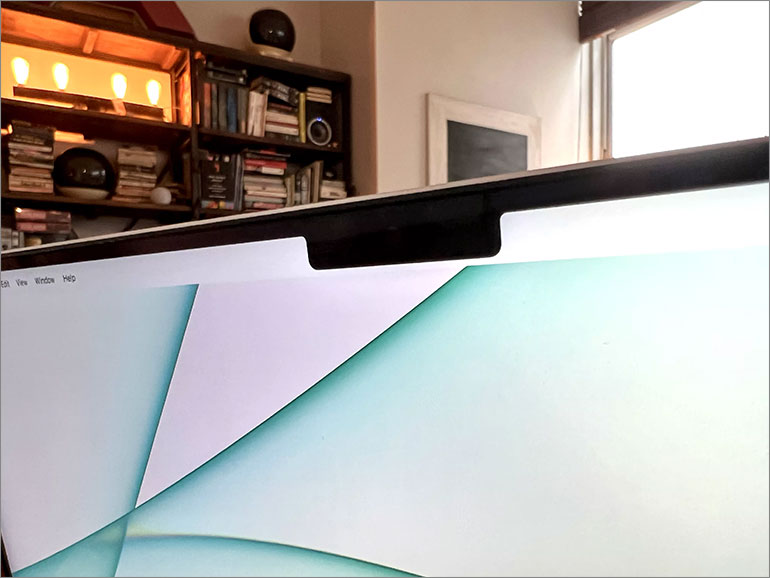 A larger than average laptop screen

In modern laptops, the screen bezel has become so thin that there isn’t even room for a webcam. We have seen this on other laptops where the camera is moved to an inconvenient location, or down to a small hole with poor image quality.

Here, the camera is inserted into an iPhone-like notch at the top of the screen. Yes, like on an iPhone. And just like on the iPhone, you can’t help but see it invading the surface of the screen at first. Then after a few hours or a few days, it mixes with the background and is forgotten.

Managing the notch in MacOS is particularly effective, as the menu bar of the open application moves to be located right next to the camera notch. It’s so much better than having dead space in there and it frees up the rest of the screen. It is a good compromise. 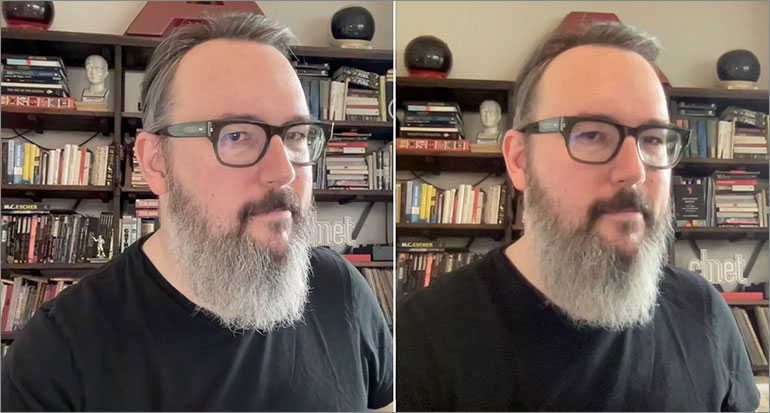 The camera will also satisfy you if you are used to lower resolution 720p cameras on other Macs (and most Windows laptops too). In the age of online meetings and remote conferencing, a webcam is an important part. These new MacBok Pros join the 27-inch iMac (Intel) and the 24-inch iMac M1, as well as some other equipment such as the Surface Pro 8, by adding a full-HD camera, with 1080 horizontal lines of resolution. Once you start using a better camera for online meetings, it’s hard to go back.

The mini LED display (which Apple calls the Liquid Retina XDR display) is similar to the display on the larger model iPad Pro, and it can also achieve a 120Hz refresh rate. As with the iPad Pro and other minis. LED, the actual update The rate is variable, which can save battery. It’s brighter too, reaching a sustained brightness of 1,000 nits, compared to 500 nits on previous models. 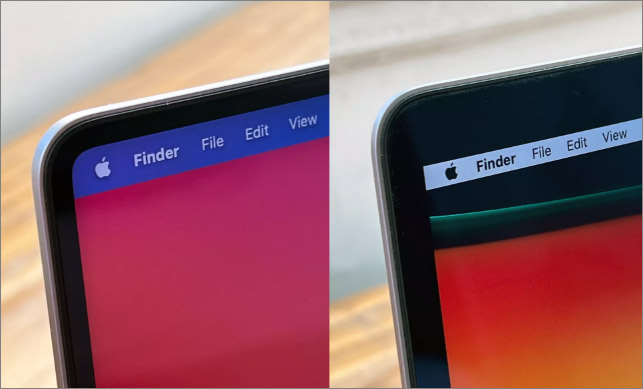 In practice, it is similar to OLED, that is, it combines near-full blacks with extreme brightness, which is perfect for high dynamic range content. We took Apple’s suggestion and opened a 4K episode of Foundation on Apple TV Plus, and it was excellent. Almost more importantly, the sound was excellent, with excellent and wide spatial separation from the six-speaker system.

It’s quite surprising that the Touch Bar stayed in place for so long. The idea of ​​a second screen, especially a touch screen, is a good idea on paper. Some phones and laptops are also adding secondary displays today. But in this case, she was never really adopted. That’s why it disappeared and was replaced by good old function keys. 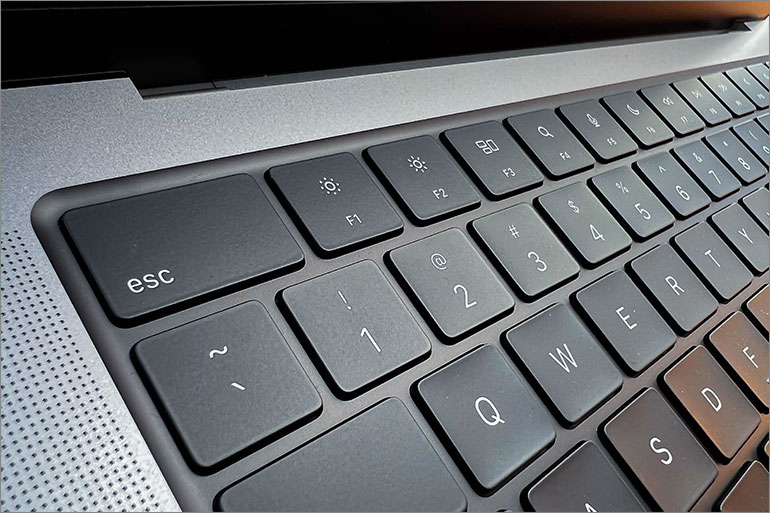 The Touch ID fingerprint reader has been separated and is now on the keyboard on the MacBook Air, Pro, and 24-inch iMac.

Without going so far as to defend the Touch Bar, however, it might fail to adjust brightness and volume quickly.

The big question is whether these new M1 Pro and M1 Max chips are powerful enough to make the MacBook Pro truly professional. These two chip options, both available in any screen size, have been explained in detail by several of our colleagues.

According to Lori Grunin, who specializes in this, “there are two versions of the M1 Pro, one with eight CPU cores and 14 GPU cores and the other with 10 CPU cores and 16 GPU cores.” The M1 Max also has 10 CPU cores, but you can choose between 24 or 32 GPU cores. Lori clarifies: “The M1 Max and M1 Pro clearly differ in terms of maximum performance, with the M1 Max doubling its theoretical performance in certain configurations, such as ProRes hardware accelerators, which is extremely important for mounting. . Professional video. “The new macOS Monterey would also add a high-power mode, like the high-performance mode of a Windows PC, for 16-inch systems equipped with the M1 Max chip.

In a first wave of testing, the M1 Pro (at 14 inches) and M1 Max (at 16 inches) performed better in tests than the first wave of comparable Intel-based Mac M1s or PCs.

Since video editing is an important part of the Mac ecosystem and a huge selling point for the M1 Pro and M1 Max, we ran some tests as well. In Adobe Premiere, we edited some short 8K video clips shot by one of our video producers. We then added a bunch of random stuff to the project: different color correction for each clip, transitions, digital effects, and floating titles. The resulting video was approximately 50 seconds long and was exported as an 8K H.264 file at a constant 50Mbps bit rate.

As the following table shows, the newer Macs accomplished this task more than twice as fast as a standard Mac with M1 or a 2019 MacBook Pro with an Intel Core i7 processor and card. AMD Radeon 5300M graphics. 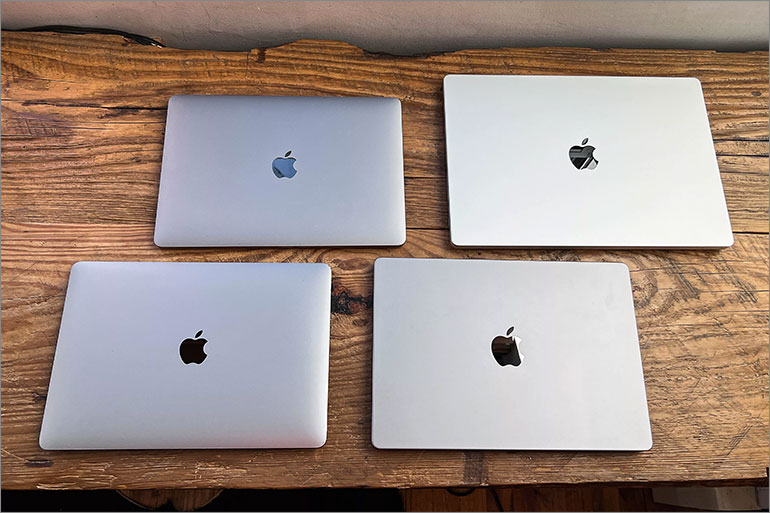 Is the MacBook Pro Right For You?

That’s the million dollar question, or at least the $ 2,749 and up question. All the video editors and creative professionals we spoke to are eager to get it or have already pre-ordered it. For this audience, the decision comes down more to the choice of screen size and a small, medium, or large number of GPU cores.

If you don’t plan on using those new hardware capabilities and just want the latest and greatest MacBook, choosing the new MacBookPro would essentially be a vanity purchase. The old MacBook Air for just over $ 1,000, with its own M1 chip, is still the most universally useful laptop. It misses out on the new 1080p webcam though, which is downright fantastic.