This is the weight of NFT sales worldwide in 2022, which is slightly up 0.4% year on year. While the progress is commendable, it has been slowed down by the setbacks that have accumulated in the crypto ecosystem over the course of the year. Thus, the first two quarters leading up to the cryptocurrency crash in June and the FTX crash in November concentrate 83% of the value generated. It is difficult to compare with the previous year in such an emerging market. The trend seen throughout 2021 has been a gradual buildup.

This is the volume of trade carried out worldwide in 2022. This means an increase of 11.4% in one year. It should be noted that, despite the invested amounts, the number of exchanges in the last quarter increased again. A trend that confirms that NFT traders remain active – due to broken prices in particular – in difficult conditions for the sector after the fall of FTX. Thus, DappRadar estimates in their report that in the second half, at the height of the crypto crisis, there were almost as many (5.2 million) of them as in the first half. 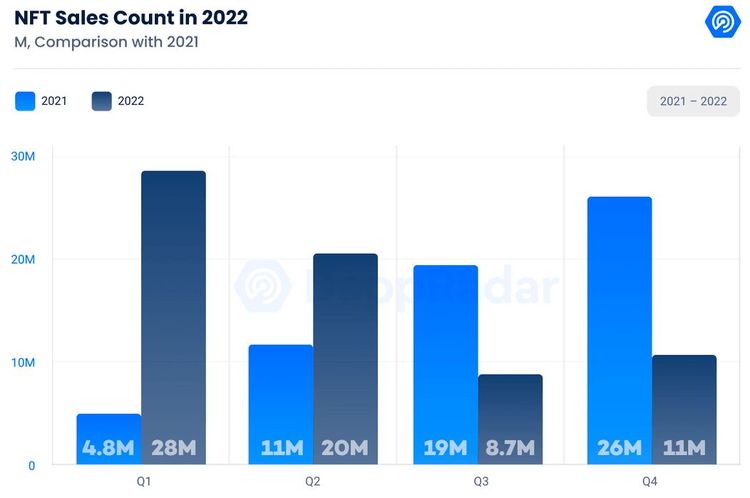 This is the market share of OpenSea. The token exchange platform appears to have cemented its global dominance as it weighed in at “only” 59% in 2021. At the same time, more solid competitors are gradually appearing – at the top of which are X2Y2 (6.1% market share) and Magic. Eden (5.9%). The two players claim to have recorded as much volume as OpenSea since the start of 2023, amounting to almost 400 million euros. In a new area, the rating can change quickly. 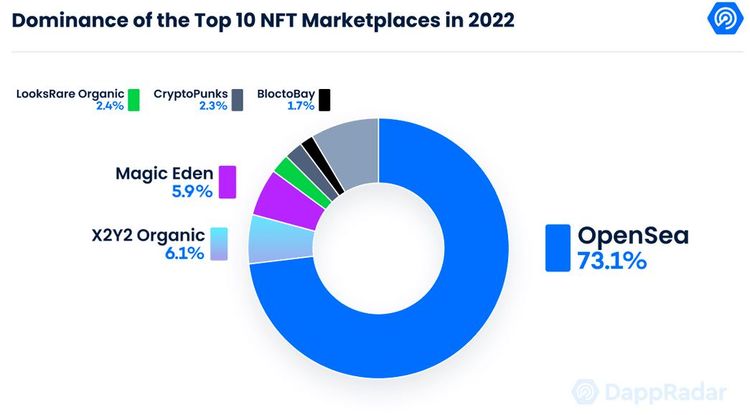 This is the value that the Top 100 Biggest NFT Collections lost during 2022. Although she weighed $15 billion a year ago and hit $19 billion in March, her valuation has melted like snow in the sun to hit $4.7 billion. euro at the end of December. A symptom of a crypto winter that hasn’t bypassed the most popular token collections like Bored Ape Yacht Club, Azuki or Meebits.