NFTs are invading Instagram – Mark Zuckerberg and his team have been eyeing the crypto ecosystem for several years now. After trying to create a currency for Facebook and his other apps, Zuckerberg is now taking on NFTs. Good news for Flow, which has just been integrated into Instagram.

Since 2018, Mark Zuckerberg, head of Facebook, Instagram and WhatsApp, has been keeping a close eye on the crypto ecosystem.

Thus, he first tried to join the ecosystem by starting to create money. Then the Libra stablecoin project was born. This stablecoin will become Diem before the project closes in early 2022.

Finally, the Meta will give way to the song NFT, whose enthusiasm has continued to grow throughout 2021.

Thus, in parallel with the announcement of the end of Diem, Meta gradually leaked information suggesting that NFTs would be integrated into Instagram.

Finally, on May 9, Meta launched a pilot program to allow a few selected Instagram users to test out NFTs.

Now Mark Zuckerberg wants to move forward by announcing the rollout of the feature in a hundred countries around the world. He also takes the opportunity to announce “new integrations with Coinbase and Dapper.”

>> Easier to handle than DeFi protocols? Sign up for PrimeXBT (commercial link). <

So, in addition to Ethereum or Solana NFTs, Flow NFTs will also be available on Instagram. The integration, which was already announced during a pilot launch in May, will now be available to network users in 100 countries.

Indeed, Dapper Labs is the company behind one of the first NFT phenomena to be talked about in Ethereum: Cryptokitties. As a reminder, these collectible cats invaded Ethereum at the end of 2017, causing significant network congestion.

Faced with this major scalability issue, the Dapper Labs teams decided to explore the possibility of building their own blockchain. This is how the Flow blockchain was born, created specifically for NFTs.

Blockchain flow from and for the creators of NFTs

As we just saw, Flow was created by Dapper Labs after a disappointment during the launch of CryptoKitties.

In practice, the Flow blockchain ensures its consensus through Proof of Stake. While most PoS blockchains have two different nodes, namely validator nodes and full nodes, Flow has revised this model by offering 4 different types of nodes, allowing for greater NFT adoption: 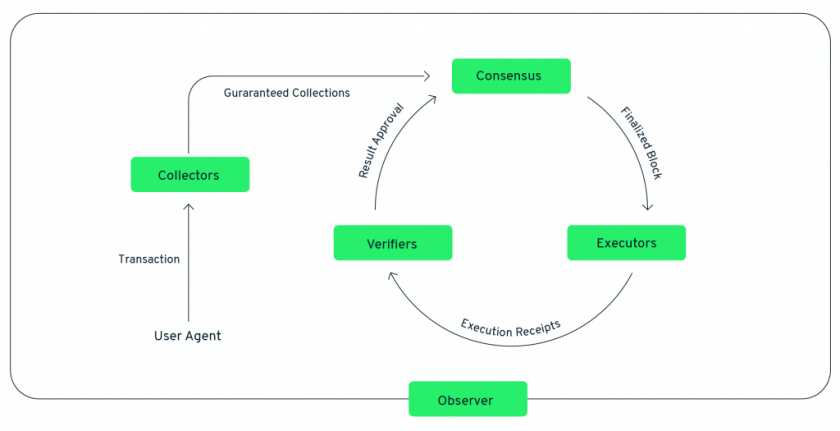 Types of nodes and their interaction.

Also, block rewards are not limited to validator nodes. Thus, each of the four types of nodes allows the generation of FLOW tokens.

This blockchain has been in the spotlight since the launch of the “NBA Top Shot” NFT project. A colorful project that has earned more than a billion dollars since its launch.

More recently, the project announced an improvement to its decentralization by reducing the number of validator nodes owned by Dapper Labs. Now the project teams own only 32% of the nodes.

Cryptocurrency race has begun! Despite the fact that the Meta has taken a good head start, it can still be made up. To do this, quickly register on the PrimeXBT platform (commercial link).