The GeForce RTX 40 series has finally been unveiled, but in true Nvidia style, CEO Jensen Huang didn’t delve too deeply into raw speeds and streams when introducing the RTX 4090 and 4080 during his GTC keynote. After all, there is very little time for these things, and the mass audience doesn’t like to sift through the verbal descriptions of technical footnotes. Luckily, Nvidia’s website has key technical details missing from the presentation – details that confirm some very interesting facts about these new “Ada Lovelace” graphics cards with a GPU.

In a deep anti-consumer move, Nvidia is releasing a pair of GeForce RTX 4080 offerings ostensibly differing in memory size. In the end, Nvidia just gave them the names “16GB RTX 4080” and “12GB RTX 4080”. But while Huang didn’t mention it, these two 4080s will also offer incredibly different base specs.

As you can see in the chart above, not only does the GeForce RTX 4080 12GB have less memory, it also has a much narrower 192-bit bus and 21% fewer CUDA cores. This means it will be significantly slower than the 16GB model, most of the time. Naming these two very different GPUs by the same name is sure to cause confusion among graphics card buyers.

Custom RTX 40 series cards do look quite thick and will likely be the only option for 12GB GeForce RTX 4080 models. 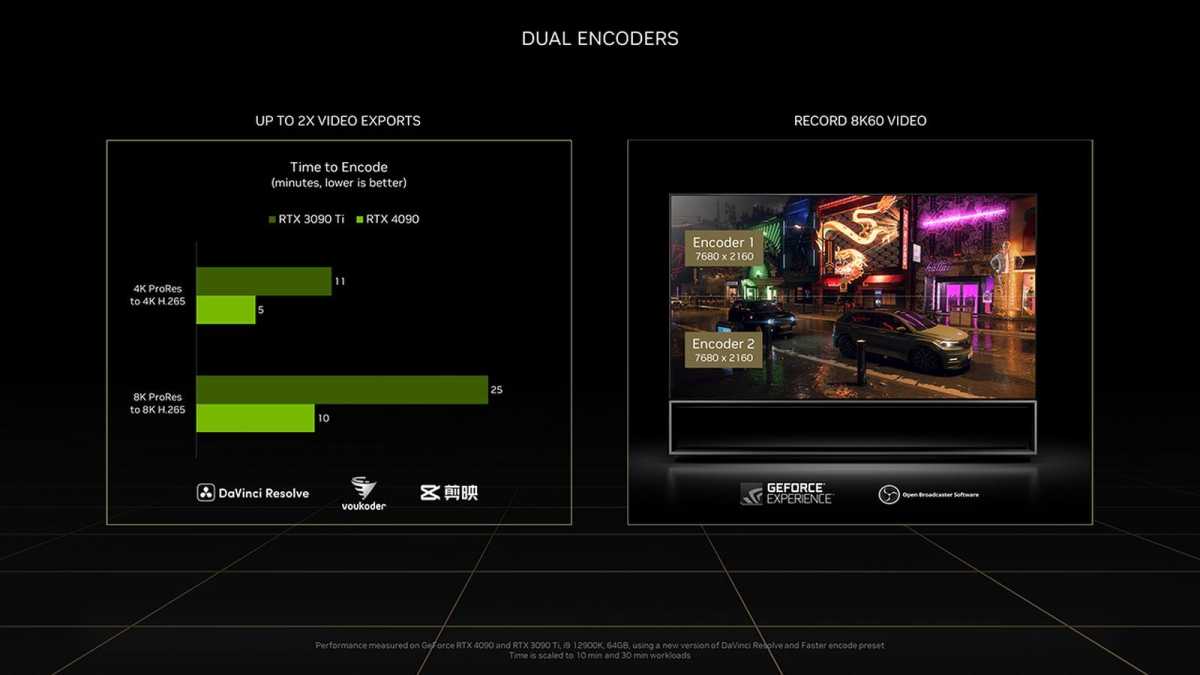 AV1 encoding is the holy grail for media creators, offering much better visuals at much lower bandwidth requirements. Intel got ahead of AMD and Nvidia by including killer AV1 encoding in its Arc graphics cards, but footnotes to Nvidia’s RTX 4090 and 4080 specs indicate that Team Green will support AV1 encoding in this generation as well (AV1 decoding was already supported).

You read that right – not one, but two NVENC encoders with AV1 encoding support in the RTX 40 series graphics cards. Streamers, take note.

DLSS 3 is not suitable for older GPUs

Obviously, the latest generation of GPUs will not include next generation hardware encoders. But Nvidia’s much-touted DLSS 3 software feature won’t be coming to the 20-series and 30-series RTX cards either, though DLSS 2.0 and 2.1 have been ported to both. On the Nvidia GPU generation comparison page, DLSS 3 is only listed for the RTX 40 series, while the older generation RTX offerings are still listed with DLSS 2.0.

This is because DLSS 3 software requires hardware that is simply not available in older GPUs. Nvidia spokesman Brian Burke explained the situation to PCWorld via email:

DLSS frame generation uses the RTX 40 series high-speed optical flow accelerator to calculate the traffic flow, which is used for the AI ​​network, and then executes the network on 4th generation tensor cores. Support for previous GPU architectures will require further innovation and optimization of the optical flow algorithm and AI model.

You need a bigger boat

The GeForce RTX 4090 doesn’t draw the 600+W that some early rumors suggested – at least not in the Nvidia Founders Edition – but it’s rated at 450W with a recommended PSU of at least 850W. This is in line with the latest generation flagship RTX 3090 Ti. As we said then: you will need a bigger boat. And by boat, we mean the power source. However, this is not all expensive news. While the RTX 40 series supports the 12-pin VHPWR connectors used in the new ATX 3.0 power supplies, you’ll also be able to use three or four standard 8-pin power connectors if you already have a sturdy power supply.

NVLink is dead for GeForce

Nvidia’s SLI technology for multi-GPU rigs has been dead for some time, but the “NVLink” technology that replaced it has remained in the latest generation of RTX 3090 GPUs. No more. The GeForce RTX 4090 and 4080 spec pages explicitly state that NVLink is not supported in this generation. For one exit.

That’s all there is to these buried treasures. We’ll be sure to learn more about the GeForce RTX 40 series in the coming days and weeks, but again, for the full details of Nvidia’s new graphics cards, check out our GeForce RTX 4090 and 4080 announcement roundup.

Editor’s Note: This article has been updated to include comments from Nvidia’s Brian Burke.