Update September 29, 2020 : it is becoming clearer for the new 12.5-inch Surface PC which would respond to the name “Surface Laptop Go” and which could be presented on October 1st, the latest rumors have been added below.

Of all the Surface tablet and PC models, the Surface Go is offered at the most affordable price, a cheaper version than the Surface Pro for those who do not want to invest as much while enjoying the quality of the range. When you want a traditional laptop and not a tablet with a keyboard, there is the Surface Laptop which does not have its entry-level equivalent. It could change.

Microsoft would indeed consider releasing a laptop model in the classic entry-level format, which would logically complete the Surface range. The first information was revealed by Zac Bowden of the Windows Central site which gives details on the configuration of the device. This would offer in its most modest version a 12.5-inch screen, against 13.5 inches for the Surface Laptop, an Intel Core i5 processor, 64 GB of storage and 4 GB of RAM.

The type of processor used would be that of 10th generation Intel while the processor manufacturer has just announced the 11th generation Intel Tiger Lake. This would allow Microsoft to get better prices for this component and set a retail price of $ 500-600 while the Surface Laptop 3 trades with a starting price close to $ 1000.

A few days later it was the turn of the German site Winfuture.de to reveal some echoes. If the processor mentioned does not change, it would be more precisely the Intel Core i5-1035G1, a more muscular configuration with 8 GB of RAM would also be there. According to sources that the publisher considers reliable two versions of the one that will be baptized “Surface Laptop Go” could be presented, one for the general public or education, the other for companies with Windows 10 Pro.

The most accessible price would be around 599 euros for the most modest version, 649 euros for the version intended for professionals. Unlike the classic Surface Laptop version, the infrared camera would be replaced with a fingerprint reader on the power button. Regarding the release date we could be fixed very quickly since the rumors speak of a presentation this week, Thursday October 1st. 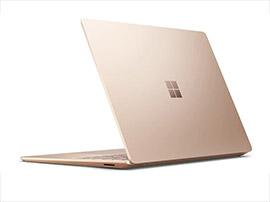 The Surface Laptop 3 from Microsoft in its 13.5-inch version is a computer that has a design that does not leave marble with beautiful finishes but which also offers powerful configurations while maintaining weight and pleasant daily use.

If the components will be a little less powerful, however, Microsoft does not intend to save on the quality of manufacture specific to the Surface range, with a machine with neat finishes and a light weight. It could also be a question of an evolution of certain machines of the current Surface range, in particular the Surface Pro X, which embeds an ARM processor.

For some websites, Internet Explorer will redirect to Edge

Microsoft CEO Satya Nadella calls for a “referendum on capitalism”

Minecraft: From 2021, you will need a Microsoft account to be able to play

For some websites, Internet Explorer will redirect to Edge

Microsoft CEO Satya Nadella calls for a “referendum on capitalism”

Minecraft: From 2021, you will need a Microsoft account to be able to play