The size and scope of the cryptocurrency industry has grown significantly. The growth of crypto users since 2014 continues to follow the trajectory of the Internet in the 1990s.

According to Triple A’ Research, a Singapore-based digital asset payments company, global cryptocurrency holdings averaged 4.2% this year, which means over 320 million digital asset users worldwide, with the United States leading the way. with 46 million users.

Despite price fluctuations and bear markets, the overall cryptocurrency market capitalization and trading volume have grown over the past decade. These indexes demonstrate that bear markets are not holding back the adoption of cryptocurrencies, but are consolidating them. 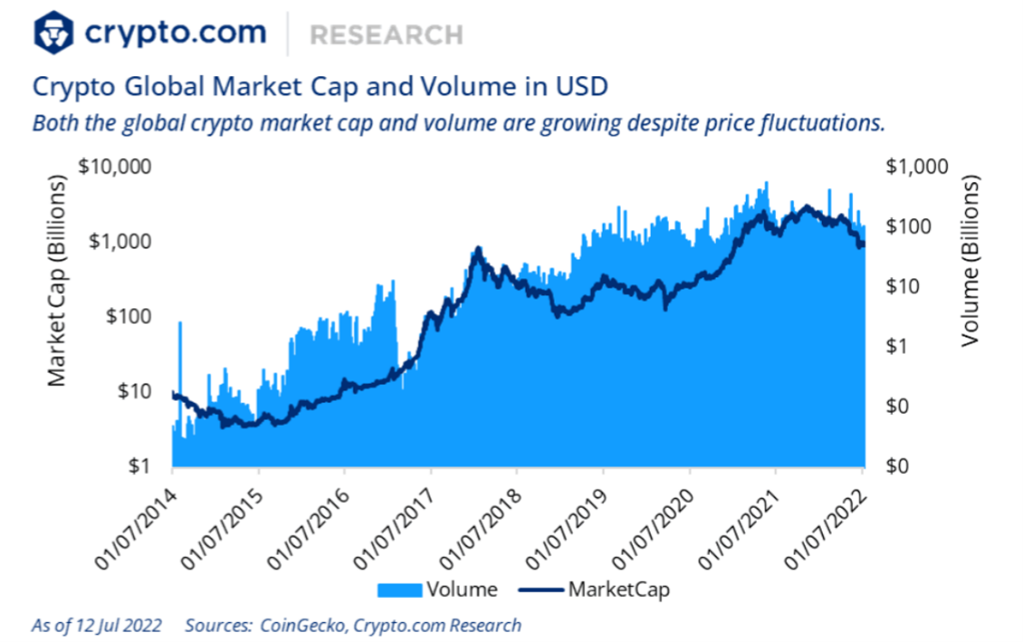 If the use of cryptocurrencies is clearly on the rise, what about the level of adoption by traditional financial players?

After the cryptocurrency bull market in 2021, institutional investors are becoming more and more familiar with this new asset class. The institutional acceptance of any tradable asset is a gradual process that is accompanied by the maturation and development of the asset in question. Cryptocurrencies are no different.

Cryptocurrencies have been around for over a decade. As in other industries, decentralized financial instruments like DeFi were originally intended for individual consumers, but their growing popularity and use has left large institutions no choice but to start defining their strategies for integrating cryptocurrencies into their business models.

As a result, institutional investors such as hedge funds and pension funds are becoming more accustomed to cryptocurrencies.

The “Global Crypto Hedge Fund Report 2022” published by PWC revealed that more than a third of traditional hedge funds currently invest in cryptocurrencies. Pantera Capital, founded by Dan Morehead in 2003, launched its first cryptocurrency fund in 2013. Recently, Braven Howard, a global asset manager with $25 billion in assets under management, completed the launch of the largest crypto fund with over $1 billion raised from institutional investors.

According to the latest Fidelity Digital Assets survey, the majority of institutional investors are interested in digital assets, with almost 8 out of 10 organizations surveyed responding that cryptocurrencies and digital assets “have a place in the portfolio.”

The EY report mentions that almost a quarter of fund managers plan to increase their stake in crypto assets over the next two years, while in 2021 alone, institutional inflows into the crypto markets reached an all-time high of $9.3 billion, representing 36% . increase from 2020.

JP Morgan Chase, Morgan Stanley, Deutsche Bank, and Goldman Sachs have opened up the bitcoin space to their clients. Goldman Sachs recently announced that it is now offering its first-ever Bitcoin-backed loan as part of a major expansion of its crypto footprint.

The following month, Fidelity said it would allow savers to funnel some of their retirement savings into bitcoin through the company’s 401(k) investment plan package.

Finally, BlackRock’s jump into crypto is a strong sign that institutions are looking beyond market volatility. Indeed, the world’s largest asset manager has said it is partnering with Coinbase to provide access to cryptocurrencies to its institutional clients.

Blackrock and Fidelity alone manage over $12 trillion in assets. Although Bitcoin is known to have a market capitalization of less than $400 billion, its adoption is still in its infancy.

These various investments made by a large number of major financial players over the past 12 months and related to the creation of infrastructure for bitcoin and cryptocurrencies are another indication of the expectations regarding the adoption of crypto assets by institutions in the long term.

As seen in the chart below, a growing and significant proportion of less constrained institutional investors such as family offices have already begun to allocate a small portion of their holdings to direct cryptocurrencies.

Create an environment conducive to the growth of cryptocurrencies

Cryptocurrencies are clearly gaining momentum at the institutional level, but this does not mean that they are widespread. Regulation, trust, and infrastructure remain a major barrier to market entry for many institutions looking to expand their crypto offerings. An important step in achieving this is to establish rules for this asset class.

Having access to exchanges that are compliant, secure, and provide clear, real-time price estimates will be vital to address these operational challenges by providing institutions with the toolset they need to use and integrate cryptocurrencies into their services.

Another element of reluctance from institutional investors concerns the carbon billing of blockchain technology and its treatment as an asset that does not meet the ESG criteria.

Specifically, Ethereum should move from a Proof-of-Work (PoW) consensus mechanism to a Proof-of-Stake (PoS) consensus mechanism, which is much less energy intensive. This should allow the blockchain to reduce power consumption by more than 99%. As such, post-merger Ethereum could feature prominently in the future portfolio allocation. The transition could make Ethereum more attractive to climate-conscious investors who have so far shied away from cryptocurrencies. Pension funds and other asset managers are facing external pressure both from regulators pushing the industry to take more sustainable measures and from investors demanding more sustainable investments.

What are the next steps?

Cryptocurrencies, most notably Bitcoin and Ethereum, are emerging as a new asset class. However, we are still only at the beginning of the journey.

Institutional investors have unimaginable amounts of capital, and if they invested at least some of their assets in digital currencies, we could see a significant increase in prices.

A quick calculation shows that if U.S. pension funds were to allocate 1% of their total assets to bitcoin, that would represent 60% of bitcoin’s total market capitalization.

In general, it is better to prepare for this!

O Kryptonite AM: Criptonite Asset Management SA is an asset management company based in Geneva, Switzerland that manages and develops investment products focused on digital assets. Managed Products are for institutional and qualified investors only. Kryptonite is regulated by the Financial Market Conduct Authority (FINMA).