After the sudden eruption of the Nyiragongo volcano on Saturday, in the east of the Democratic Republic of the Congo (DRC), humanitarian aid is being organized with one priority: access to water.

Raphaël Ténaud, the head of delegation of the International Committee of the Red Cross (ICRC) in Goma, is clear: “the urgent problem is water”, in a town which is partly deprived of drinking water. Even before the support for the displaced, whose number is still being assessed, and the reunification of families.

QUESTION: Who are the victims, how many are there?

ANSWER: There was no warning sign, the eruption took everyone by surprise, it added to the humanitarian damage. The lava destroyed four main villages and 12 other villages were secondarily affected by the flow.

The victims would number in a few dozen, caught in fires and toxic gases. We are talking about dozens of homes destroyed.

People have moved very quickly, so the biggest humanitarian consequences are for the displaced. The other direct victims, delayed, are those who are deprived of public services damaged or destroyed by the lava flow.

The whole city is also considered as an indirect victim, because the lava cut the Goma-Butembo road, the main supply axis for the city of Goma.

The same evening and the day after the eruption, there were around 25,000 displaced: 17,000 west to the locality of Sake, and 7,000 to Rwanda. Many of these displaced people have started to return to Goma, some even returning to the disaster scene, near the lava flows.

Some of them remain displaced for fear of returning, another part has been able or may return to its quarters, and finally there are those who no longer have homes.

We do not have an exact figure, these movements are in progress, we are in the process of evaluating their number. But distraught people, haggard eyes, contemplate the flow without really knowing what to do.

Q: What are their needs?

A: Their immediate needs are to have shelter, to put a roof or a tarp over their head, non-food items essential to the life of the household, food, and all sanitation issues. 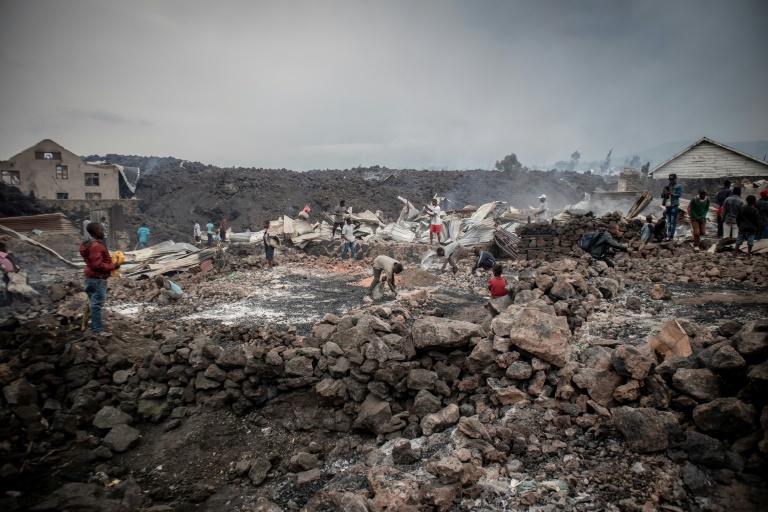 Residents try to recover their belongings after the lava flow, in Goma on May 23, 2021 (AFP – Guerchom Ndebo)

The victims of damaged public services are estimated at 550,000 people, a water tank having been partly destroyed, according to an estimate of another humanitarian agency. The major problem will therefore be a problem of access to drinking water, and all the consequences that this can entail. Epidemiological surveillance therefore becomes a priority.

In this context, the urgent need is water. The ICRC will put an old disused pumping station back into service and provide it with the fuel to keep it running. This will be completed with water transported by tanker truck.

Hospitals in the east of the city have been closed for the most part. Four hospitals in the west are now referral establishments, the ICRC will support them (…). There will also be distribution of cash and kits of basic necessities to the homeless displaced persons.

Q: What about lost children?

A: Finally, there is the re-establishment of family links, a specialty of the ICRC, because there have been many children separated from their parents. In collaboration with the Congolese Red Cross, we try to reconnect the children with their parents, and in the meantime we offer them assistance.

To date, we have received 735 requests from parents. There are however a lot of spontaneous meetings, so we hope that this number will go down on its own. So far, we have had 31 family reunions.

In the meantime, we all live in fear of another rash.

But in general, this volcano crisis hides another, much more violent one, that of violence, which has lasted for almost three decades, and which never ends, and that is why all the humanitarians are there. at first sight.