Long before Alien: Isolation, the alien saga terrified PlayStation, Saturn and PC players thanks to the Alien Trilogy.

Mid-90s: Alien saga fans are buzzing. After the failed projects of Joss Whedon and Danny Boyle, Alien in Arles 4 was finally set to come to life under the direction of Jean-Pierre Jeunet. Alien, the resurrection is expected in 1997 and was supposed to mark the great return of the sticky beast G.R. Giger.

Then the owner of the Alien license for use on PC and consoles, Acclaim smelled a good vein, and the firm’s experts told themselves that it was time to restart the video game franchise. While the company is known for its licensed sports games such as NFL, NBA Jam, WWF, and the Mortal Kombat series, the firm has not capitalized on a very rosy aura regarding adapting licenses for small and large screens.

The Simpsons: Bart vs. Space Mutants or Batman: Forever have caused nervous breakdowns and trampled on the innocence of many players who forever curse Acclaim. Nothing could have imagined that an American box could give birth to such a memorable title as Alien Trilogy. Back to the planetary alignment that allowed everyone to hear your cry.

Find our ranking of the best alien games here.

Even the jacket was terrible

Acclaim Entertainment wanted the Aliens trilogy to be released on the PlayStation 1 in July 1996, four years after the controversial Aliens 3, while JP Jeunet was hard at work on Aliens Resurrection. The American firm then had two clear goals for its alien trilogy: to capitalize on the hype generated by the beast’s future return to the big screen to secure maximum market share, and to inspire gamers (and therefore a new generation of potential viewers). ) to look into this saga, often the poor relative of video games.

At Acclaim, executives had no doubt that a subsidiary would take on a project to adapt the video game of the Alien franchise. The Americans have just acquired the English studio Probe Software, which has just been renamed Probe Entertainment. The British have already completed pre-commissioning work for Acclaim, including the conversion of Mortal Kombat 1 and 2 for PC and Terminator 2: The Arcade Game. 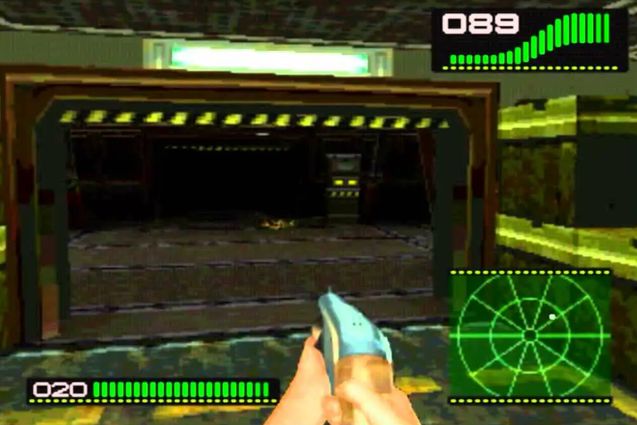 The probe was the property of a visionary creator: Fergus McGovern, a video game aesthete with a passion for cutting-edge technology. When Acclaim entrusted him with the Alien license adaptation, McGovern saw a lot. He did not want to give birth to action, using the advantages of this or that film, but set himself the goal of collecting the entire saga in one game.

It was meant to be a startling, suffocating title that could restore the franchise’s terrifying DNA. Never saw. Since McGovern never liked to follow established paths, he was able to convince Acclaim to give him free rein with regard to all game and level design.

Unlike previous video games in the Alien saga, Alien Trilogy will not be a beat’em up arcade game or a metroid. For McGovern, a Tomb Raider-style 3D action movie was out of the question. He wanted to develop a first-person shooter, which was a major challenge, knowing that the target platform was Sony’s first PlayStation. 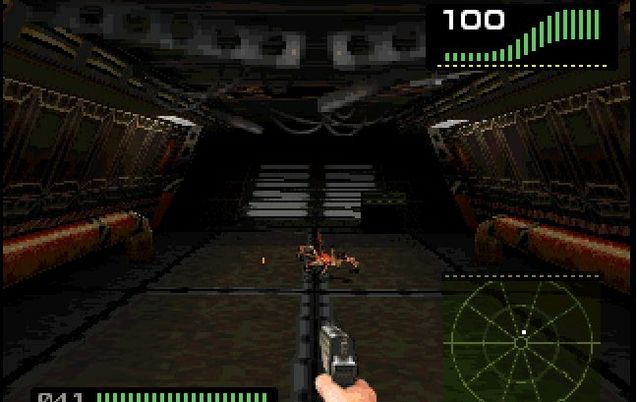 Live your life as an FPS on PS1

Fergus McGovern wanted the Alien trilogy to be a real technical breakthrough. During the conversion of MK 1 and 2 on PC, Probe Entertainment acquired a certain skill in digitizing and digitizing the real model into a 2D model. With the advent of motion capture, studio executives wanted to take it one step further and move on to digitizing real people in 3D models. Thus, Alien Trilogy was supposed to be the first video game created using 3D motion capture thanks to the teams from the Advanced Technologies Group.

From the human characters to the creatures roaming the dark halls of Nostromo and the planet LV-426, all models benefited from motion capture, making each monster’s movements extremely believable. Facehuggers, chestbursters, alien dogs, synthetic humans, “classic” xenomorphs and alien queens were screaming the truth. If the movements were far from 60 frames per second, the creatures moved with amazing fluidity for a PS1. 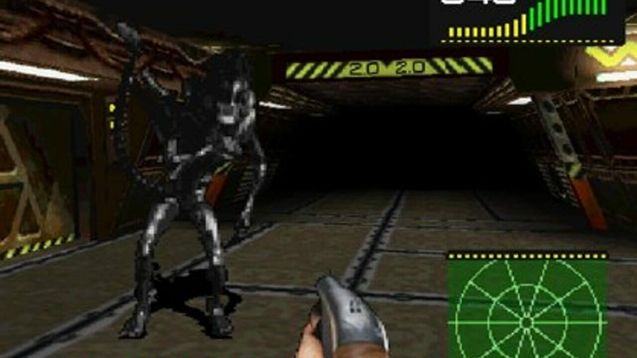 Watch these critters run and die

However, there was no question of being satisfied with a technical demonstration. It was meant to serve the story and atmosphere true to the cinematic trilogy. While it was originally suggested to follow the trilogy of films in chronological order to tempt xenomorph fans, McGovern ended up foisting on an alternative scenario.

In the Alien Trilogy, the heroine is Ellen Ripley, but she is part of the Space Marines and is bad with heavy weapons and explosives. The story begins with the arrival of a detachment of marines, including Ripley, on LV426, when all contact with the colony that settled on this planet was lost.

Obviously, everything went wrong, and you will have to play shotgun and machine gun to bring the xenomorphs to the state of elementary particles. To make matters worse, the other Marines are gone, leaving Ripley alone on this star, which is teeming with creatures as evil as they are sentient. 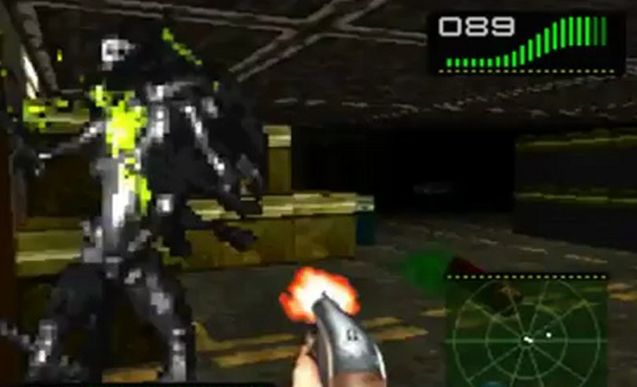 If he bleeds we can kill him

There were about thirty levels in the title, the first ten were dedicated to the movie Aliens, the next ten were dedicated to the prison planet Fiorina “Fury” 161 from Alien 3, and the last ten meant the return to the ship of the engineer, filled with nests of xenomorphs from Alien 3. Alien 1. Instead of just providing an alibi for this xenomorph chain massacre, Probe Entertainment designed the game around a sequence of missions to complete.

In doing so, the title has deepened considerably and separated itself from the mass of 3D-like Doom/Wolfenstein, offering a scripted adventure with context placed in front of each mission via a text panel. The idea is as simple as it is effective. 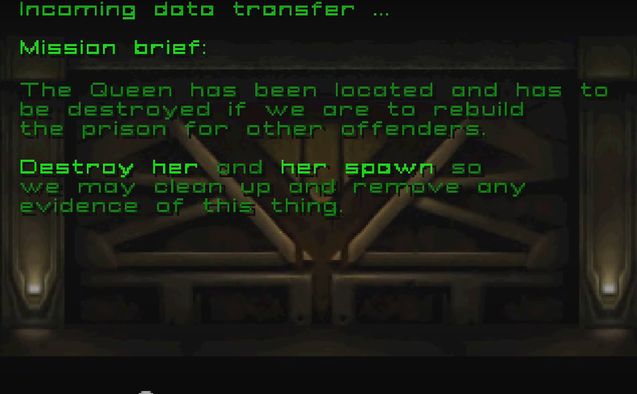 Despite the PS1 version finding just under 500,000 buyers, Alien Trilogy was considered a huge hit with both the public and critics until it received the sacred title of “Game of the Month” in the very respectable Electronic Gaming Monthly for April. 1996. This game was even one of the fastest selling games in the PS1 catalog after it was released.

Despite a few technical shortcomings, including rather obnoxious pixelation and scaling effects, Probe Entertainment’s software captivated gamers with its unsettling atmosphere that perfectly recreated the very special atmosphere of the Alien saga. An atmosphere backed up by sound design work that was more than impressive for the time and just as compelling almost thirty years later. 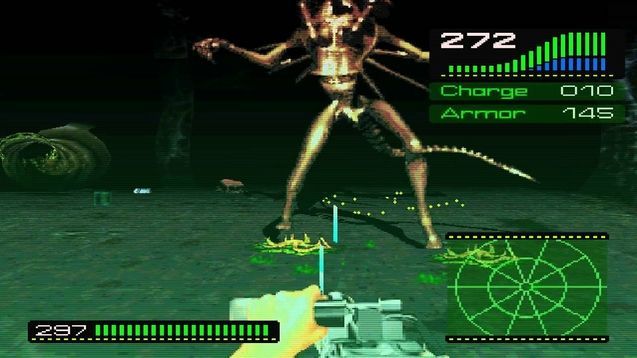 “Get away from her, bitch!”

Fergus McGovern made it a point of honor that most of the sound effects were taken directly from the films of the franchise, which added to the credibility of the adventure and made the journey even more claustrophobic. Headphones screwed onto your ears, signals emitted by a motion detector (the player’s best friend), the whispers of cocoon prisoners whispering “kill me”, and the screams of xenomorphs still chill the back.

Following in the footsteps of its cinematic models, Alien Trilogy has been able to multiply particularly emotional episodes. Encounters with not one but three different alien queens made an impression. And what about this final level, which pays homage to one of the series’ iconic scenes, with a deep dive into the nest of facehugger eggs from the first film, except that it was supposed to provide some night terrors. Ripley had to survive among dozens of facehuggers desperately trying to come and lay their eggs down her throat. A real nightmare, as memorable as it is traumatic. 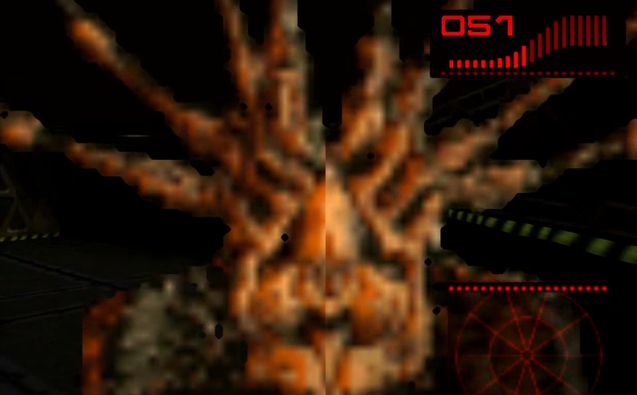 Horrible scene that makes you want to hide the game under the furniture.

More than a cult object for fans of the Ridley Scott-created franchise, Alien Trilogy also became one of the first effective contacts between the FPS, still called “Doom-like” at the time, and console players. Released in 1996, a year before the release of the main console FPS Goldeneye 64, the game surprised the intuitiveness of the controls, providing quick and efficient control. The success in terms of gameplay is all the more remarkable because in 1996 the PlayStation Pad did not have a joystick, but only a cross.

Given the game’s success on the PlayStation, Acclaim asked Probe Entertainment to port it to the PS1’s direct rival: the Sega Saturn. Released six months later, this version paid for hardware less suited to 3D display than its competitor. As such, the Saturn version was less fluid, suffered from heavy slowdowns and duller textures. 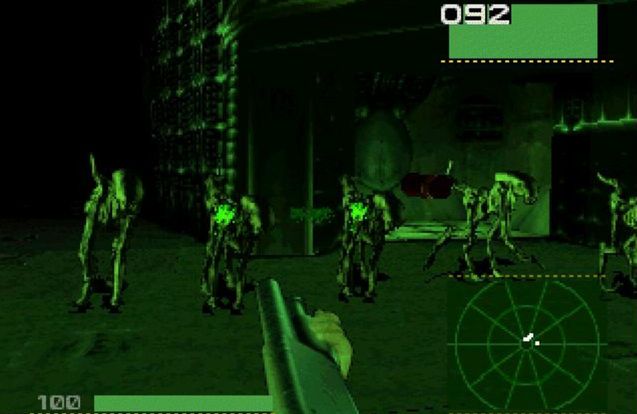 A version of Saturn that stings the eyes

Highly sought after by computer enthusiasts, Alien Trilogy has also been ported to MS-DOS. But while PC gamers have been waiting for liberating keyboard and mouse gameplay to unleash the full potential of this game, they’ve been stuck with a 100% keyboard configuration that was most frustrating or required to play with a controller. Luckily, modders were able to implement the keyboard and mouse hack a few months later.

After the Alien Trilogy, thrill-seekers, fans of the xenomorph saga, went through a long lean period. They had to wait until 2014 for the masterpiece Alien: Isolation to satisfy their thrill cravings. Designed by The Creative Assembly and published by Sega, the centerpiece remains unsurpassed to this day.