Internet operators can sometimes provide good speeds to areas already covered by the fibersometimes there is still a problem to be solved for the end user. The boxes offered by operators, and sometimes even routers from specialized manufacturers, do not always have the power necessary to bring the network and the Internet to the entire household.

Thick walls, large spaces, remote rooms … the solution to this problem is offered by wireless mesh systems (or WiFi Mesh) which communicate via several modules to remedy this problem. Today we are discovering that of Amazon, the eero 6, which has the advantage of being compatible with Wifi 6, the new Wifi standard which will eventually replace the current one.

The case is pretty and highlights the small size modules placed in the box, the smooth and shiny coating of which we immediately notice. We already suspect that Amazon did not choose a design at random.

By unpacking we discover the three devices (it is possible to buy packs of 1 to 3 modules and even additional modules), the three space-saving power outlets that supply power via USB-C and an Ethernet cable.

By manipulating them we notice that the three are not quite identical. The one that acts as a router has two Ethernet ports on the back while the satellites only have one USB-C port for power. 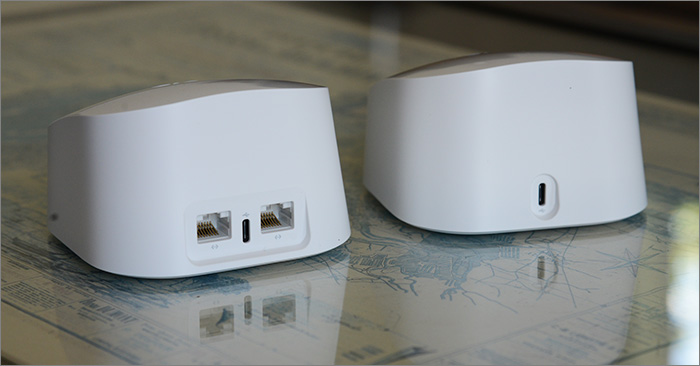 The underside of the devices does not offer the possibility of hanging them vertically. On the other hand, they are covered with a non-slip material which guarantees that they will not slip, even on a slightly inclined surface. 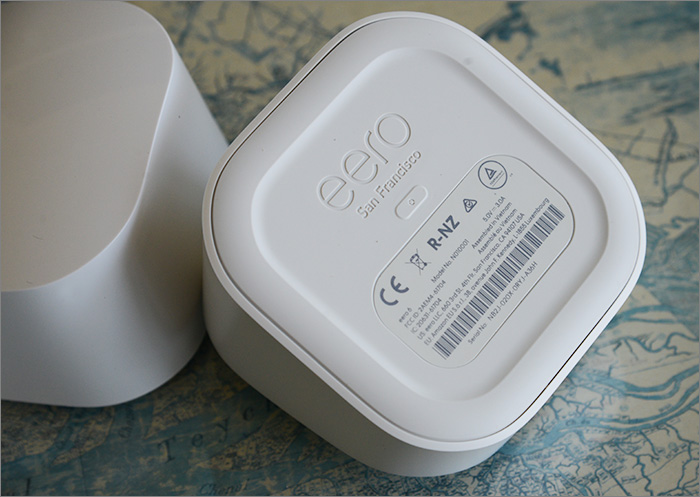 The quick start guide is very brief and invites us to unplug our routers and modems already in place after installing the eero app from the Google Play Store or the Apple App Store. We are then guided by an assistant who invites us to connect to an Amazon account, or to create one.

As we have seen the back of the devices does not have any indication of an SSID network name or Wifi key. Once the first device is plugged in, the main router, connected to the Internet via our operator modem, detects the presence of the eero 6. It offers us to indicate its location (we will see that this makes it possible to identify it in the application by the suite), and enter the network name and password of our choice.

Here we have deliberately chosen to indicate information identical to the network of our box to see if this could create conflicts. This was not the case and allows having to avoid reconfiguring all the devices connected to our home wireless network. 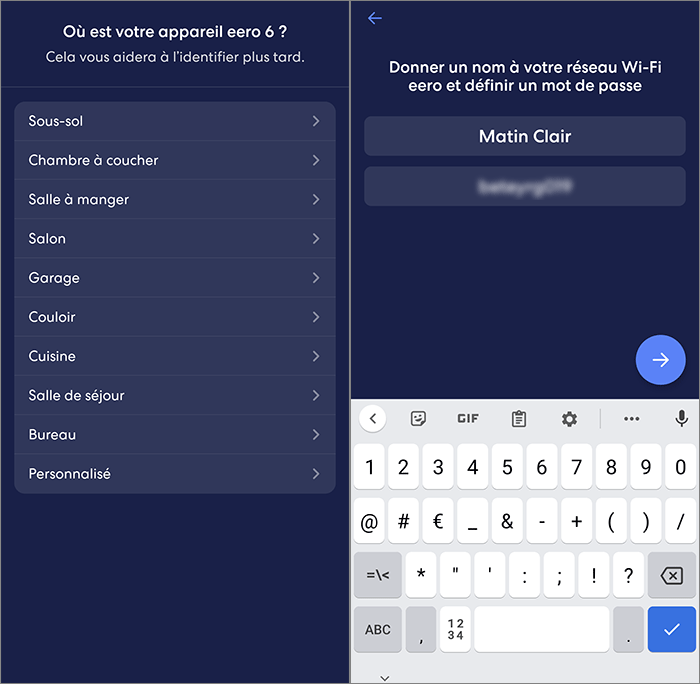 Adding the following devices works in an identical mode: connection to the device’s mains, pairing, success. After that we find ourselves in the main interface which gives the vision of our new network with its router connected to the Internet and the two models strategically placed in the house.

Note that once connected, it is possible to move an eero satellite to place it in another room without having to redo the configuration. The application settings also allow you to correct the name of the Wifi network or its password if necessary. Already, in the interface, the first elements connected to our modules appear and are listed on the main page.

The installation is therefore extremely simple, even for those who are not familiar with network devices, it is already a good point. It will take some observation time and other tests to assess the improvement in coverage and the capacity of the system in terms of throughput. The results will be added following this article in a few days when the full test is published.