Official: Ryzen 7000 is coming in less than a month. This week, AMD talked about its upcoming Zen 4 processors, giving us details on pricing, availability, processor launches, and more during a livestream from Austin, Texas.

We’ve got the full technical rundown for you in our roundup of the AMD Ryzen 7000 presentation, but if you’re looking for the highlights, here are the top five takeaways.

Mark your calendars, the first Ryzen 7000 processors go on sale on September 27th. AMD’s initial lineup of the first 5nm chips almost mimics its predecessor’s Ryzen 5000 lineup, but with some interesting twists.

However, more juice means stronger chips. The flagship Ryzen 9 7950X processor boasts a whopping 800 MHz clock speed increase over the 5.7 GHz 5950X. You’ll see higher base and boost clocks across the board, with the 7600X also breaking the 5GHz clock threshold (and thus boldly going where the 5600X has never been before).

Wondering where the 5800X’s successor is? When asked, AMD delicately sidestepped the issue. But given everything that was revealed during the event and the interviews that followed, the 5800X is likely the place in the stack where the 3D V-Cache Ryzen 7000 processor may later appear. AMD also gave Threadripper fans a little hope. 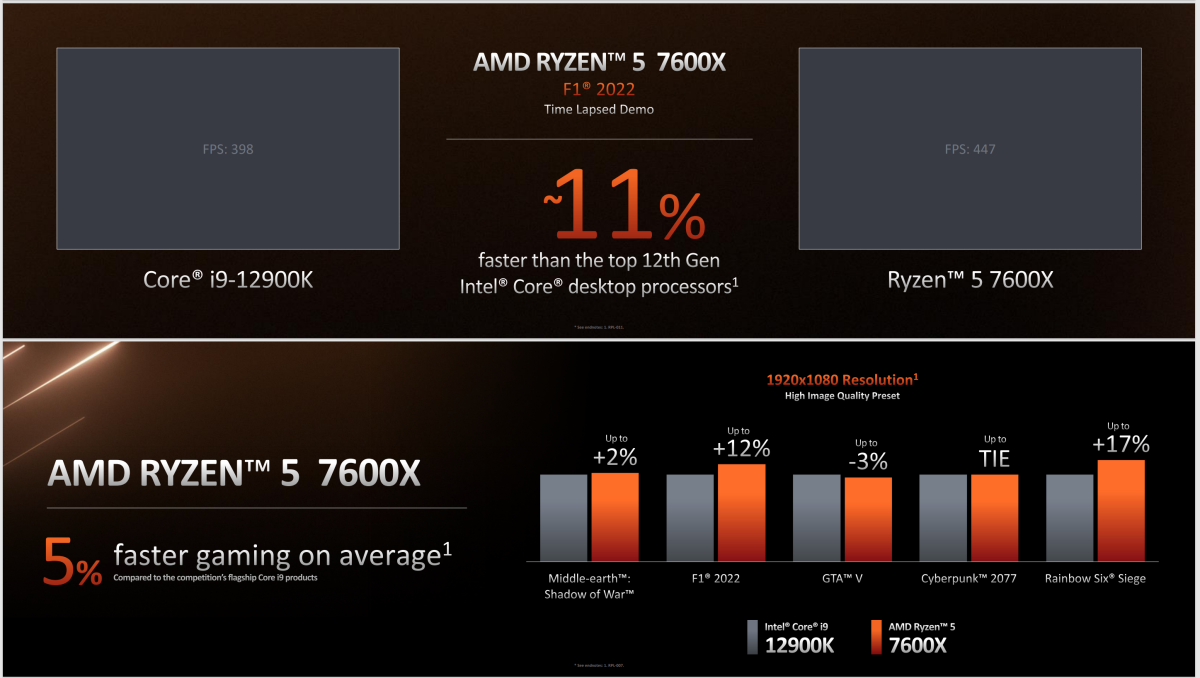 The matchup between AMD and Intel remains a fierce battle in which consumers emerge as the winners. Case in point: According to AMD, the Ryzen 5 7600X processor, supposedly a mainstream chip, can outperform the Intel Core i9-12900K in games. In Team Red’s F1 2022 test, the 7600X and its higher single-thread performance outperformed the 12900K by 11 percent. Overall, the 7600X edged out the 12900K in games by an average of 5 percent.

At the other end of the scale, AMD claims the flagship Ryzen 9 7950X processor outperforms the 12900K by 23% in games and 62% in content creation tasks.

These head-turning claims are fueled by the Ryzen 7000’s massive performance boost. Forget what you heard from AMD at Computex 2022 about an 8-10% IPC boost. Those modest figures have now been replaced by a more substantial claim of 13 percent. And this increase in CPU efficiency, combined with the dramatic increase in Ryzen 7000 clock speeds, ultimately results in an average 29% increase in single-core performance for the 7950X over the 5950X.

And according to AMD, this increase in performance comes not only with the TDP remaining (relatively) low, but with much better power efficiency than the competition. AMD claims its Zen 4 chips outperform the best Intel processors by 47 percent in terms of the performance you get per watt.

With the Ryzen 7000, expect high-octane computing where there’s no apology for looking at the most comfortable, fastest PC ever. 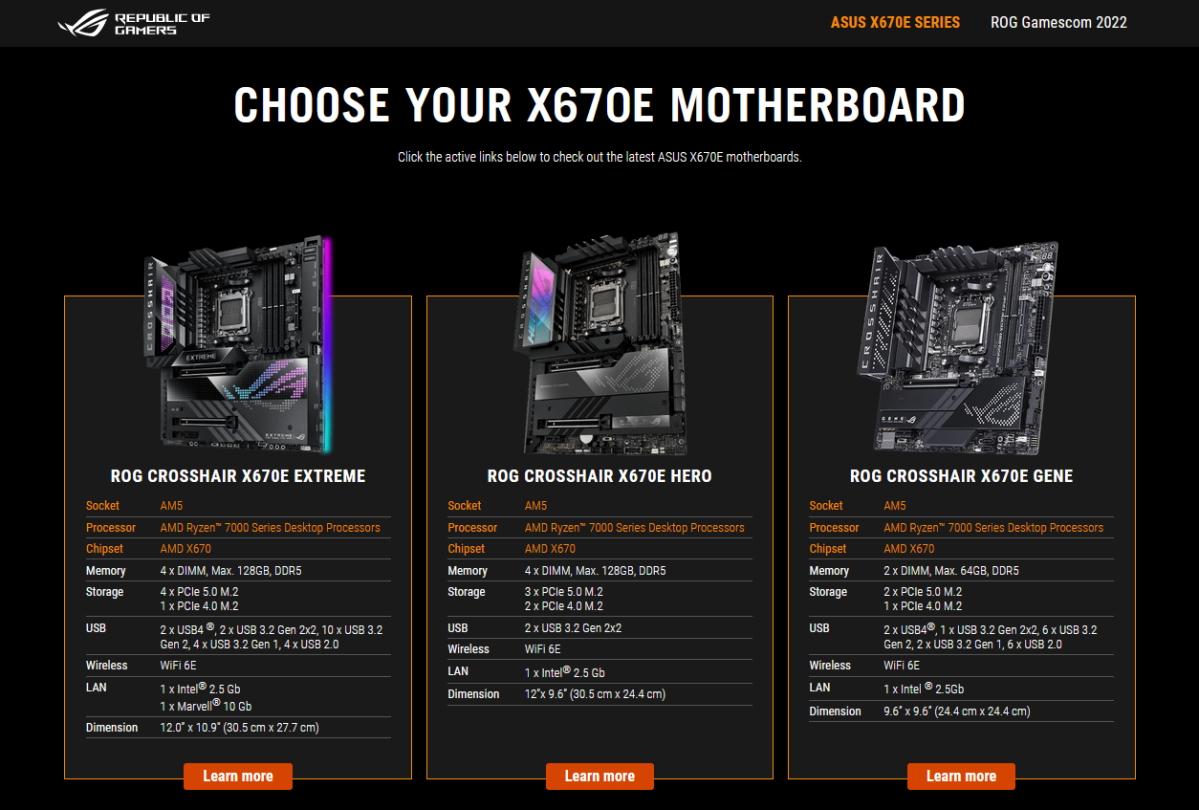 Part of the Ryzen 7000’s performance-focused focus is on the AM5 motherboards that will be paired with the Ryzen 7000. As we’ve known for a while, they’re only compatible with cutting-edge DDR5 memory and support future PCIe 5.0 SSDs, so don’t expect a dime when Zen 4 build launch. (Current PCIe 3.0 and 4.0 SSDs will also work with AM5 motherboards.)

Those with the cash can purchase the X670E and X670 boards during the Ryzen 7000 launch in September. The B650E and B650 boards will arrive in October. The E variants will support PCIe 5.0 for both GPU and storage, while the standard versions will only support PCIe 5 storage. You will still be able to overclock CPUs and memory on all chipsets. Pricing starts at $125, but expect premium X670E motherboard prices to be sky-high. If Intel’s boosted Alder Lake mobile devices are any indication, spending a minimum of $400 wouldn’t be out of the ordinary.

Sounds painful? Well, AMD has confirmed that you can still use your AM4 coolers with AM5 boards and save a few bucks there. (To learn more about how this design decision impacted the move to the LGA socket, be sure to check out our post-event interview with AMD.) No later than 2025.

As revealed at Computex 2022, the Ryzen 7000 includes integrated Radeon graphics across the stack for the first time. The graphics cores aren’t as powerful (or plentiful) as AMD’s APUs like the Ryzen 5 5600G and Ryzen 7 5700G are capable of gaming. But, as discussed with AMD during the PCWorld interview, two RDNA2 compute units in Ryzen 7000 processors will be enough to drive four monitors and power up media encoding and decoding accelerators. AMD has also teased that an Intel counterpart to Quick Sync is coming soon – a potential boon for content creators.

This development may seem like an overkill for some PC builders, given the enthusiastic nature of the first Ryzen 7000 chips. But even X-class chip owners will benefit, as integrated graphics make it easier to troubleshoot PC builds. And when lower stack chips eventually arrive, a discrete GPU won’t be needed for basic builds (like web browsing and other light tasks).

What’s more, when the Ryzen 7000 chips are finally released to the pasture in four to five years (or more), you’ll be able to easily remap them to machines like an HTPC setup or a home server project with little additional cost.

You won’t feel the autumn chill when PCIe 5.0 SSDs finally arrive this November. Their lightning speed should keep you warm. We first saw a teaser of what to expect at Computex 2022 when Apacer announced two PCIe 5.0 SSDs with speeds up to 13,000MB/s. And now we’re also aware of eleven other partners making PCIe 5.0 SSDs, including Corsair, Sabrent, Crucial, and Asus.

Nearly twice the speed of today’s fastest PCIe 4.0 SSDs, the reality-changing transfer speeds of PCIe 5.0 SSDs should please content creators and speed demons alike. When time is precious, these discs will make everything work.

Do most people need a PCIe 5.0 SSD at startup? No. But will it be fun? Absolutely yes.