The James Webb Space Telescope has been in operation for less than a year, but the data it has received is beyond expectations, including stunning images and unexpected scientific discoveries. On Wednesday, January 11, a team of researchers from the James Webb mission announced the first rocky exoplanet confirmed with a telescope. It is almost the same size as Earth and is only 41 light years away.

The James Webb Space Telescope is the world’s first space science observatory. It is an international program led by NASA together with its partners ESA (European Space Agency) and CSA (Canadian Space Agency). Since its launch in December 2021, James Webb has continually broken new ground in scientific advancement and revolutionized our view of the universe.

It recently made it possible to establish the atmospheres of several already known hot exoplanets and to identify carbon dioxide there for the first time. He provided images of galaxies like never before, as well as valuable information about the planets in our solar system. According to Jason Kalirai, Director of Space Science at the Johns Hopkins Applied Physics Laboratory (APL) and a former Webb Project Scientist, “Missions like Webb are some of the most ambitious projects ever undertaken by NASA and have a unique opportunity to answer questions about our planet and its place in space.

Recently, a team of researchers from the Johns Hopkins Applied Physics Laboratory confirmed the discovery of an exoplanet — a planet orbiting another star — for the first time using the James Webb Space Telescope.

Officially registered as LHS 475b, the planet orbits a red dwarf about 41 light-years from our system in the constellation Octance. It is almost the same size as the Earth and is 99% of its diameter. The group’s findings were presented at an American Astronomical Society (AAS) press conference on Wednesday, January 11, 2023.

The team decided to observe this target with Webb after carefully studying targets of interest from NASA’s Transiting Exoplanet Survey Satellite (TESS). This instrument could only hint at the existence of the planet due to the limitations of its cameras and the weak signal from the latter. However, the Webb Near Infrared Spectrograph (NIRSpec) easily confirmed the presence of the planet after just two observations of its transit last summer—the planet passing in front of its star.

To obtain these data, Webb observed the star system LHS 475 for almost 3 hours, starting about 1.5 hours before the passage and ending about 30 minutes after the passage. The crossing itself took about 40 minutes. The curve presented at the conference includes a total of 1158 individual brightness measurements, or about one every nine seconds.

The researchers explain that the planet is very close to its star, making a full revolution in just two Earth days.

APL astrophysicist Kevin Stevenson, one of the leaders of the study, said in a statement: “I think rocky exoplanets are a new frontier for JWST. Just as NASA’s Hubble and Spitzer space telescopes broke new ground with the discovery of hot Jupiter-sized exoplanets, the JWST will open up a whole new avenue for exploring small, rocky worlds that were once undetectable since Earth’s time.”

An atmosphere that remains hazy but full of hope

Of all the telescopes in operation, only Webb can characterize the atmospheres of Earth-sized exoplanets. The team attempted to estimate what is in the planet’s atmosphere by analyzing its transmission spectrum. 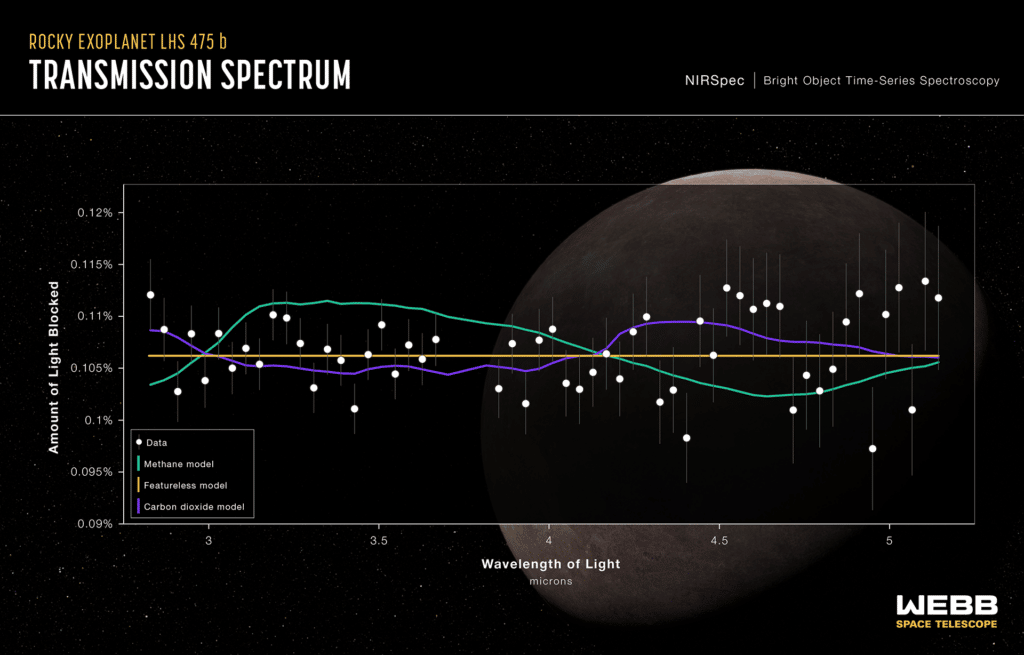 Infrared spectrum of exoplanet LHS 475 b, August 31, 2022. No detectable amounts of any element or molecule have been found. The data (white dots) are consistent with a featureless spectrum representing a planet with no atmosphere (yellow line). The purple line represents a pure carbon dioxide atmosphere and is indistinguishable from a flat line at the current level of accuracy. The green line is a pure methane atmosphere, which is not preferred because, if methane were present, it would be expected to block more starlight by 3.3 microns. © NASA, ESA, CSA, Leah Hustak (STScI)

Indeed, NIRSpec is designed to observe celestial objects close to us, such as exoplanets. The atmospheres of these worlds absorb some of the infrared light emitted by their parent star as they pass around it. A transmission spectrum is then created by comparing starlight filtered through the planet’s atmosphere with unfiltered starlight detected when the planet is close to the star.

Specifically, by collecting light from a star and separating it into a spectrum, NIRspec allows astronomers to look for minute amounts of light that are missing—absorbed by the planet’s atmosphere—at specific wavelengths. They can then identify chemicals in the planet’s atmosphere and extract other physical information.

Despite being much closer to its star than the Earth is to the Sun, the researchers predict that the planet could have retained an atmosphere given that the star’s temperature is less than half that of the Sun.

However, although the data shows it to be an Earth-sized planet (several hundred degrees warmer), researchers have not yet been able to confirm the existence of an effective atmosphere. Erin May, also of the Johns Hopkins University Applied Physics Laboratory, explains: “The telescope is so sensitive that it can easily detect a range of molecules, but we can’t yet make definitive conclusions about the Earth’s atmosphere. planets.”

The team also notes that while the planet may not have an atmosphere, some atmospheric compositions are not ruled out, such as an atmosphere of pure carbon dioxide. Lustig-Jaeger of APL at Johns Hopkins University and one of the leaders of the study says: “Oddly enough, an atmosphere containing 100% carbon dioxide is so dense that it becomes very difficult to detect.

The team needs even more precise measurements to distinguish an atmosphere of pure carbon dioxide from no atmosphere at all. Next summer, the researchers should get additional spectra at the third observation.

Also, as mentioned earlier, the planet is several hundred degrees warmer than Earth. In fact, scientists suggest that observing it during a secondary eclipse – when the planet is just beginning to orbit its star – will allow them to determine if the planet has clouds. This element can help determine whether the planet’s atmosphere is comparable to that of Venus – cloudy and rich in carbon dioxide.

Lustig-Jaeger is enthusiastic about the future of research: “We are at the forefront of the study of small rocky exoplanets. We’ve just started scratching the surface of what their atmosphere might look like.”

The researchers’ findings show the possibility of detecting Earth-sized planets orbiting red dwarfs. Stevenson concludes: “The confirmation of this rocky planet highlights the accuracy of the mission instruments. And this is just the first of many future discoveries.”