“We recommend that you activate your disaster recovery plan. The succession of tweets sent by Octave Klaba to keep his clients informed of the development of the situation during this hot night mentioned this recommendation. Many corporate clients wake up this morning to the unpleasant surprise of seeing all or part of their online services shut down.

In the middle of the night, a fire, the cause of which is currently unknown, developed in the SGB2 data center of OVHcloud, located in an industrial zone in the city of Strasbourg (Alsace), on the border with Germany. . “Thanks to a strong mobilization of firefighters, the disaster on the site was contained,” announced the prefecture in a press release, shortly before 7 am. On the platform http://travaux.ovh.net/, the first incident concerning the site was noted last night at 12:42 am.

The first incident detected on the Strasbourg site is notified at 00:42.

“Everyone is safe and sound. The fire destroyed SBG2. Part of SBG1 is destroyed. Firefighters are currently protecting SBG3. No impact on SBG4, ”tweeted Octave Klaba, the founder of OVHcloud, pointing to the different parts of the site. “All of our customers on this data center are likely to be impacted,” the company said on Twitter, before announcing early in the morning that SBG1, SBG3 and SBG4 would not restart today. Electricity has been cut throughout the site, and no ETA has been communicated yet. OVHcloud data centers have been present in Strasbourg since 2012. The four data centers are intended to house 100,000 computer servers.

A disaster recovery plan? A PRA? What for ?

Clearly, the entire hosting infrastructure of the Strasbourg site is at a standstill. So, a disaster recovery plan? Yes, provided you have one, plan! And a solid! Understand redundancy at two geographically separate sites, which is not within the reach of all CIOs.

The bill ? “It’s necessarily twice as much in terms of equipment, but the question that kills is” is the secondary infrastructure still active? ” Because it can be dormant, and there it takes time to start it in the event of a crash on the first site, ”explained Leonard Keat, consulting manager for Lexsi, some time ago at . He specified: “true high availability is the two active infrastructures and load balancing”.

The proof with two examples of morning lamentation that multisite redundancy is not within everyone’s reach:

“Our site is currently unreachable following a serious incident at our host. Our teams are mobilized to restore service as quickly as possible ”, mentioned this morning data.gouv.fr.

“The OVH SBG2 accommodation center in Strasbourg suffered a major fire. We have two servers in this center and hope that they were not affected … The main server is in SBG4 but the whole SBG sector has been shut down for the moment … “, mentions for its part the meteorological information site Meteociel, whose service is inaccessible. “So the site may not be available for a little while. And even more for SBG2 servers. We are waiting to see when the SBG4 servers can be restarted, if it is too long, we will see to put a temporary page on another functional server. SBG2’s servers are a priori lost. “

Beyond the smoke, the smell of burning plastic, and the crying of customers (but also encouragement to the bruised host), it is customer websites that are affected, Exchange servers, and OVH mail servers.

No toxic pollution was detected on the industrial site

Around a hundred firefighters were mobilized to fight the flames in this four-storey building, near a Seveso site, in the Port du Rhin district. By their nature, data centers are very dense installations, which makes it easier for fires to spread. Their priority was therefore to prevent the spread of fire to other buildings. Operational means have also been deployed by the German authorities. 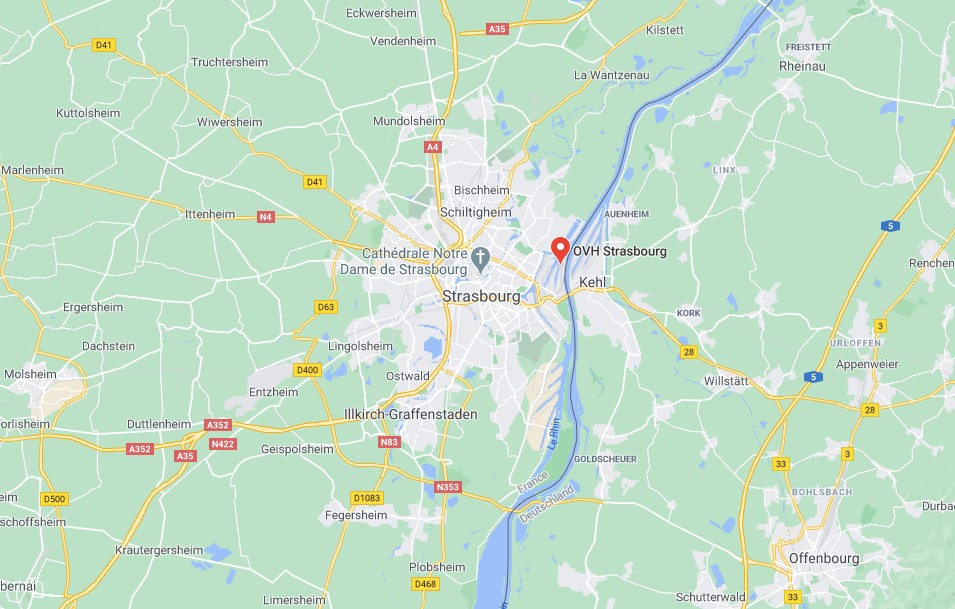 The affected site is near the German border.

The prefecture said that no victims had been identified in the fire. The prefecture also indicates that despite the large plume of smoke, no toxic pollution was detected on the industrial site.

This fire comes just as OVHcloud – which operates 32 data centers around the world – is considering an upcoming IPO. The founder Octave Klaba and the board of directors of OVHcloud “have made the decision to prepare for a possible IPO”, the company confirmed on March 8. “This operation, if it were to materialize, would allow the group to accelerate its investments and increase its visibility and attractiveness, in order to offer an open, reversible and transparent cloud,” she added. “Whatever” the final decision, whether or not a stock market launch, “Octave Klaba and his family will remain in the majority” in the capital of the company, she specified.

OVHcloud was created in 1999 under the name OVH by Octave Klaba, a young Frenchman of Polish origin who arrived in France as a teenager. The company began by hosting websites, before moving into cloud computing services. Its last published turnover dates from 2019 (600 million euros). Its valuation is estimated at more than one billion euros.