Even before Android 13 arrives, Google is rolling out improvements to Google Workspace for “Android’s biggest screens.”

Android tablet choices are limited, but some, like Lenovo’s Yoga Tab and Samsung’s Galaxy Tab S8 Ultra, can compete with Apple’s iPad Pro.

Google could turn the tide on its Android tablet shortage in 2022 after phasing out the Pixel Slate in 2019. The latest improvements come through Android 12L – the version of Android 12 for tablets and foldable devices – and the upcoming Android 13, which is currently in beta. . In May, Google announced that it was making a Pixel tablet, but it probably won’t hit the market until 2023.

Workspace enhancements are for Google Drive, Docs, Sheets, Slides and Keep, which makes sense on “widescreen” Android devices. Drag-and-drop functionality is now easier to use, along with support for keyboard shortcuts and side-by-side view of Drive windows.

“Earlier this year, Android introduced 12L, a software update designed to make it easier to use large-screen devices like tablets. During the I/O conference, we announced our intention to upgrade over 20 “Google apps on tablets to take full advantage of the extra space,” recalls Scott Blanksteen, Senior Director of Android Product Management.

As such, Android tablet users can now use the drag-and-drop feature to multitask between Docs, Sheets, and Drive. Users can drag text or images from Chrome or Sheets into an existing Docs document or spreadsheet cell in Sheets, and vice versa.

Drive on Android tablets also now has a side-by-side view to see two Drive windows. The second instance allows users to view the contents of folders before opening them. 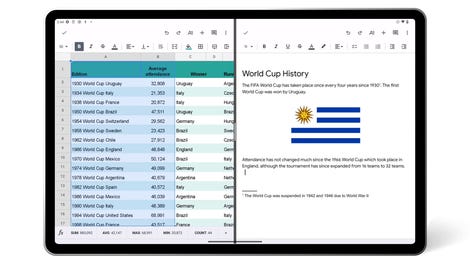 To view Drive windows side by side, select the three-dot menu in any Drive file, select the option Open in new window > navigate through each Drive window independently. Updates will roll out in the coming weeks for Workspace and users with a personal Google account, Google said.

Android 13 takes over the improvements made to Android 12L tablets.

Android 13 carries over the improvements made in Android 12L for tablets. Note the appearance of notifications, quick settings, a lock screen, previews and an improved home screen for tablets. The 12L taskbar also allows you to view split screen by dragging an app from the app library onto the screen.

Pen improvements in Android 13 aim to reduce the number of unintentional actions caused by users placing their hand on the screen.

As for the competition, the iPad has had a split screen for a while now. But iPadOS 16, which is currently in beta, introduces a Stage Manager that supports four different apps in resizable windows (instead of preset windows or equally sized windows).

In January, Google posted jobs to improve “Android tablet apps,” where the web giant said it believes the world is moving towards more powerful and capable tablets.