At the head of Animoca Brands, whose portfolio includes 380 companies in the Web3 ecosystem, Yat Siu is a symbol of the sector, keeping up with the enigmatic Satoshi Nakamoto and Vitalik Buterin.

You should have seen him during his visit to Gitex in Dubai, pushing his way through the crowd that came to greet him to see just how much Yat Siu is one of the most famous figures in Web3 today. With patience, he answers all requests, here a young Frenchman who came to give him the “next Instagram”, there an American entrepreneur who decided to praise the virtues of the next revolutionary blockchain. Yat Siu listens to them all, attentively, then gives his business card representing his avatar in the voxel, this three-dimensional pixel, always with the same courtesy: “Write me at this address, I will remember you,” he assures each of his interlocutors. 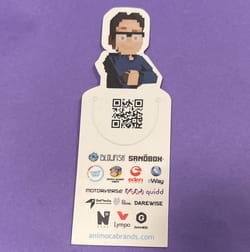 In a sector where bouncers are often king, like Do Kwon (creator of Terra), Su Zhu (co-founder of 3AC), or even SBF, he maintains a low profile, dressed in a simple zip-up sweatshirt, black T-shirt and chinos. . “It’s almost a uniform,” laughs Benjamin Charbit, director of the French video game studio Darewise. “When I met Yat, I was really struck by this level of humility, when Web3 is not famous for it: this is an industry full of “crypto-bro”: guys who figured everything out, made a lot of money, drive their Lamborghini and I will explain to you that you late. Conversely, Yat is very simple. And, above all, humble.

His notoriety, perhaps comparable to that of Vitalik Buterin (the creator of Ethereum), who will soon be fifty years old, he owes to the current important location of his company AnimocaBrands, founded in Hong Kong in 2014. Then Simple Mobile Video Game publisher, licensed by Garfield or Astroboy, Animoca grew when it merged with Australian mining group Black Fire Minerals that same year. An amazing operation on paper, but justified, according to the founder, by “ordinary shareholders wishing to become a publicly traded Black Fire company in Australia.” The group quickly launched a blockchain ecosystem and invested in startups such as DapperLabs and Pixowl, the studios responsible respectively for Cryptokitties and The Sandbox, or the OpenSea NFT platform, companies whose common goal was to develop the NFT concept.

“Animoca invested in the midst of the crypto ice age”

“At the end of 2017, which seems like an eternity, we entered the industry not because of Bitcoin, unlike many of our colleagues, but because of the NFT. We immediately thought that the concept of digital ownership would be key. a real big revolution,” Yat Siu explains about these winning bets today, but it’s surprising at a time when the ecosystem has been plagued by bitcoin price volatility. “Perhaps someone remembers that in 2018 and 2019, Bitcoin and Ethereum were worth $3,000 and $100, respectively. It was really hard, but those were the times when the best businesses were built. More precisely, this ice age that emerged from OpenSea, Axie Infinity. , Wax, DapperLabs, Decentraland and which we saw an opportunity to invest in.”

For the entrepreneur, Web3 represents “a paradigm shift with the ability to own our data and control the value derived from it. In the physical world we fight for gas, for land, but in the digital world we fight for data. In his viewfinder, Facebook, Apple and Google are guilty of “hoarding them to monetize them. More than half of the revenue generated in the gaming industry comes from Facebook, Apple and Google. What part goes to the industry itself.” Almost zero problem. Despite on the huge value created, GAFAM is not reinvested in the industry. This is the most telling example of value extraction.”

Screenshot of Gucci land on the Sandbox platform. © Sandbox

The speech ignores technical considerations, does not overemphasize, and prefers brevity. The sermon spread to four corners of the world: that day in Dubai, the day before in Hawaii, a week later in San Francisco and most often on the Internet, as for Pava, the appointment of his “long friend”, Loïc Le Mer. , met “at the World Economic Forum in Davos 20 years ago.” The requests are innumerable, but the supposed priesthood is a necessary evil for the evangelization of the greatest number beyond the single public of believers. The method works. “He’s visionary, gifted with eloquence and approachable,” Sebastian Borge, founder of The Sandbox, bought by AnimocaBrands, tells us. “He has become the flagship spokesman for a counterbalance and another measure that resonates with the public,” the Frenchman continues, pointing to “an additional context: the geographic location of Animoca Brands, based in Hong Kong, under Chinese control. “

“Meta aims for a monopoly, but thanks to Web3, this is impossible”

However, Yat Siu was born in Austria and grew up in Vienna, so he was under strong European influence. This philosophy enthusiast, who learned to code on the first Texas Instruments computers and then the Atari ST, recalls the French Revolution as “one of the origins of the libertarian system that is the blockchain.” According to him, the first seeds sprouted “at that moment: in the people who thought about the right of property, freedom, decentralization of power.” In his eyes, blockchain is not a technical solution, but a political, economic and social system capable of providing transparency and ownership for all. “That’s why there is such a backlash against blockchain in some parts of the globe, not because of the technology, but because of its political implications,” he continues, not without emphasizing the anti-Met model. “Decentralization of ownership helps distribute value more evenly. The meta is aiming for a monopoly, but that’s impossible: thanks to Web3, there will be thousands of metaverses. We cannot be content with New York alone. New York is special because there are many other cities in the world. If he was the only one, it would be boring. The metaverse works the same way.”

Today Animoca portfolio has more than 380 Web3 ecosystem companies: video games, blockchain infrastructure, wallets, esports, nft collection, trading platforms… The Hong Kong group is everywhere, paradoxical at first glance hegemony from its founder’s speech. His relatives, on the contrary, evoke a benevolent strategy. “It would be problematic if there was a concept of control, but Animoca funds the ecosystem and participates in it in a minority. Animoca still refuses to play an interventional role in box management,” explains Benjamin Charbit, whose company is also acquired by the Hong Kong group.

Screenshot from the game Darewise “Life Beyond”. © Darweiss

“There is a way to make Animoca a real search for cultural compatibility. With 380 companies in their portfolio, you would think that they would invest anywhere, but this is not at all the case,” says Sebastian Borge. “The strength is in the ecosystem, and Animoca does not centralize the ecosystem, but increases it tenfold. Animoca does not intervene promptly in the management of the company. They support us through the fundraising phases or the decisions we have to make at the board level, but will never try to consolidate resources or achieve economies of scale. The main stakeholder listens to criticisms of the omnipresence of his group without being especially offended. “We don’t have debts, we didn’t use these mechanisms to finance ourselves. Most people think of us as venture capitalists because we make investments, but we are not a fund, which means we can invest very long term. horizon. We do not need to take out our capital,” he replies.

The expansion of the group, valued at almost six billion dollars, should not stop there. Thus, Yat Siu calls for “3.5 billion players in the world” to conquer as well … the educational sector. “Teachers are some of the biggest content creators in the world and are generally very poorly paid. Web3 can change that.” A vision that quickly took shape: In early November, six teachers shared $230,000 through the sale of NFTs related to their content on Animoca’s platform, TinyTap.