Since Their launch in 2019, the Apple AirPods 2 and Sony WF-1000XM3 are often discounted, so seeing them at discounted prices has become the norm for several weeks. They can be found for example at 124.99 and 156 € at the moment. Note that the many rumors and leaks in recent weeks leave little room for doubt as to the imminent arrival of new Sony and Apple headphones, which could partly explain these price cuts.

Apple’s AirPods have been a smash hit since their launch in 2016, but now they face much stiffer competition from other Bluetooth headphones, like Sony’s WF-1000XM3. Released at € 249, the latter cost € 70 more than the AirPods which started at € 179 with the standard charging case and € 229 with the wireless charging case. Today we sometimes find them the Apple AirPods 2 with the wired charging case less than 130 € and the Sony WF-1000XM3 less than 160 € on discount.

Price changes that do not change the intrinsic qualities of these products. Sony still offers more features than AirPods, including active noise reduction and better audio quality. To find out if Sony’s are really worth a higher investment, we compared the two models.

The fit and look

The differences between these headphones start the moment you take them out of their case. They have completely different designs. The AirPods adopt a classic format while the Sony are in the in-ear format, and therefore enter the ear canal. These come with different sized end caps that allow you to find the most comfortable and airtight fit. Sony even recommends using different sizes for each ear if necessary because the ear canals are not always perfectly symmetrical.

We’ve found AirPods to be much lighter and more comfortable to wear all day, but a lot of that depends on the shape of your ear. Sony headphones are bulkier but they offer better fit in the ears (and better passive isolation). We didn’t have any stability issues when jogging, but we felt the Sonys were much heavier in the long run.

Keep in mind that none of these wireless headphones are water resistant, so they are not recommended for sports. Sweating tends to damage the ear cups over time, at your own risk so if you use them for sports anyway. That being said, AirPods survived our unofficial test where we sprayed, soaked, and washed them.

When it comes to color options, AirPods are only available in glossy white. Sony’s are offered in matte black with copper highlights or taupe with gold highlights, both with matching housings. Apple’s charging case is compact and easy to slip into a pocket without creating too much bulk. The Sony case is twice the size and less easy to put in a pocket, but its metal cover and matte finish make it look more upscale.

Sony wins for audio quality, but sound for calls is not as clear

AirPods have always been okay when it comes to sound quality, but they’re far from the best in their class. Once you’ve listened to Sony’s, it’s hard to go back. The sound is incredibly clear, with well-defined mids and bass. There is also an equalizer (available in the Sony Headphones Connect app on Android and iOS) to adjust the sound profile. The app can also automatically determine your surroundings and adjust the sound profile accordingly.

The other big advantage of Sony headphones over Apple’s is the active noise reduction. We found it to perform almost as well as some over-ear headphones. And if you don’t want to be completely immersed in your music, Sony can also amplify outside noise or accentuate voices during calls. You can set this manually through the app or let it do it automatically depending on the conditions.

On the other hand, when it comes to call quality, the results are not as satisfactory. The WF-1000XM3 will obviously sound better to the person wearing them, but the other party will hear you better with AirPods. With these, the microphones are closer to the mouth and better isolate the voice. Sony picks up more ambient noise.

Both models have customizable touch controls that let you control the music without going through the phone. Sony can be set from the app on Android or iOS, while AirPods can only be personalized from settings on an iOS device. Android users will therefore not be able to change the touch controls of AirPods. 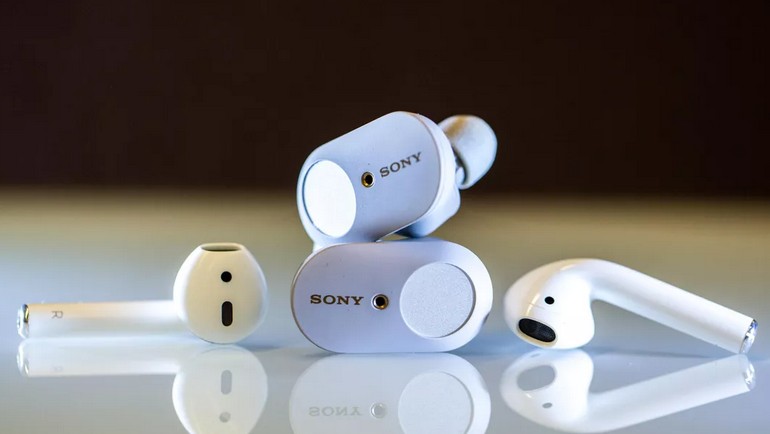 It is possible to start playback, pause, skip to the next or previous track, but unfortunately neither of them allows you to control the volume. To do this, you have to take out your phone or ask your voice assistant. A simple “Hey Siri” will do the trick for AirPods, while Sonys require you to press and hold the touchpad to activate the Google Assistant.

Both models detect when the headset is removed and stop playback. Sony’s touchscreen interface is a bit too sensitive, so it’s easy to accidentally rub it while adjusting the headphones.

Sony has integrated NFC technology into the case to simplify connection with an Android phone. AirPods connect automatically when you open the case next to an iOS device. You can also pair AirPods with Android smartphone and Sony with iOS device manually through their respective Bluetooth settings.

Both models are Bluetooth 5 compatible. Overall, we didn’t experience any significant connectivity issues on either, but we found the AirPods to be a bit better at maintaining a solid connection with them. iOS.

Winner : Ex aequo. Both offer a solid Bluetooth connection and customizable touch controls. If you want hands-free voice commands, AirPods might be the best choice, but Android users will appreciate being able to adjust the Sony’s controls.

While Sony headphones offer the longest battery life (six hours of listening versus five hours on AirPods), both give you the same number of charges through the case, for a total of 24 hours depending on the two brands. . But it should be noted that Sony’s six hours are given with noise reduction activated. If the latter is turned off, you will have almost eight hours of listening time. Both models also have a fast charge function: 15 minutes for three hours of listening on AirPods and 10 minutes for 1.5 hours on WF-1000XM3.

The Sony WF-1000XM3 are undoubtedly the big winners. Their audio quality is fantastic and their noise reduction particularly effective, impressive even for headphones. But AirPods have a few advantages too, notably their less invasive (some don’t support in-ear) and less bulky design. They are indeed smaller, lighter, more comfortable to wear and the case is more compact, so that it fits easily in a pocket. However, if the in-ear format does not bother you and you have the necessary budget, we strongly advise you to go for the Sony, which is much more advanced than the AirPods in terms of features and audio quality.

article adapted by the team