Equipped with the new M1 processor and a 5G connection, has the new iPad Pro just made the leap to the supercomputer we are longing for? Or is it just another, prettier version of theiPad Pro 2020 ?

In terms of hardware, yes, this is a leap forward. The iPad Pro has a new processor as well as a mini LED display for the 12.9-inch model which we found to be as good as the OLED in our daily use. We also like the arrival of a 5G connection and the new front camera that tracks the subject during video calls. Only here, this iPad still works with the same operating system, and largely with the same applications, as all the other iPads.

We’ve been using the new iPad Pro in 11 and 12.9 inches for a week. To save time for those who wonder about the opportunity to crack, we can say that 899 euros for the basic model (and approximately 1500 euros if you add accessories and storage space), you are left with luxury equipment that most people probably don’t need compared to their phone or laptop.

However, if Apple ends up updating

iPadOS to add new features, multitasking, support for external monitors, more business apps, and maybe even some kind of Mac compatibility mode using the M1 chip, the iPad Pro could become an amazing machine. . As it stands, it is still an impressive luxury tablet just waiting to beef up its software part to take it to the next level.

The first thing we did was put the iPad Pro M1 through the test beds. Our test copy is a high-end version with 16GB of RAM and 1TB of storage while the entry-level iPad Pro models only have 8GB of RAM and 128GB of storage.

The performance gains in single-core computing aren’t that dramatic, but in multi-core tests it leaps well above the iPad Pro 2020, or theiPhone 12 or any other tablet you can think of. In Geekbench 5 and 3DMark Wildlife Extreme, it’s clear that the processor of the iPad Pro M1 (with an eight-core CPU and an eight-core GPU) is basically the same as that of other Mac M1s.

Browsing and launching apps is lightning fast. But it is difficult to say how far this power goes. On a Mac, you can open loads of tabs on Safari and easily see how the M1 does it all without flinching. 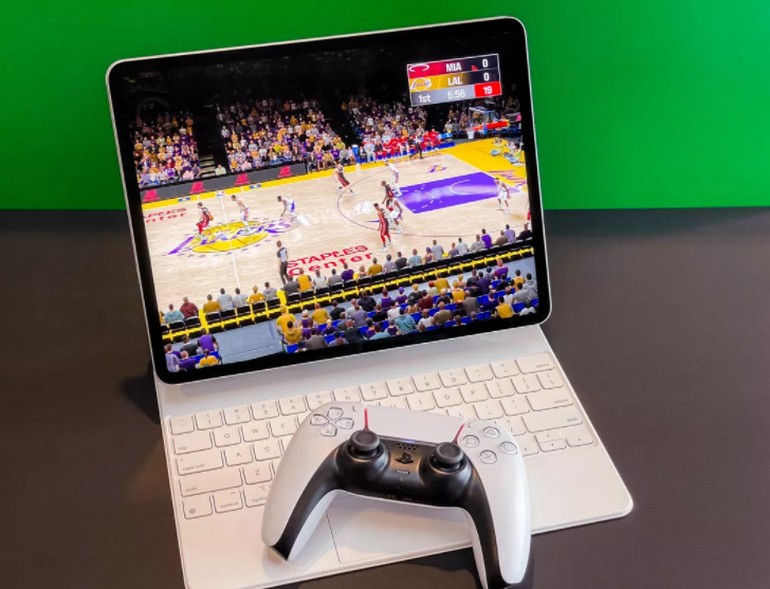 We launched a few 3D scanning apps on the iPad Pro, using lidar and cameras to create 3D models of a porch and playground in a garden and then rendering them with augmented reality. Processing very large models with a million polygons still took about a minute, but the iPad Pro didn’t seem to heat up or toil as much as the 2020 model. Augmented reality is one of Apple’s strategic focuses for the future, and this iPad Pro is now the brand’s most powerful device to carry this use.

A day of autonomy

Apple promises a day’s battery life and it is clear that once again the iPad Pro does not disappoint. The versatile autonomy of this 2021 model is around 13 hours. Promise kept therefore. But if the endurance of the iPad Pro 2021 is comfortable, it is necessary to show a great patience to take advantage of the capacity of its battery again since its 20W charger will require 3 hours to power it. 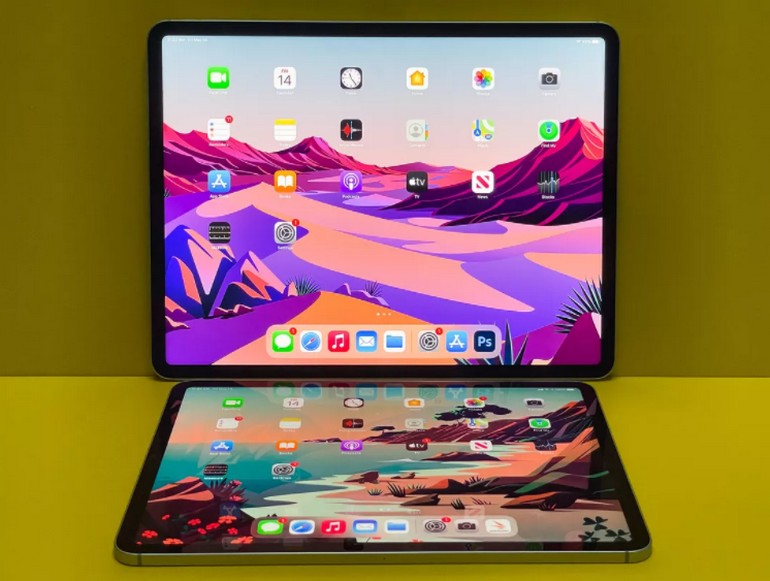 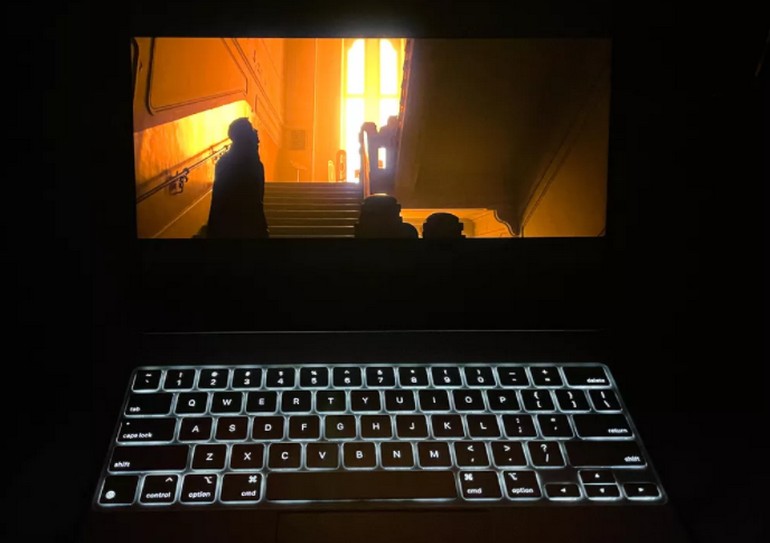 Compared to that of the 11-inch iPad Pro, which has the same Liquid Retina LCD display as the previous iPad Pros, it is significantly better.

The iPad Pro sports a 12-megapixel wide-angle webcam with which you can take videos or photos while holding the tablet at arm’s length, as if using it with a tripod or a selfie stick. It is combined with the Frame Center feature which digital zooms and pans to follow the other party’s face as they move during a video call. It already works with FaceTime and Zoom, and Apple promises support for major video conferencing apps. We tested a few Zoom meetings with the Centered Frame feature and it was generally successful.

But there is a flaw: the webcam is still located on the “upper” edge, and seems positioned for calls in portrait mode. However, we personally use our iPad with a keyboard case, like a laptop. Suddenly, the position of the webcam is not ideal because it gives the impression that we are not looking at the screen. 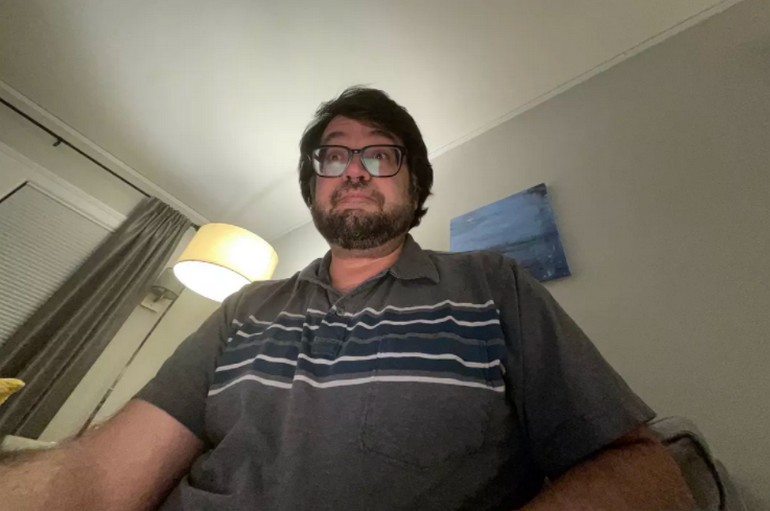 You have to pay 1,069 euros, stupid 170 euros more, for the 11-inch iPad Pro with 5G connectivity, to which we must add a specific package. It is a bit expensive for a function that we will only use occasionally. Personally, we use the access point function of our smartphone when we do not have Wi-Fi.

The advantages of the iPad Pro over theiPad Air are many. It has a smoother 120Hz display, faster M1 processor, digital zoom front camera, Face ID, lidar and multiple rear photo sensors, better speakers and microphones. , optional 5G and faster Thunderbolt connectivity. It also offers more generous storage options. And there is also this terrific Mini LED display on the 12.9 inch version.

Thunderbolt is a theoretical bonus that allows faster peripherals to be added for storage or displays, in addition to the USB-C support already present on iPad Pros (and Airs). We didn’t have a fancy monitor or large Thunderbolt docks to try out. And we’ve found that USB-C accessories, while useful, are limited by the flexibility with which iPadOS uses them compared to a Mac. 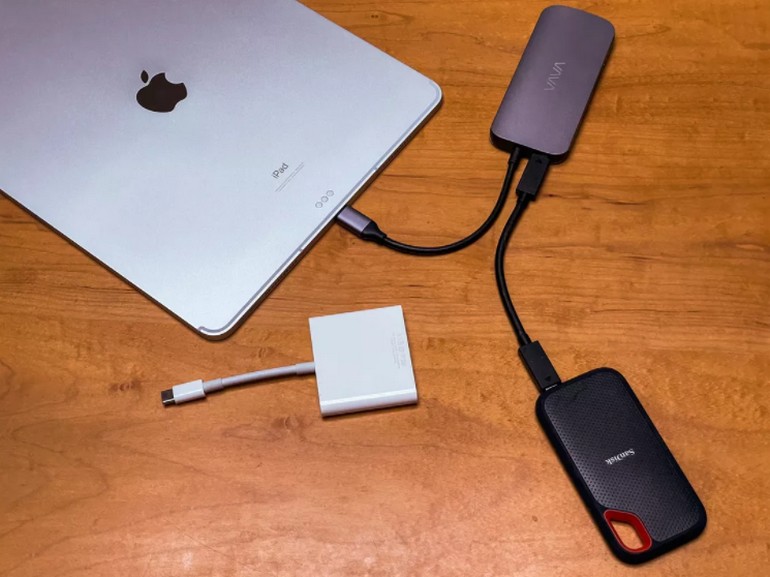 Support for screens is a good example. The iPad Pro can only use an external monitor for apps that choose to support it, which is currently limited to certain games, video editing tools … and that’s it. You can’t extend your iPad onto a second screen, or use multiple apps on different screens. Yet this is the type of use one would expect. The Apple Developer Conference (WWDC), which will take place in a few weeks, should tell us more about the next update of iPadOS. We can expect a number of developments thanks to the contribution of the M1 processor, but it is difficult to predict anything at the moment. 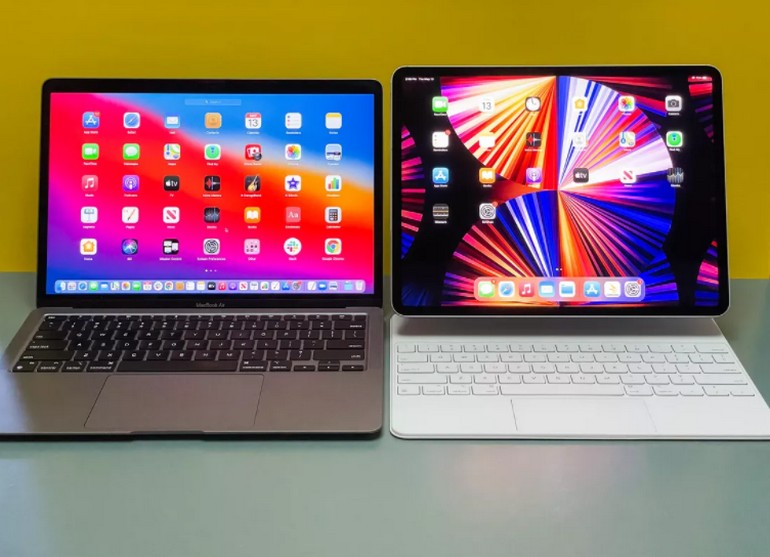 The only downside to the 12.9-inch model is that it might require specific accessories due to its slightly thicker size. We were able to use it with a Magic Keyboard last year, although Apple warns it might be a bit cramped there. But he did not enter the StudioDock station in Kensington. In contrast, the 11-inch iPad Pro adapts very well to existing cases and stations. 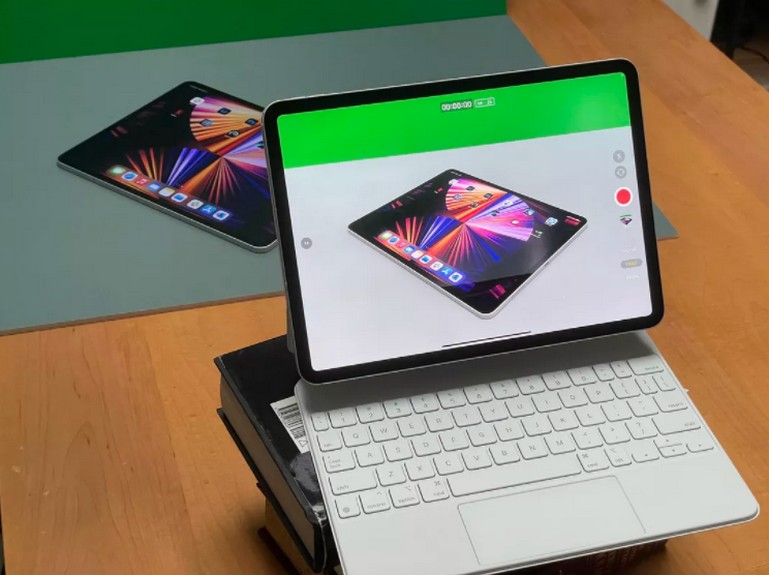 A point on the competition

The tablet market has changed little and we still find the same headliners in this price segment alongside Apple, namely Samsung and Huawei. The flagships of the two brands mentioned are therefore opposed to the iPad Pro 2021: the Galaxy Tab S7 + and the MatePad Pro 2021.

We like being able to type on the keyboard on the iPad from anywhere, and the new screen is more efficient outdoors. But that doesn’t make it a perfect replacement for a laptop. Certainly, the mouse, trackpad, and keyboard support on iPads, along with the excellent (but expensive) Magic Keyboard, provide solutions for the iPad to start looking like a futuristic Mac. But the strengths of the tablet in terms of speed and its wide range of applications remain constrained by an operating system that is still too rigid. You can’t multitask with the same flexibility as on a Mac. For example, you can’t be in a Zoom meeting and use two other apps for notes and Slack. Much is expected of the next wave of M1 processor-optimized apps that will make the most of the power of the new iPad Pro. We especially hope that it will be possible to open many more applications and tabs at the same time if future versions of iPadOS allow it.

With the 16 GB RAM / 1TB configuration of our test copy, the raw speed of the M1 processor seems equivalent to that of the MacBook Air, iMac and Mac Mini M1 currently available. We wrote this review from this 12.9-inch iPad Pro and its Magic Keyboard. Just like the previous iPad Pro, we love the keyboard and the writing experience. On the other hand, we are much less excited about how to manage other apps to prepare files and publish this article. A concrete example: our tools connected to Okta, like Outlook, are managed very differently (and with different permissions for cross-application work) on iPads compared to Macs. As a result, we had to go back to a laptop (a MacBook Air M1 in this case) to finalize.

And this is the problem with the iPad Pro: The 2021 version of the hardware is superb, polished (except for the location of the webcam), and expensive. And we do not yet know in which direction Apple will take it with its software developments.