During their back-to-school lecture, Amazon introduced a strange robot that is as cute as it is strange. Astro will understand your home, map it, move around, monitor it

Is there still an area where Amazon hasn’t yet looked for a foothold? On Tuesday, during its back-to-school conference to introduce all of these new products, the company unveiled many products, including a new Echo Show 15 smart display and most of all, an amazing home robot.

Amazon Astro will hit indoors later this year. And behind this well-known robot name, we find a three-wheeled module with a screen that tilts like a head and round eyes that will remind many of Wall-E.

A rolling screen with a unique personality

“It’s our first robot, but not our last,” we proudly proclaim from Seattle. Astro has it all. First of all, because of its appearance. It was created inspired by robots from famous movies, series and cartoons, and that gives it an immediate bonhomia with its animated face and round eyes. “We wanted to give it a unique personality,” explains Dave Limp, Director of Devices and Services. Amazon promises that you will be able to interact with the people around you and their actions in the moment.

Because Astro relies on its obviously onboard Alexa-powered AI to be helpful to you and respond to your voice commands while relying on your screen to display helpful information. On your activated screen, you can share notifications, video calls with your contacts, show video content or music.

It is topped by a periscope camera at the end of a telescopic arm that allows you to see higher and further, with an expanded field of view.

Astro will be capable of anything. This little home robot travels at almost one meter per second, it can map your home, and it will be able to detect even the smallest changes. It recognizes the faces of the inhabitants and can therefore detect an intruder or an unknown individual.

If you leave your house, Astro detects you and knows that you can go into “patrol” mode to move freely around the house and act as security guards. Amazon also offers to partner you with the Ring Protect Pro program to take proactive action around the house and report unusual activities with a notification. You will then be able to view the videos which will also be saved to your Ring account.

Alexa and all its built-in functions

Alexa allows you to offer features often found on Echo Show smart displays. It has the bonus of having a screen that tilts at the end of its pivoting “head” as a bonus. It will also be possible to profit from information, from streaming services, from you rappels calendrier, from lancer des minuteries or des appels à des proches, notamment in cas de souci, with a robot who lives in a propriétaire et le suit durant l ‘video call.

Amazon promises to evolve its robot over time with many updates to add possibilities to its robot. In particular, it will be compatible with the new Amazon Together function, a support service for the elderly or dependents that allows them to be in permanent contact with their loved ones (reserved for the United States). 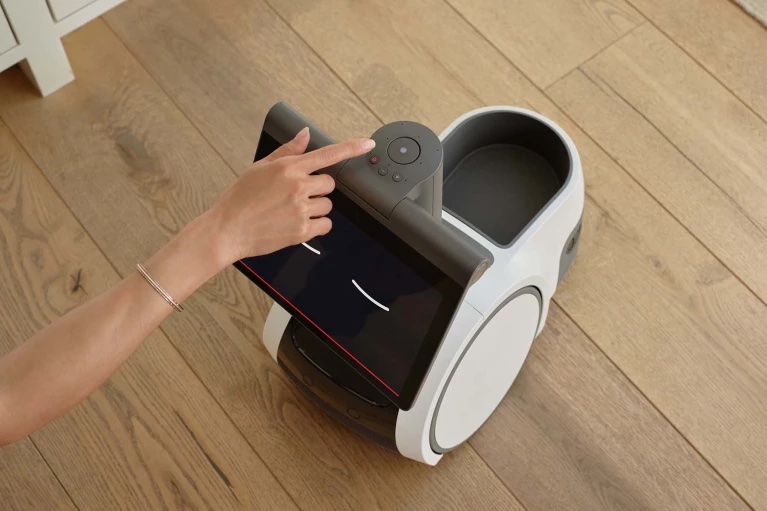 Astro can switch to do not disturb mode

Privacy has not been forgotten and it is possible to activate a “Do not disturb” mode so that Astro limits its movements according to the time of day, to define areas where you do not want it to go, or even to cut the microphones. and the camera.

Amazon Astro will sell for $ 999.99 (excluding tax) by the end of the year in the United States. However, no launch is planned for the moment in France.