“For those who dare” (for those who dare) can we read under the shell of this new iteration of the Rog Strix SCAR range, in 15 inches here, the range of ultra powerful gaming PCs from Asus. 3199 euros the laptop (sold in France with a mouse and a backpack), it will certainly be daring. At this price, Asus has stuffed its computer (reference SCAR15-G533QS-HQ146T) with just about everything that there was more efficient: 12-core processor, the AMD Ryzen 9 5900HX, one of the most powerful available, a mobile GeForce RTX 3080 with 16 GB of dedicated memory, 16 GB of RAM in GDDR6, an SSD of 1TB, a 15.6-inch screen in QHD (2560 x 1440 pixels) with a refresh rate of 165 Hz, and even support for the newest Wifi 6.

Out of the box, we quickly understand that we will also have to dare the design, very pronounced “gamer”, with its RGB that goes in all directions, in front, behind, on the keyboard. The whole thing is counterbalanced a little by an aluminum frame painted in black, quite discreet therefore, but which remains more massive than most laptops. 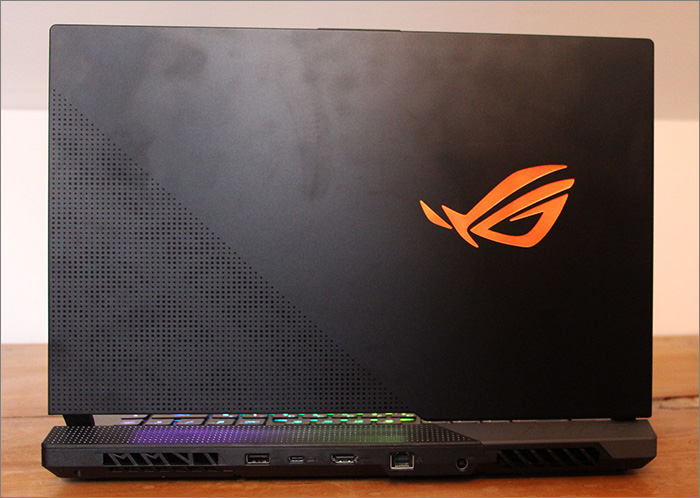 There is clearly a will to power displayed, and some will appreciate it. You also have the possibility of changing part of the frame to decorate, thanks to the Armor Caps, delivered in three colors: Translucent Black, Rubber Gray and Spangle Silver. 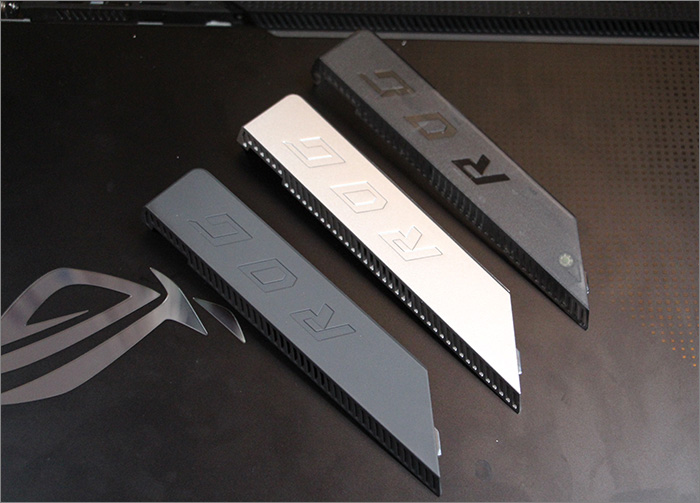 The keyboard is also suitable for use by gamers, since it is a mechanical keyboard, generally more precise and therefore preferred by gamers. It has customizable RGB lighting (with 8 different modes), as well as a multitude of utility buttons that allow you to manage the sound, the backlight level, the type of backlight you want or even the ventilation mode. You can also take a screenshot, manage the brightness, extend the display or duplicate it on another screen, enter standby or airplane mode, or activate or deactivate the numeric keypad. 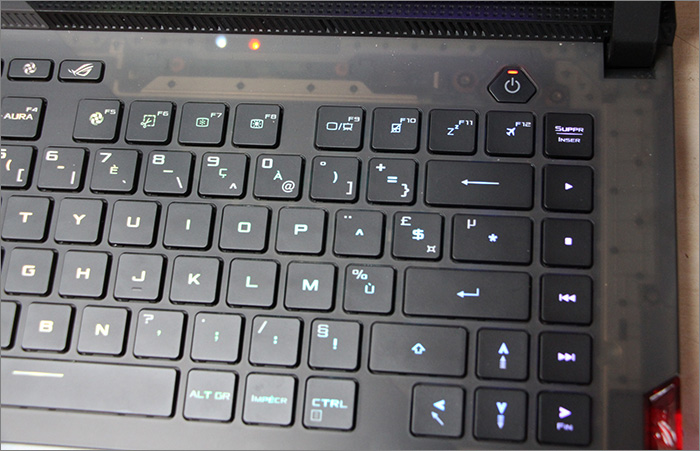 It should be noted that the keyboard does not have a numeric keypad to its right, but that it is possible to highlight one on the touchpad. This is not necessarily the most practical, but it has the merit of being there. 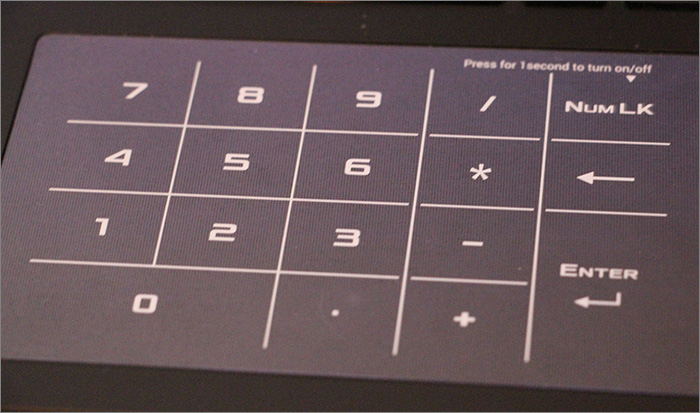 On the right, no connections, apart from a fan grid and an input for the Keystone, the USB key supplied with the computer which gives access, in particular to Armory Crate. This software supplied with the PC allows you to dive in detail into the different modes of brightness and colors, backlighting or even fan speed. The Keystone also provides access to the Shadowdrive, which offers 1TB of additional storage. 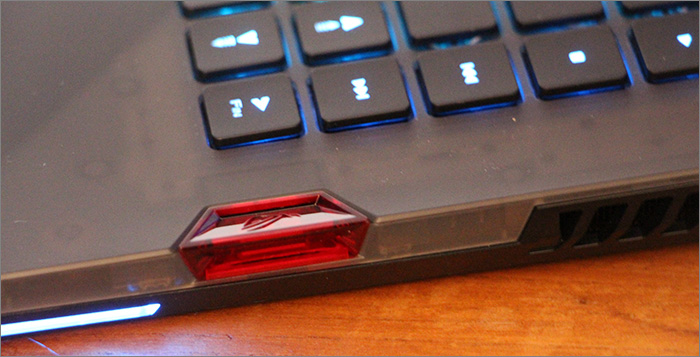 On arrival, this gives only three USB inputs. If you want to use it permanently, with a keyboard, a mouse and a headset for example, it’s a bit short, even if it’s quite classic. In addition, the choice of placing the HDMI input on the back makes the use on the go a little less practical for our taste, since each time you want to connect it to a screen, you have to go and find the socket. behind.

In addition to the partition offered by the Shadowdrive, the computer already offers 1 TB of SSD storage, bringing its capacity to 2 TB: enough to see coming! Tested via AS SSD Benchmark, the primary SSD gives a read speed of 3978 MB / s. In writing, it gets 2295.71 MB / s. For the sake of transparency, note that when resetting the PC at the end of the test, the SSD failed. Asus told us that the version tested was a “first sample” and that the problem has been identified, and the “Raid 0s used have been replaced with 2x1TB dual SSD storage” on these machines. In addition, an SSD failure, if it can happen in 1% of cases, is normally covered by the warranty. 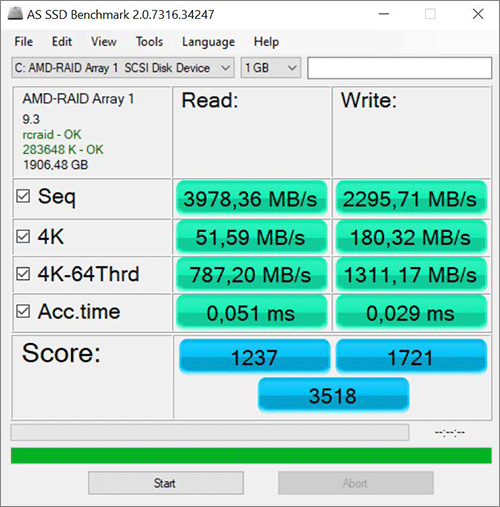 To test the battery life, we subjected this Asus Rog Strix SCAR 15 to the same test as usual: brightness at 50%, sound at 40%, connected to Wifi and Casa de Papel launched on the browser web Edge. Verdict: it lasts 4 hours 27 minutes. Asus advertises up to 12 hours of video playback on its site, perhaps with different settings it is indeed possible to achieve this. It’s not much, even for a gaming PC. If we add to this the absence of a webcam, this PC is not recommended for students who would like to use it for lessons, whether online or face-to-face.

Let’s take this opportunity to focus on sound, one of the strengths of this PC. With two 2 watt “tweeter” speakers and two 4 watt speakers equipped with Smart Amp Technology, which boosts the sound for small speakers. As a result, even below the 50% mark, we hear the sound of games or series very loud, enough to largely cover the noise of the fans. If usually, players like to play with headphones to hear the smallest details of the game, where threats come from, music, etc., players with ears tired of constantly wearing headsets can have sessions over speakers worry-free. A real good surprise! 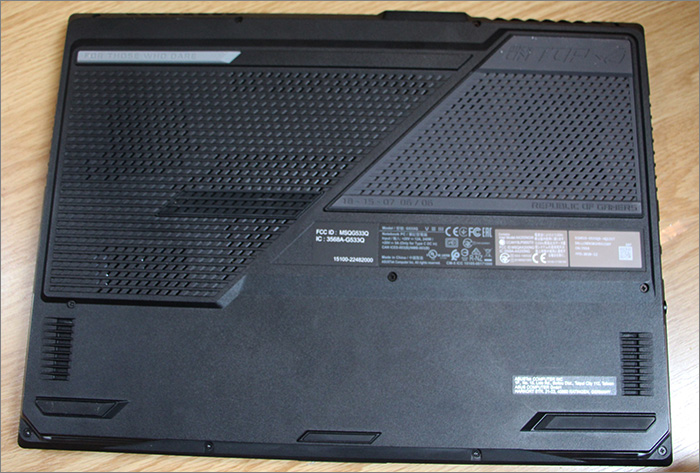 Let’s move on to the power of the beast. In benchmark Novabench gives it a score of 3096, knowing that for some reason that we do not know, the GPU is not taken into account in this Bench tool, we can therefore consider this figure as largely undervalued. On Geekbench, the single-core CPU gives 1434, in multi-core 7461 and the GPU 141155, very high scores and not surprisingly given its components.

Note that the NVidia RTX 3080 mobile, announced at CES 2021, is far from comparing with its powerful big sister dedicated to the Fixed PC. The card in this Asus displays 6,144 computing units (Cuda), nearly 2,500 less than its version for non-mobile configuration, which has 8,704. In addition, it should be noted that a quantity of memory is not only less important (16 GB approximately against 24 GB), but also slower because it is GDDR6 where the Geforce 3080 embeds GDDR6X, not to mention a 256 bit bus against 320 in the card for stationary PC.

This Rog Strix SCAR 15 has a good part of it, and even the most important ones, like the Resizable BAR, which allows the processor to access the entire frame buffer or image memory of the graphics card, which allows to increase performance. The card is also capable of mobilizing Dynamic Boost 2.0, which, using artificial intelligence, should help to better distribute the workload between the processor and the graphics card. Nvidia claims that on games like Control or Metro: Exodus, the gain would be 12%. Third feature available on this model: Whisper Mode 2.0, which, again thanks to AI, allows the fan to make less noise, without drastically lowering its speed. The only feature of the Max-Q cards that this Asus does not have is the Advanced Optimus, which allows you to switch the workload between the graphics card and the graphics processor integrated into the processor as needed.

More concretely, in play, here are the results that we obtained. On Resident Evil 2 and The Witcher 3, fairly demanding, but reasonable games, it obtains 140 and 110 Frames per second (IPS) respectively in ultra with a resolution of 1440 pixels.

As for big pieces like Red Dead Redemption 2 and Cyberpunk 2077, the Asus Rog Strix Scar carefree exceeds 30 FPS, but sometimes struggles to cross the symbolic bar of 60 FPS. In detail, you will be able to play cowboy in 1080p at 68 FPS on average, and 54 FPS in 1440p. If you are more of a punk of the future, you can hope to shoot in 1080p around 50 FPS in ultra (ray tracing pushed to the limit) and 75 FPS in medium. With a higher resolution of 1440p, it will be necessary to be satisfied with 45 IPS in ultra and 65 in medium.

Note that all the tests were carried out in Turbo fan mode, therefore the noisiest and most powerful in terms of cooling, but rather efficient: 80 ° C max measured on the graphics card, which seems reasonable compared to the tests on his sister for desktop PC. However, used without a computer rest to let the air pass underneath, we went up to 91 ° C, so it is not recommended to use this computer in game without the proper equipment to put it down.

On arrival, we therefore have a 1440-pixel PC that is very pleasant to use, which moderates its performance losses very well by always keeping a frame rate above 30 IPS on high-performance games, or even flirting with it. 60 IPS, and which often exceeds 100 IPS on games that are a little less greedy. This is a high-end machine that can run just about anything in QHD.

For more, you can opt for the MSI GE 76 Raider from MSI, which has taken the leap of 4K and offers a computer capable of going a little further than this one. Still in 15 inches, but going down a price level step, the HP Omen 15 remains very reasonable for its price.