While some mobile computers tend to abuse the term ultraportable, the Asus ZenBook 13 (UX325E) makes it immediately clear that it takes things seriously. With its small kilo just exceeded – 1140 grams – it is easily forgotten in the bottom of a bag or backpack, ideal support for working outside the office or during an unexpected trip. A direct consequence of a featherweight, this ZenBook 13 displays great finesse, again in line with its philosophy of eliminating the superfluous. Everything seems to go in the direction of a desire to attract the user’s gaze to one of the star elements of the machine, its screen.

Now adopting OLED technology, compared to the ZenBook 13 UX325 launched a year ago that was adorned with an IPS panel, the Asus ultraportable offers in this 2021 version a screen with discreet contours, in particular on the side edges (the upper frame houses a discrete 720p HD webcam). With a size of 13.3 inches in 16: 9 format and Full HD resolution captured at 1920 x 1080, the latter immediately appears as a flagship argument, both the rendering, like this even at 50% brightness, is convincing and never aggressive in terms of vivid color reproduction.

It is essential especially when it comes to blacks, of a confusing depth, a common advantage of OLED panels. Small advantage, the screen includes a blue light reduction technology validated by the certification body SGS, so as not to damage your vision if you happen to want to chain long periods of work and / or catch up on Amazon Prime, Netflix or even Disney Catalog +. Especially since the autonomy of this ZenBook 13 could well take it there.

Autonomous in the situation

Once its lithium-ion battery (67Wh) is fully charged, the Asus computer goes the distance like an energetic marathoner. After several tests based on typical usage situations, it seems like you won’t have to worry much about the presence of an outlet near you. In fact, at 60% brightness, connected via Wi-Fi, and with an open browser, this UX325E provides 9 hours of battery life while running an Amazon Prime or Netflix series. Enough to guarantee a worry-free train journey.

When consulting information on the Internet, always via Wi-Fi (even with more than ten tabs open) and using a simple word processor, it discreetly knows 12 hours. The notion of an ultraportable doesn’t really stop with weight alone, and therefore can also be applied to this ZenBook 13’s ability to be used without too many time constraints. 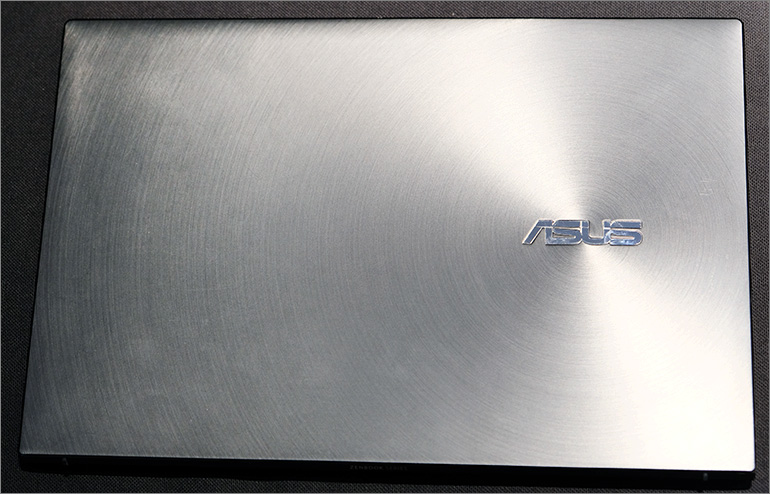 On the other hand, his nomadic side suffers from a flaw, his connection. If it is quite good in terms of transfer speed (either for charging, or for a possible connection to 4K and / or 8K monitors) through its two Thunderbolt 4 ports; As well as on the side of the usual range of HDMI, USB 3.2 and microSD card readers, the Asus laptop is limited in terms of sound. There is no connector available, forcing you to go through the supplied adapter, which can easily get lost, or use headphone / Bluetooth / USB headphone. 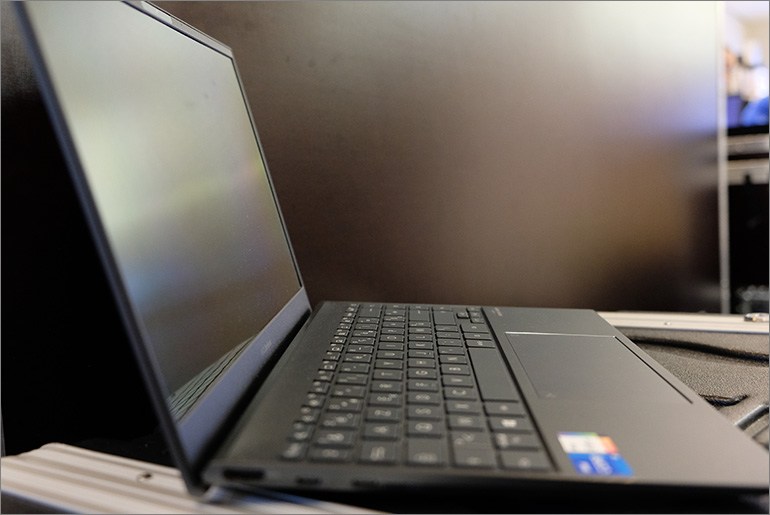 Nothing serious in itself, but it is always a shame not to have that alternative. Lovers of radiant sound will be able to take advantage of the built-in speakers labeled harman / kardon, which deliver sound sometimes lacking in nuance, but of more than honest quality in the context of a notebook. On the other hand, you have to look down a bit to discover the other successful element of this ZenBook.

In a touch of a pad

The quality of a keyboard, or at least how it feels, is critical to the comfort of using a PC in general and a laptop in particular. This element is often still the black point of many models. Fortunately, it is not the case with the ZenBook 13 that has a pleasant touch, with a real flexibility in the return of the keys, embellished with a reassuring click, far from the raw appearance of certain cobblestones. Even after writing text for hours. 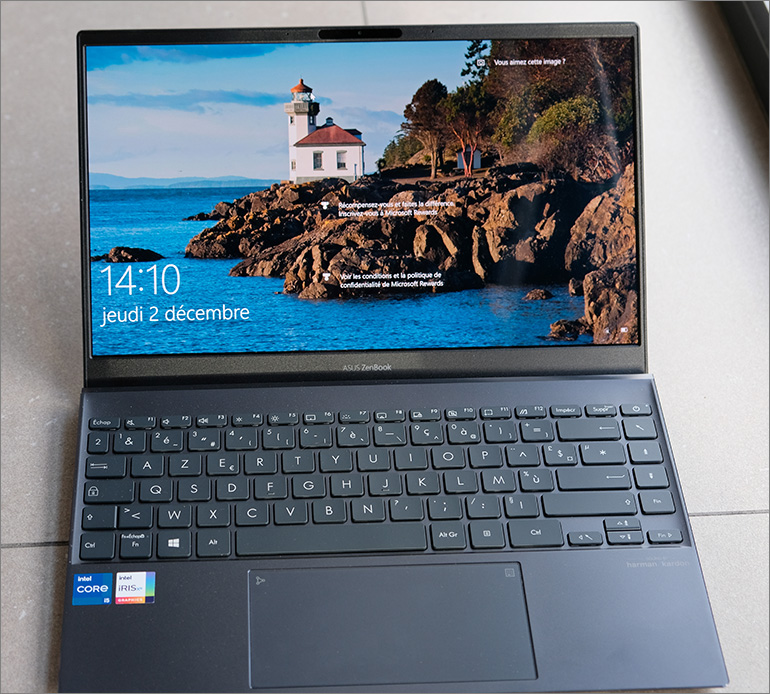 In support of this qualitative keyboard, the Asus notebook also incorporates a most convincing touchpad, avoiding the pitfalls of many similar ones. Large in size, it responds perfectly to requests and rarely fails to recognize rapid movements. Its little extra is to offer a discreet icon in its upper right corner that, with firm pressure, allows a numeric keypad to be displayed on said touchpad, thanks to the presence of LEDs. Far from being a gadget, this feature bypasses a physical lock that would overload the PC or the tedious – and archaic – “uppercase + numbers” method. Enough to save time and provide even more user comfort, Asus’ leitmotif on this ZenBook. 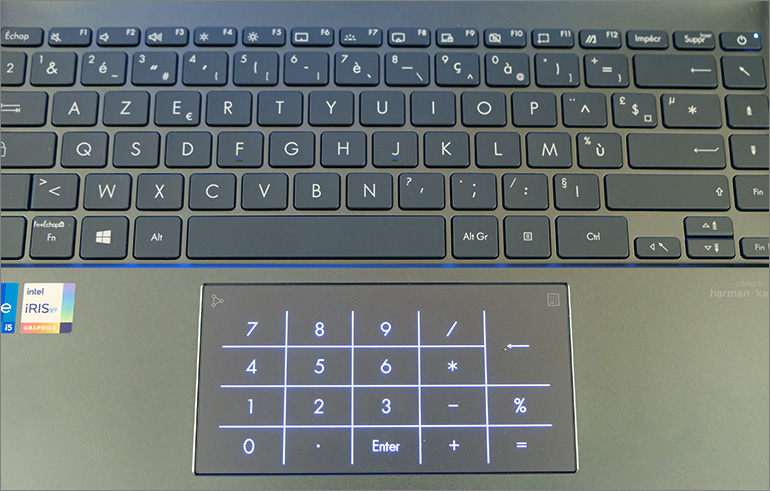 Indeed, and perhaps needless to mention, Asus clearly positions its product on office automation and not gaming, even if it is possible to indulge in some low-power titles, of course. So it excels in its chosen field and is fast, while managing to evacuate heat quite convincingly in most cases. On the other hand, it tends to blow a little hard and fast, without creating significant noise disturbances either. 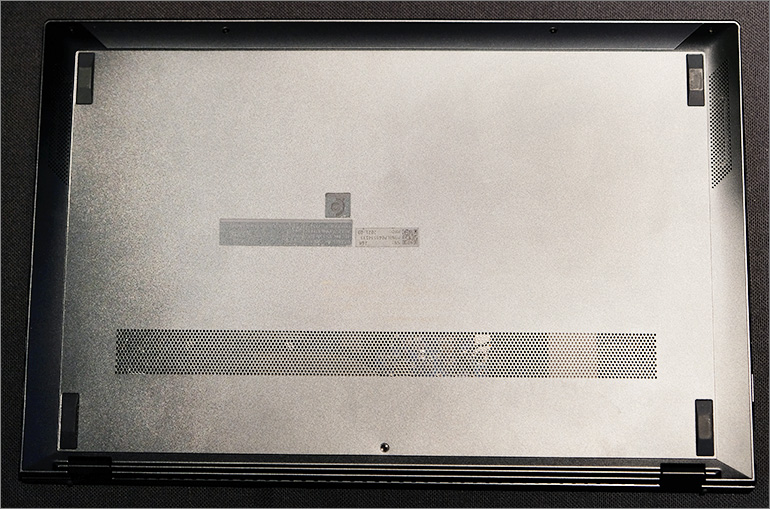 Offered between € 999.99 and € 1199.99 depending on the model (i7-1165G7 processor clocked at 2.8 GHz and 1TB SSD hard drive for the latter), the ZenBook 13 is a solid product, in every way of the word. Because if it is not insensitive to shocks, of course, its high level of finish and the brushed finish of its “pine gray” coating give it a robust appearance, far from the plastic impression of certain models.

At the level of the competition, although they remain in approximately similar sizes and prices, we can mention the Surface Laptop 4 that had obtained good results during our test in its previous version. If you are looking for a slightly larger screen, the Asus Zenbook UX425EA can be a good alternative even if you lose the Oled screen to an IPS.

Already charming in appearance, this Asus ZenBook 13 (UX325E) doesn’t lie about its intentions once in hand. Particularly practical to transport thanks to its weight and delicacy, it becomes a companion for work, but also on the road, with impeccable reliability with its autonomy among the most convincing on the market.

Equipped with a beautiful OLED screen with dense blacks and a sound system that is, without being ideal, effective, the ZenBook simply fishes for its hijacking of a jack and its tendency to blow a little too arrogant. With its beautiful ideas, its ease of use and its highly competent internal architecture, it turns out to be a perfect tool for those who really want to take advantage of the sometimes abused philosophy of ultraportables.