Asus Zenbook Fold is a PCtransformer. This is a tablet, and a laptop, and a desktop computer. And, unlike many other hybrid products, it’s pretty good on all three counts. The key is its large 17inch folding screen, although this technology is still in its infancy.

Folding screen smartphones like the Samsung Galaxy Z Fold 4 and Z Flip 4 are already in their third or fourth generation and have steadily improved since their introduction. But foldingscreen laptops like the Zenbook Fold are still mostly firstgeneration.

In this case, we can talk about the 1.5 generation, because this model appeared about two years after the release of the first Lenovo X1 Fold laptop with a folding screen. And while the Asus version contains some improvements and offers updates over Lenovo’s first iteration, it unfortunately retains many of the same shortcomings.

The biggest change here is in the display. The Zenbook Fold uses a massive 17.3inch 2560×1920 pixel OLED display that’s great for both image quality and battery life. Being a foldable screen, it’s covered in a plastic film, which isn’t always ideal from a visual standpoint, but it does make a 17inch OLED tablet shine. And it’s better, because for 3999 euros with a 12th generation Core i7 processor, 16 GB of RAM and a 1 TB SSD, we are at a very high level.

However, despite the novelty of the giant Oled screen and the latest generation processor, the ZenBook Fold reminds us a lot of Lenovo X1 Fold. Both have flaps that do not close completely, leaving a gap when folded. The included physical keyboard slots into this space, but when fully folded, the system becomes very thick and unwieldy. Similarly, the bezel around the display is huge, giving it a dated look. New foldable laptops are on the way, and some of them will feature more modern designs, while the Asus Fold looks like it was created from the same concept as the Lenovo X1.

Three devices in one (or more)

Our favorite feature is the Fold’s ability to transform into several different terminals. It can be a 17inch tablet in portrait format or a candybar in landscape format when using the builtin stand and placing the detachable keyboard at the bottom of the screen. It can also be turned into a 12.5″ clamshell laptop with a physical keyboard located in the bottom half of the bezel, or even a 12.5″ laptop with an onscreen keyboard and lots of flexibility to place windows on the top and bottom halves. 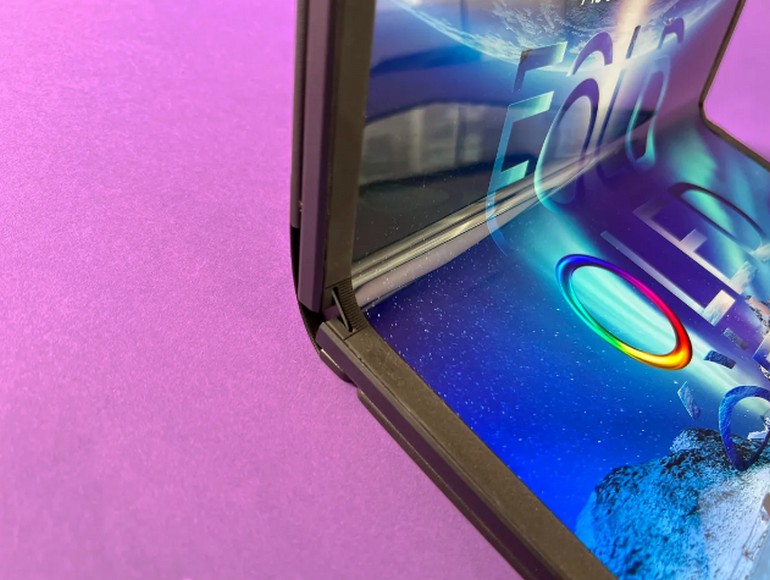 Most impressive is the allinone PC mode. 17 inches is the ideal size for viewing large documents and web pages. The kickstand is slightly adjustable and the screen tilts back slightly.

We also found the ZenBook Fold to be a great portable display for watching TV and movies in bed. Admittedly, it’s a bit heavy and frankly large for a media player in the bedroom, but this Oled XL display is fantastic. 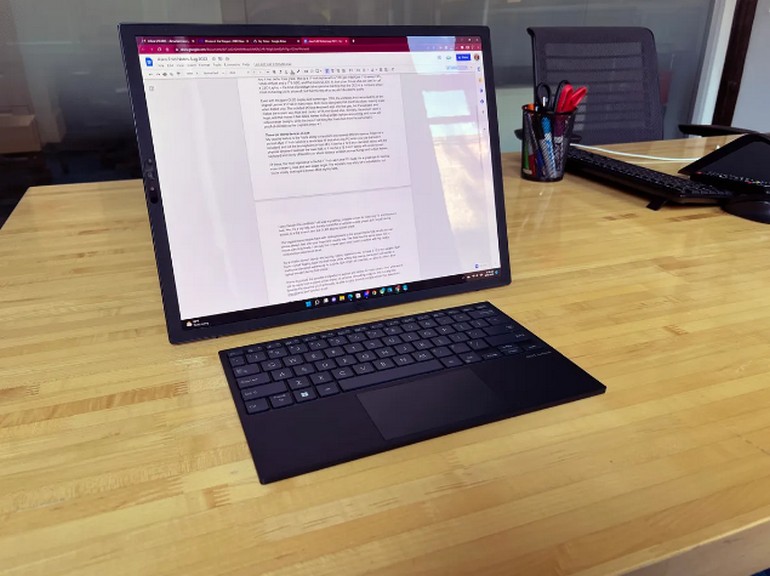 The biggest problem with folding screens is the central crease, which can almost always be felt with your finger and even usually seen. Fold is no exception to this phenomenon, but we are not at all concerned about the consumption of multimedia content.

The experience is less convincing in 12.5inch laptop mode because it makes for a bulky, heavy, and overpriced machine. If you’re going to be using the ZenBook 17 Fold in this format, it’s best to target a classic laptop.

The fact remains that this Asus foldable computer is a big step towards the idea that one day we will be able to take a single screen with us that changes size and functions at will.

Windows 11 wasn’t designed for folding screens, and Asus and Lenovo had to implement custom features to make the concept work. When switching from landscape to portrait orientation, the notification prompts us to choose the window layout, but these options are limited or do not always work as expected.

The keyboard included with the ZenBook attaches to the bottom half of the screen with magnets, and can also be used standalone as a Bluetooth keyboard. It’s great for typing, and the touchpad isn’t as responsive or accurate as the best laptop touchpads. In addition, it often happens that the connection does not happen automatically, forcing us to turn the keyboard off and on again in order to establish a connection.

When the physical keyboard is not in use, the custom virtual keyboard should be displayed in clamshell mode. Sometimes yes, sometimes no. We had to go to system settings to add an icon to the taskbar in order to activate it when needed. 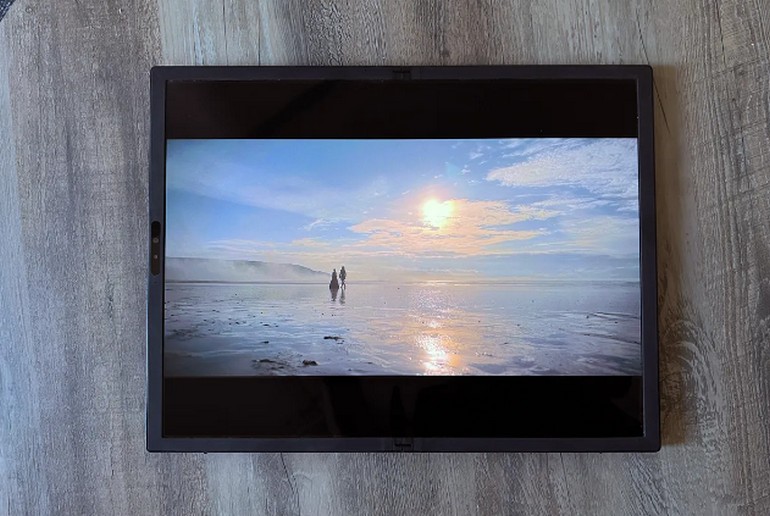 Asus offers a customization app that lets you choose the color and style of the keyboard, including a smaller version for swipe typing that’s easy to use. But the onscreen keyboard doesn’t include a touchpad by default, making it more difficult to use than a physical keyboard. Windows has a builtin virtual touchpad that is accessed through the settings menu. They can be used together, but it’s not ideal.

Both the keyboard and the system are charged via USBC. You must go through the Windows Bluetooth menu to control the keyboard’s battery level. An induction keyboard charging system would be ideal. Maybe for the next generation Zenbook Fold?

For those using video conferencing, consider the location of the webcam lens, which sits at the top of the screen when using the screen folded like a classic laptop but tilted to the left edge in landscape mode. The image quality is just great. On the other hand, our interlocutors confirmed that the sound is excellent. There is also an infrared sensor for logging in with face recognition. 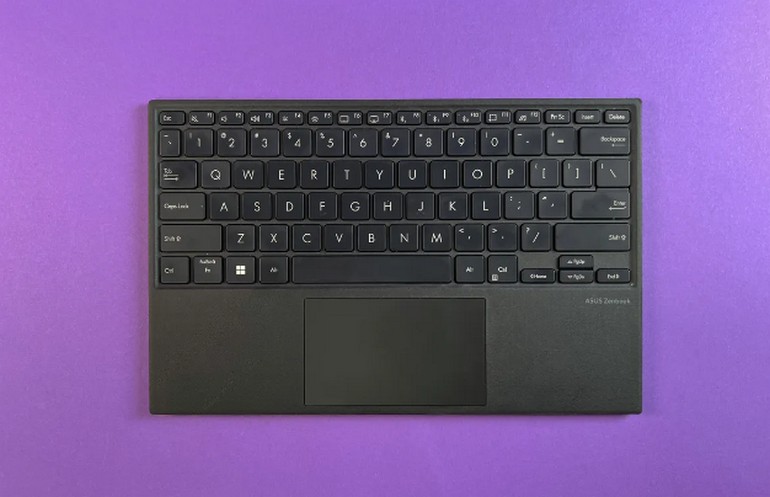 Despite having a 12th generation Intel Core i7 processor and Intel Iris Xe graphics, this system is not a lightning bolt. Considering its high price, it will run slower than other similarly configured laptops.

Better to forget about video games except for a few occasional mainstream games. On the other hand, with that large OLED screen and wireless gamepad, it proved to be a great platform for cloud gaming.

Autonomy is more satisfactory. In our endurance test, the Zenbook Fold Oled lasted 9 hours and 41 minutes, which impressed us. While it is true that many laptops last longer, that lifespan is no less excellent for a largescreen terminal, which is essentially the concept.

Does the Asus ZenBook Fold deliver on most of its design promises? Yes. Should you hack? Probably not considering its highend price. It remains a showpiece machine best left to CEOs and other influencers who love to flaunt the latest flashy but impractical innovations.

However, this foldable laptop is a glimpse into the future of personal computing. We won’t be surprised if 10 years from now we all use these folding screen terminals.