Game News Axie Infinity: the type Pokémon that wants to make you earn money with NFT

Many developers have tried to navigate, with varying degrees of success, the concept of Pokémon. Only a few studios have had the “rich” idea to mix the collection concept with NFT. These digital products are everywhere and are starting to make their way into video games. This practice seems lucrative to say the least, as the Sky Mavis company, behind the Axie Infinity game, is now worth $ 3 billion. But how do these games work and how do they want you to trade your playtime for real money?

In Axie Infinity, the player can, as in Pokémon, collect creatures, Axies, to launch in turn-based confrontations against the AI ​​or other players. Over the course of their games, the player earns potions that they can then use to allow two of their monsters to mate to create a new one. But what completely changes the situation is that these potions and these monsters are in fact NFTs: virtual objects stored on secure servers. The NFTs made a lot of noise at the beginning of the year and interfered in many areas. For good reason, these non-fungible tokens, or non-fungible tokens in French, are products that can be sold in different markets. In the case of Axie Infinity, this market is integrated into the game and quickly becomes essential for the most determined players. In fact, it takes 600 potions to allow two creatures to mate to create a new one. Those in a hurry will soon have to pay for these potions with real money rather than collecting them at the rate of 2 to 6 per game. These drinks are sold for 6 cents each, at least at the time of writing, so it will cost 36 euros to create an additional Axie. An Axie is particularly important in the game, because it allows you to generate potions, but also Axie Infinity Shards, or AXS. These allow you to obtain exclusive rewards, they can be resold like all the elements of the title, but they will also serve as a ballot to determine the future of the game The more AXS you spend, the more weight your vote will have. The luckiest players will be able to directly influence the decisions made around the title. 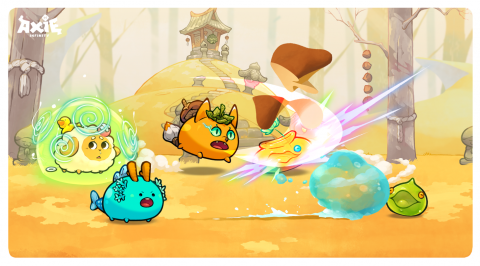 This concept may sound appealing, but keep in mind that before you can embark on the adventure, each player must have 3 Axes. To achieve this, you must go through the game market, after having created a cryptocurrency wallet. And these creatures are not cheap, since a basic Axie costs between $ 180 and $ 250. Therefore, a team of three monsters costs more than a next generation console. This front door is sure to block more than one. Defenders of the game, on the other hand, perceive these Axies as investments that allow them to earn money in exchange for their playing time. By selling Axies and potions, some players manage to generate several hundred euros per month. At the rate of a few hours of play – or work depending on your point of view – per day. Axie Infinity is already a hit, with nearly two million players logging in every month to battle and win NFT. New features have already been announced. It will be possible to buy a land that will generate money every time another player passes. Free and non-transferable axes should emerge to allow greater ease of access to the title. However, these axes should spawn potions and other resources at much lower rates.

Axie Infinity is not the only title that wants to combine virtual goods, stock market and video games. IliviumFor example, it aims to stand out by offering an open world with polished graphics. And while the NFT gaming market seems set to take off, we prefer to warn gamers who want to give it a try. If such a security declines, the risk of not recovering its costs is quite high. Therefore, Axie Infinity should be seen more like a virtual wallet than a real role-playing game. An investment does not necessarily guarantee financial success, so we recommend that you do your research and weigh the pros and cons before attempting the experiment.