UNESCO organized an expedition to Banc des Esquerquis (also called Skerki) which ended a few days ago. Coordination, location, (re)discovered wrecks and resources: the mission carried out between Italy and Tunisia is unusual.

Underwater archaeologists commissioned by UNESCO have been returning from time travel for two weeks now. Between Italy and Tunisia, Banc des Esquerquis is not accidentally nicknamed “cemetery of sunken ships.” From antiquity to modern times, many boats have run aground here. And it is not for nothing that the rocks protrude 30 cm from the surface. This area, located between the Italian and Tunisian continental shelves, is also subject to strong currents. An association that sometimes made the expedition difficult.

On board, named after a 19th-century historian, about twenty underwater archaeologists work on deck. They are going to throw Arthur into the water. Not one of them, no, but an ROV (Remotely Operated Underwater Vehicle), a kind of underwater drone designed specifically for archeology and capable of reaching depths of 2,500 meters. Indeed, none of them will put on a suit or arm themselves with an oxygen tank. “It was a little frustrating for us, since we were all divers,” admits Alison Faino, underwater archaeologist, Science et Avenir, “but the legal framework for diving in France is complex and it was difficult to adapt to 7 other nationalities on the boat, so we from the very At first they decided that only two robots Arthur and Illarion would dive.

This is the second feature of this study after the use of drones: Algeria, Croatia, Egypt, Spain, France, Italy, Morocco and Tunisia worked together on this project aimed at protecting their common cultural heritage. This is the first case of international cooperation of this magnitude in the field of underwater archeology. The UNESCO Convention on the Protection of the Underwater Cultural Heritage provides for the establishment of such cooperation, but has never been applied. 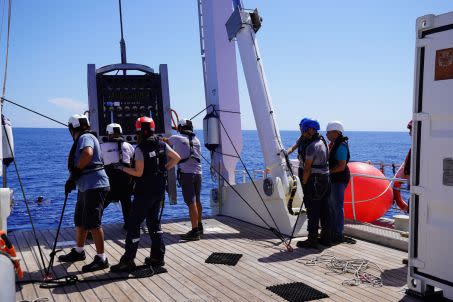