Tens of thousands of migrant workers left the Bangladeshi capital Dhaka on Sunday to return to their villages on the eve of the entry into force of an extremely strict confinement decreed due to an alarming increase in coronavirus contaminations.

From Monday, residents of the country will have to remain strictly confined to their homes and only emergency services and companies working for exports will be allowed to continue their activities.

Most economic activity, including markets, commerce, transport and offices, will have to cease by Thursday.

The measures, imposed after more than 6,000 new cases were recorded on Thursday and 108 deaths on Friday, sparked a mass exodus from Dhaka of workers on Sunday who will be deprived of their livelihood.

Interregional transport having already been suspended since June 22, workers wanting to return to their villages piled up aboard rickshaws, got on a motorbike or even hired ambulances to leave the capital in a disaster.

Ferry services were overcrowded, in some cases with round-the-clock rotations and more than 1,000 passengers on each crossing.

“We do not want them to overload the ferry. But they do not listen”, worries the policeman Mohammad Reza. “There’s a crazy rush of people,” he said.

An official with the state-owned Bangladesh River Transport Company told AFP that at least 50,000 people took the ferry across a river on Sunday alone.

At a stop of a river line in the town of Sreenagar, some 70 km south of Dhaka, several thousand people had been queuing since Sunday morning to cross the Padma, a tributary of the Ganges.

“We have no choice, we have to leave the city,” Fatema Begum, 60, told AFP while waiting for the ferry.

“During confinement, there is no work. And if we are not working, how can we pay the rent? That’s why we pack our things and go back to our villages,” she added. 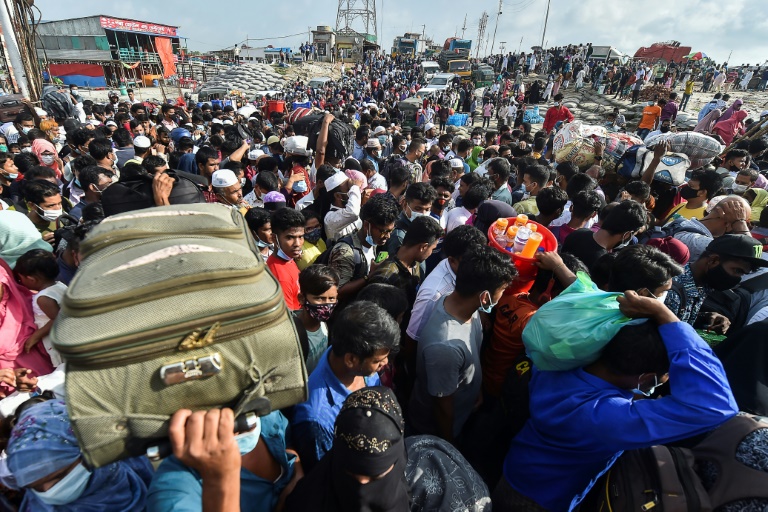 Migrant workers wait to board a ferry to return home before tight lockdown on June 27, 2021 in Munshiganj, Bangladesh (AFP – Munir Uz zaman)

Mohammad Masum, 30, a street vendor in Dhaka, prefers to return home and “spend time with his family” rather than remain confined to the capital.

Bangladesh has reported more than 880,000 infections and more than 14,000 deaths from Covid-19, an underestimated toll according to experts.