Friday’s session was not as crazy as the previous day. Market capitalization fell 0.58% but this does not prevent certain projects from experiencing very good growth on a daily basis. Harmony (ONE) is setting new highs in the market after a rally greater than 25% intraday.

Analysis of the course and the potential of the project!

Harmony is a cryptocurrency that became known to the world through the Binance Launchpad program during 2019. It was developed by Dr. Stephen Tse from the University of Pennsylvania, a specialist in cryptographic protocols. Its blockchain structure allows creating decentralized applications (Dapps) but also building NFT. The goal of the project is to promote scalability without compromising decentralization that is the essence of crypto verse.

Harmony also offers an interoperability solution between blockchains. Your main network completes transactions on Ethereum in two seconds, while it will take you 34 minutes with Polygon’s main network. Most surprisingly, regardless of the consensus algorithm of your PoS or PoW network, Harmony’s FlyClient architecture will facilitate cross-channel communication.

The forces of Harmony ONE

To guarantee the various missions mentioned above, Harmony has two great advantages:

First, use the Sharding model that It is indeed a proposed method of breaking the infrastructure of a blockchain into smaller pieces called chunks, with the goal of expanding the scalability of the network so that it can support many more users than it currently supports.

To avoid the risk of attack, Harmony uses a totally random selection technique of the nodes that will constitute the fragments. To ensure the safety of the fragments, we learned on the project site:

“Each shard has 250 nodes for a strong guarantee of security against Byzantine behavior. We use the verifiable delay function (VDF) to get an unbiased and unpredictable membership in chunks. “

Harmony has its own consensus algorithm, which is Byzantine Fast Fault Tolerance (FBFT). In this governance model, the validators of the Harmony nodes do not participate in the distribution of votes. Afterwards, they are chosen according to the number of tokens, as it is the custom in the PoS.

ONE: The Harmony Token

The cryptocurrency token is called One. ONE’s maximum offer is not available but we know that it currently has about 10,666,529,902 in circulation. It fulfills 3 main functions at the Harmony network level

Harmony (ONE) price has risen 4286% over the year. The cryptocurrency has seen three main phases of rise. A first that started in February and ended in May. During that time, ONE’s value increased from $ 0.023 to $ 0.20, roughly a 10-fold increase. The drop would be equally brutal because in June, ONE plummets towards $ 0.015.

The recovery will occur with the new bullish phase of the market that began on July 20 and will last until September. During this second phase of increase, the price goes from $ 0.017 on July 21 to $ 0.22 on the date of September 21. ONE’s second bullish phase is supported by the strategic partnership with TerraLabs.

The last bullish phase is that of yesterday’s session where the price rises to $ 0.24. It should be remembered that during the month of September the correction was less brutal than that experienced by ONE after upward movements. 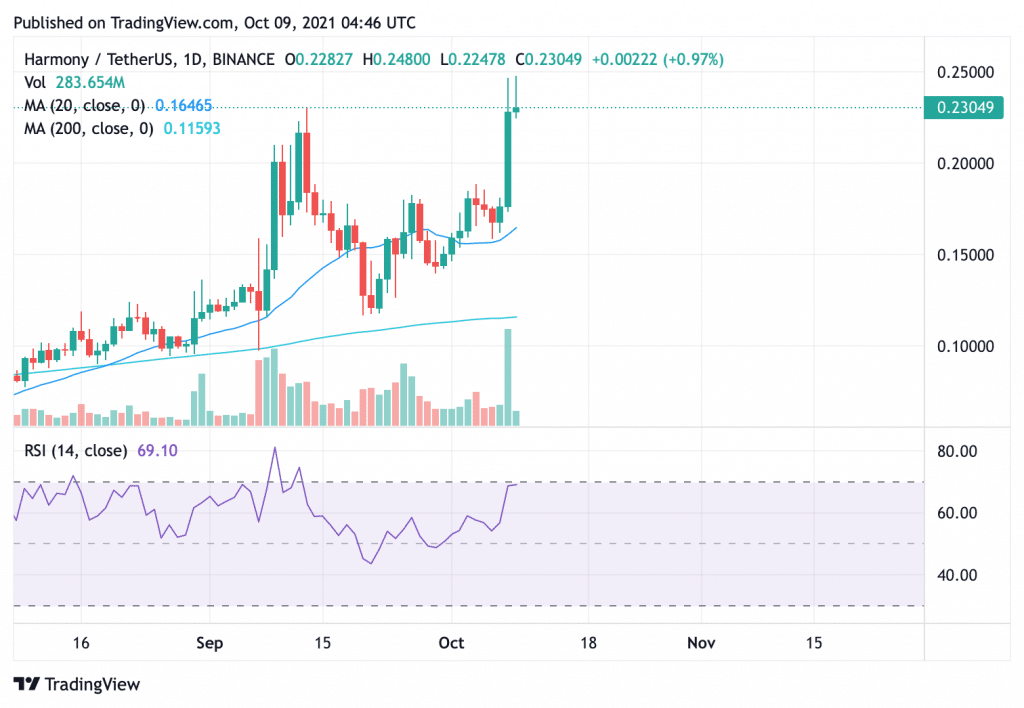 As for its current price, it is quite bullish, but correction risks must be considered because the crypto is in an overbought situation at the technical analysis level. Its RSI stands at 69.40. There is a concern that profit traders may liquidate their positions to capture profits.

However, the volume bars are green. By the way, as of this writing, intraday volume is up 596%. That means merchants keep buying. So there is a window of opportunity for those who wish to profit from the rally. Be careful, because those who have profits can withdraw their cryptocurrency at any time.