Investing.com – The price may have risen more than 5% in the past 24 hours, but it is still below the psychologically important $20,000 mark ahead of tomorrow’s decision.

The central bank is expected to raise rates by 0.75%. However, some market participants are also betting on a 1% increase in interest rates. They are based on the latest data, which turned out to be higher than expected.

If the Fed were to decide on such a rate hike, it would be reflected in risky assets such as equities and cryptocurrencies.

This does not stop Michael Saylor, a cryptocurrency advocate and Chairman of the Board of Directors of MicroStrategy (NASDAQ:), from saying that BTC would benefit from a merger with the Ethereum blockchain.

Only “proof-of-work” blockchains make sense, he says, because they are the only ones that can serve as a true store of value. moved from proof of work to proof of stake, making it no longer an alternative to bitcoin, as Sailor made clear shortly after the merger:

“There is no other alternative to bitcoin”

MicroStrategy owns almost 130,000 bitcoins and recently filed a request with the US Securities and Exchange Commission (SEC) to sell additional $500 million worth of shares. The proceeds from the sale will be partially used to buy new bitcoins.

Sailor is convinced that “a lot of people around the world need bitcoin,” which is why he supports his strategic purchases.

But then a significant recovery began, even allowing it to close above the 78.6% Fibonacci retracement. Although a low was made on the daily chart, the RSI formed a higher low resulting in a positive divergence (green lines). This could lead to a continuation of yesterday’s bounce. 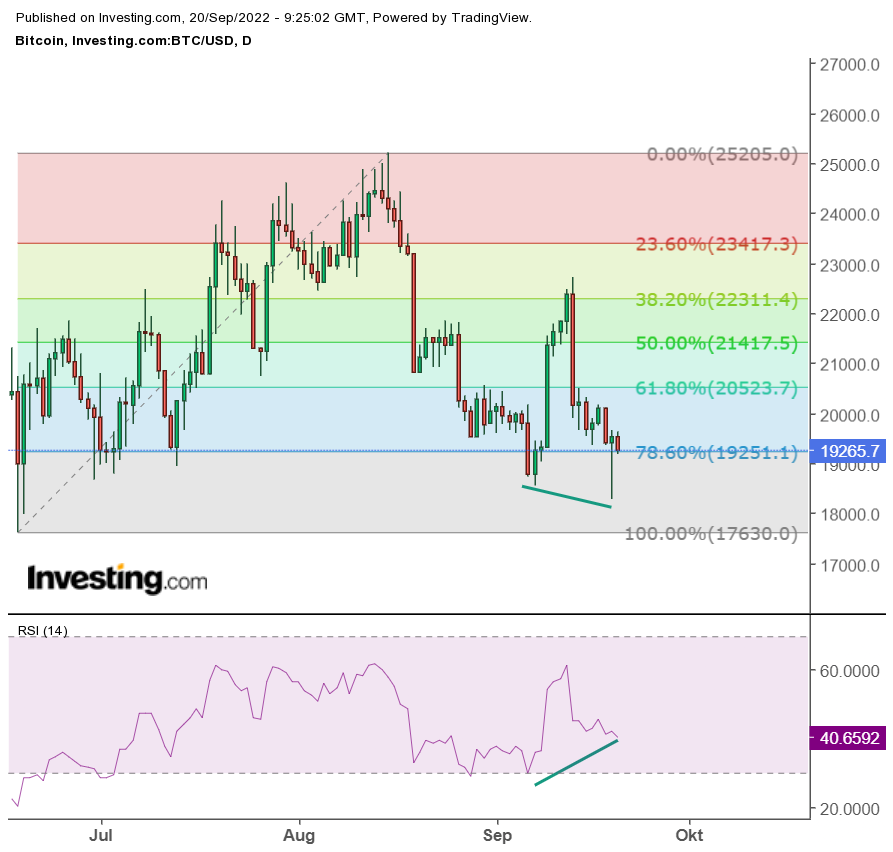 If the bulls, however, fail to reliably defend the 78.6% Fibonacci retracement, expect a test of yesterday’s low. Below that, focus will shift to the $17,630 cycle low.