In this new crypto spot of the weekend, just like every Sunday, we will focus on the overall situation in the Bitcoin and crypto markets, identifying bias, technical thresholds for observation, and what has happened in the classroom over the past 7 days. This will allow us to take a step back from our previous analysis by asking ourselves whether the established scenarios are confirmed or not.

Cryptocurrencies have crossed the threshold of capitalization of $ 1,000 billion

The price of the total market capitalization of cryptocurrencies on a daily basis (Bitcoin, Ethereum and altcoins).

Last week we discussed the resumption of technical resistance at $780 billion (not shown here), which was the first stage of an uptrend reversal. After managing to win back $800 billion and then resistance at $845 billion in the MA100 confluence, the buyers were able to make a short squeeze, leading to a very powerful bull move.

The price cap of cryptocurrencies has reintegrated the previous range, also re-establishing the pivot level that was built from September to October 2022, paving the way for a return to the EMA200 that the price has not found since last April! Although this growth is very interesting, it should not lead to weakening your vigilance in relation to financial markets.

We are on a technical confluence which is a daily EMA200 just above the $980 billion technical resistance. However, it is important to take your time and thoughtlessly FOMO the current levels, although they can be, depending on your investment thesis, quite attractive in the long run. Consolidation with a pullback is possible, but how far? In order not to break the momentum, the capitalization of cryptocurrencies may return to $850 billion to confirm the bullish exit from the range in which prices have been developing since November. 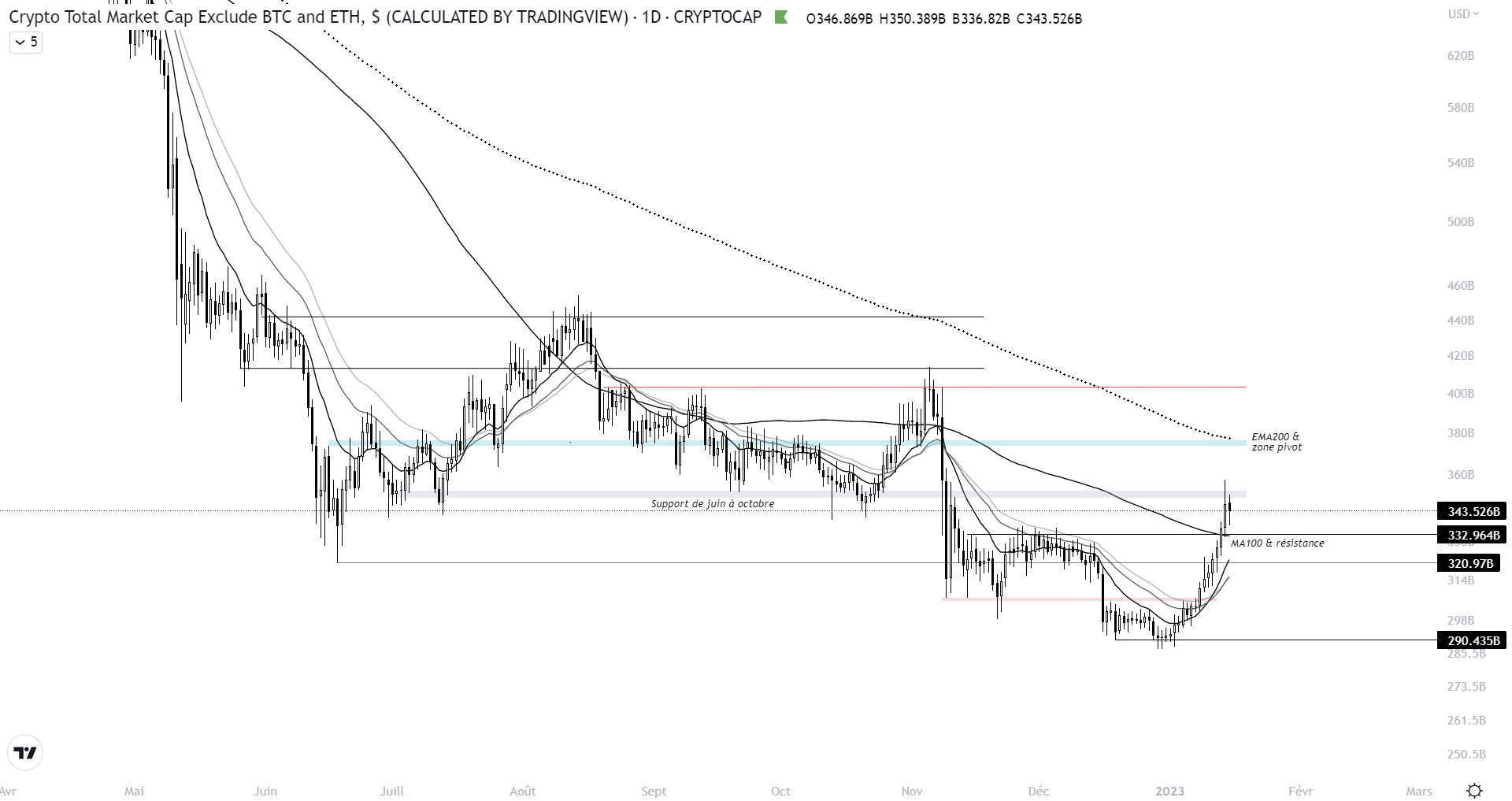 In terms of altcoin capitalization (excluding Bitcoin and Ethereum capitalization), we see price lagging as they have not reached the daily EMA of 200 at the moment. Altcoins have currently broken out of the technical confluence which is the MA 100 and the resistance level at 332 billion dollars, at which the price continued to deviate downwards in November and December.

The price is currently below the $350 billion support it held from June to October last year. For now, as the daily momentum is bullish, there is no doubt that a re-entry into this support will pave the way for a more sustainable rise for altcoins that could take advantage of this to return to the 200 EMA, which is currently in confluence with pivot zone at $375 billion.

Here are the two technical levels that altcoins will have to return if they want to return to the resistance marked in red at $400 billion. At the moment, nothing has been decided yet, despite the strong momentum we have experienced in recent days. To avoid a bearish altcoin reintegration with sellers on the rise, the ideal scenario would be to keep the price above $332 billion so as not to fall below the MA 100.

Bitcoin, which once again demonstrates its strength against other cryptocurrencies 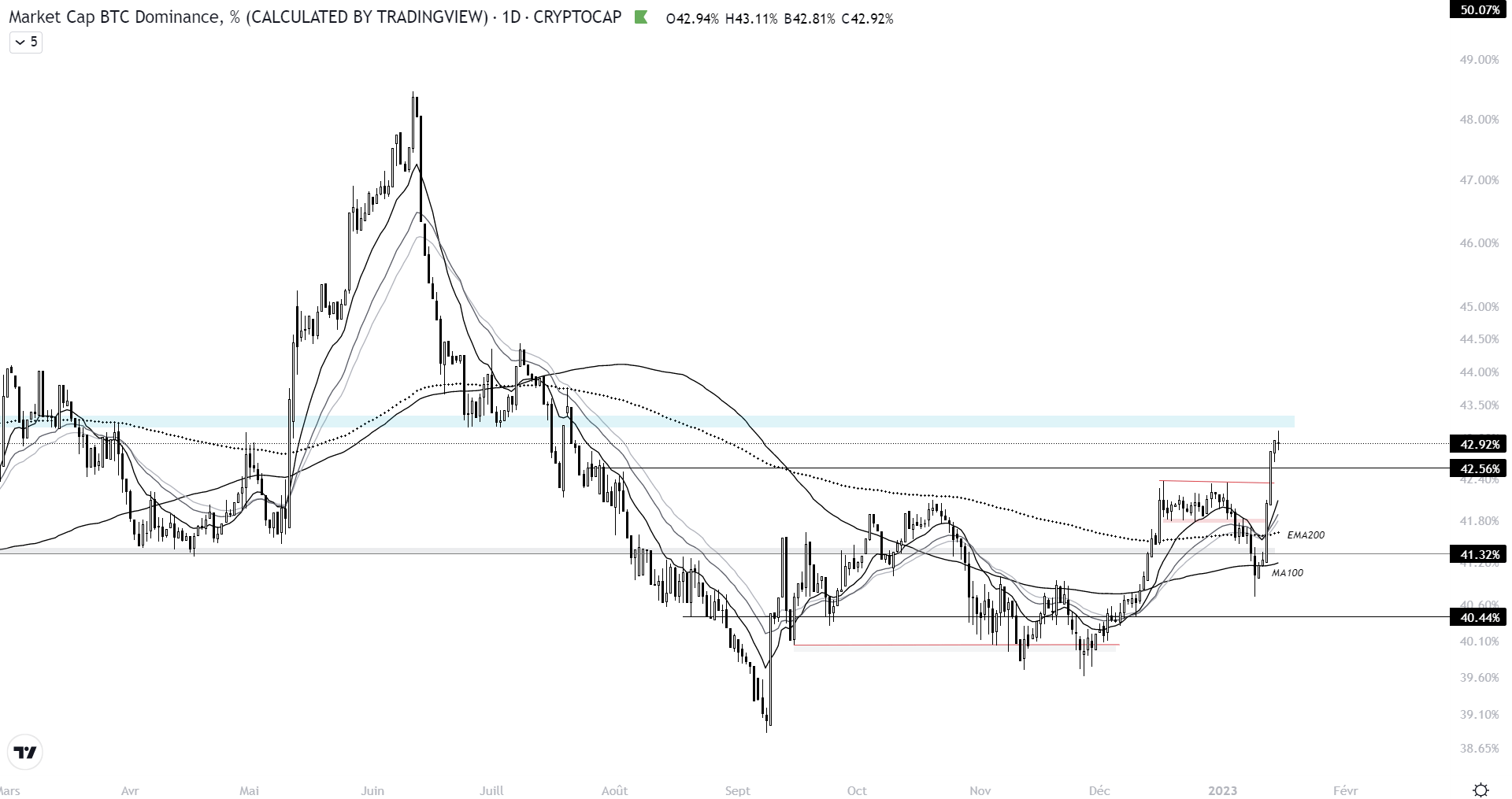 Bitcoin dominance rate over other cryptocurrencies on a daily scale (1D)

As far as bitcoin dominance goes, what happened in recent days is very interesting as the bearish scenario took place before giving way to an uptrend in the price of dominance. As agreed, the price reversed towards MA100, which caused a very strong start for Ethereum and altcoins. A large number of cryptocurrencies recorded double-digit growth. The liquidity that went into bitcoin gradually shifted to the rest of the market.

However, a very powerful rebound occurred in bitcoin, which decided to restore the status of the market leader. Although altcoin prices jumped higher, this did not stop the king of cryptocurrencies from sucking out most of the capital, giving him the chance to return to $21,000 in seconds (several days).

Having reached a key level, one can observe a decrease in the dominance of Bitcoin for a while. This would be an opportunity for the crypto market to take a break in order to achieve a technical pullback, which is necessary if we want the market to continue to rise.

Ethereum is still moving in the same technical zone 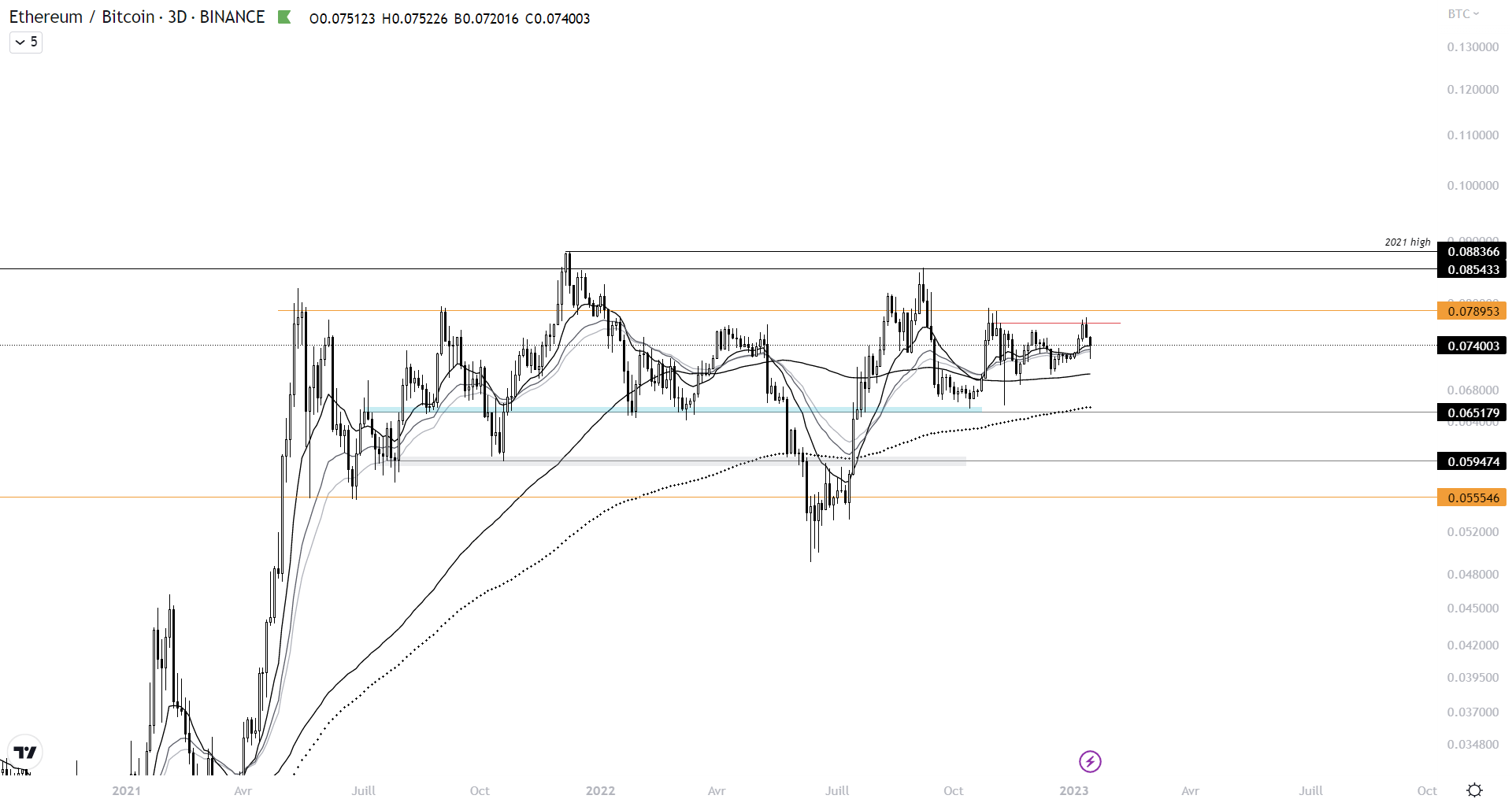 As for the Ethereum vs Bitcoin situation, we can see that the price is still moving in the upper zone of the range that has been forming since April 2021. At the moment, the price cannot overcome the upper limit of the range at the level of 0.0789. BTC, especially since the second resistance at 0.0769 BTC is slightly lower. If Ethereum manages to overcome this dual resistance, the price is likely to head towards 0.085 BTC.

It’s kind of a pressing issue for buyers who are hoping to see a massive price hike. An upward range break would give Ethereum the opportunity to lead the market and outperform Bitcoin. This would be the perfect backdrop for altcoins, which are responding more favorably to the rise of Ethereum compared to the rise of the cryptocurrency king. However, if the price fails to do so and loses its three-dimensional trend with three EMAs, the path will open for a return to the MA100 and superiority of the asset against Bitcoin. 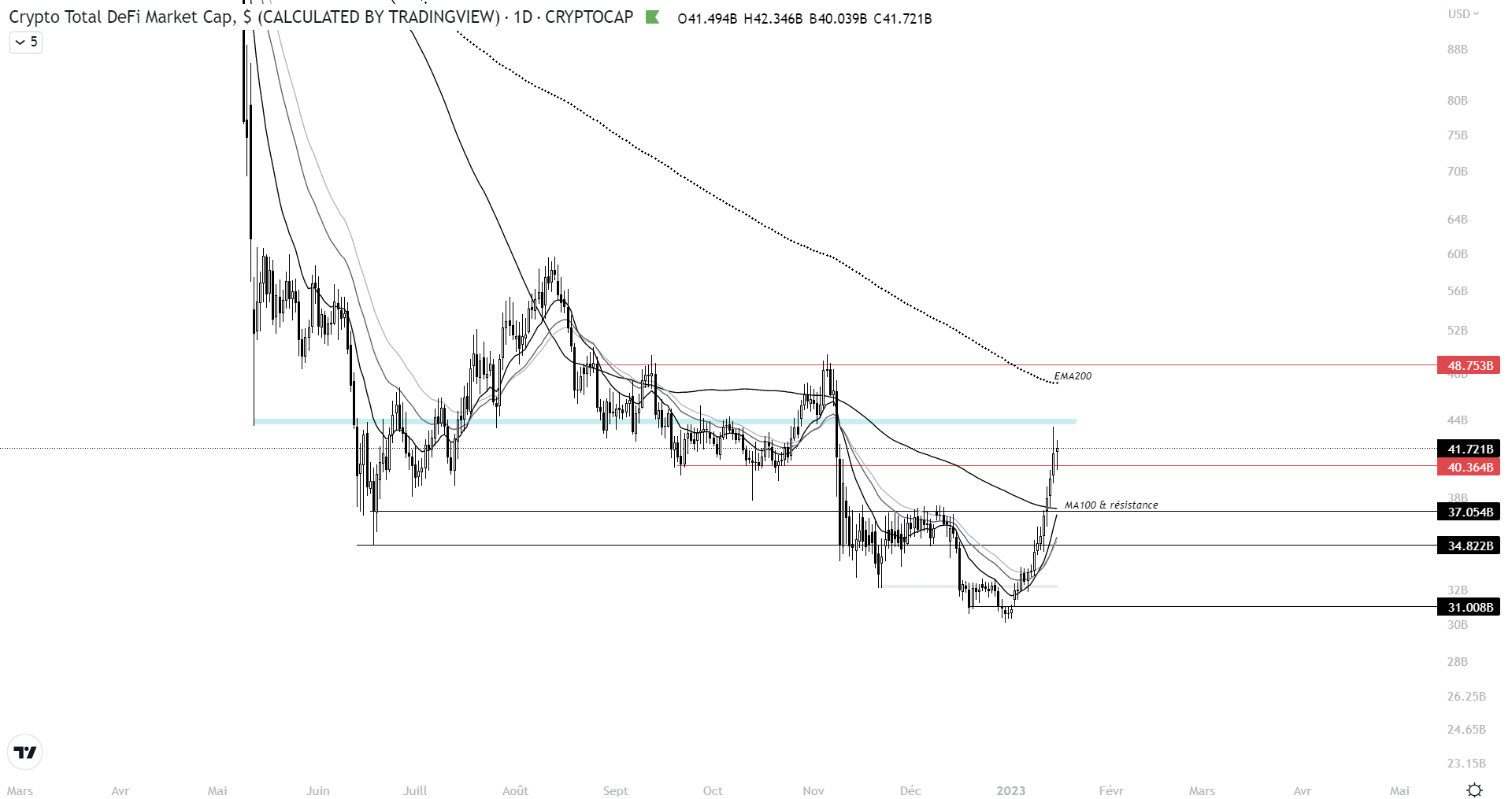 As far as the capitalization of DeFi cryptocurrencies, the targets mentioned last week have mostly been met as the price has returned to the range it developed in between September and November 2022. target: to stay in the range, staying above the lower limit of $40 billion.

If this goal is achieved, it will be a sign of the strength of DeFi assets, which should alert investors to the need to control the cryptocurrencies operating in this sector. The second issue is the resumption of the pivot zone we mentioned. If the price breaks this zone up, it could move towards the 200 EMA, where the upper limit of the range is at $48 billion.

Here we come to the end of this technical analysis. This week has been very emotional and the one that follows is in danger of being continuous as the market will have to choose between on the one hand a continuation of the bullish momentum favored by a rather weak dollar, or on the other hand a trend reversal that can be set. , marking the local peak at the current levels. What is certain is that the rally we have just experienced is powerful and a pullback will need to be noted in order for it to continue.

Take advantage of the opportunities to buy low-cost cryptocurrencies that the market offers us! In order not to miss a unique opportunity, quickly register on the Binance platform, which is the absolute benchmark in this sector. Save 10% on trading fees by visiting this link (trading link).