At stake in Ukraine is the exorbitant privilege of the dollar. Defeat will lead to the collapse of the US empire.

Ukraine, the new cemetery of the empire?

The world became unipolar after the fall of the Berlin Wall, when the United States became the unrivaled superpower. Then came globalization and the triumph of the dollar.

Three short decades later, the world has changed a lot, and the war in Ukraine seems to be the death knell for this undeniable hegemony. Or the effect is directly opposite to what was expected, namely the isolation and ruin of Russia.

“Russia is isolated, Russia is isolated,” the newspapers repeat in unison, receiving the listened media doxa directly from the Elysee Palace. In fact, the voices at the UN show that 75% of the world’s population does not follow the West. In other words, the operation to demonize Russia does not work.

We are heading for a split in the G20, with the G7 camp on one side and non-aligned BRICS on the other, which can only lead to an overhaul of the international monetary system.

Signs of de-dollarization are piling up as imbalances in the US trade balance widen. Since 1975, the United States has indeed recorded a cumulative trade deficit of over $15,000 billion. Colossal…

Countries are tired of funding Americans for free while watching the value of their dollar reserves melt like snow in the sun due to runaway inflation in the United States.

Who pouts on the dollar?

If in 2021 the yuan accounted for only 19% of trade settlements between China and Russia, now we account for more than 50%.

The Chinese Yuan is the most traded foreign currency on the Moscow Exchange. The share of daily dollar volumes has fallen from 80% to 40% over the past year. Conversely, the share of the yuan rose from less than 1% to 45%.

India also buys many Russian goods in rupees as well as UAE dirhams.

China has gone even further by asking the GCC countries to make full use of the Shanghai Oil and Natural Gas Exchange so that it can buy its oil and gas in yuan.

Saudi Finance Minister Mohammed Al-Jadaan said a few weeks later in Davos that “there is no problem discussing how we will settle our trade agreements, whether in dollars, euros or rials. Saudi Arabia”.

This announcement came as a lightning strike for the dollar, since since 1975 OPEC has accepted the dollar exclusively. Knowing that oil is the blood of any industrialized economy. It is simply the most massive commodity sold by sea.

And with the expansion of the BRICS beyond Brazil, Russia, India, South Africa and China, further growth in the de-dollarization of trade flows is expected. Brazil and Argentina have just teamed up to “reduce dependence on the US dollar.”

Credit Suisse and the End of the Exorbitant Privilege

The trend towards de-dollarization has not escaped Zoltan Pozar, an expert at Credit Suisse. The latter stated in the FT that “great power conflict threatens the exorbitant privilege of the dollar”:

“The trade surpluses of China, Russia and Saudi Arabia are at an all-time high. However, these surpluses are no longer largely recycled US government debt, which offers negative real returns due to inflation. »

Instead, Credit Suisse sees an increase in demand for gold in China. Russia, whose trade surplus jumped 86% ($227 billion) in 2022, will also not invest a dime in US debt.

Saudi Arabia is investing in mining companies specializing in extracting metals needed for the energy transition. Not to mention “geopolitical investments such as financing new Silk Roads and helping allies and neighbors in need, such as Turkey, Egypt or Pakistan,” says Zoltan Pozsar.

In short, fewer dollar-denominated transactions will reduce the amount invested in US Treasuries. In this scenario, “the exorbitant privilege of the dollar as an international reserve currency may be called into question.”

To put it even more clearly, the dollar exchange rate will fall until the US trade balance returns to equilibrium. The Americans will have to tighten their belts. 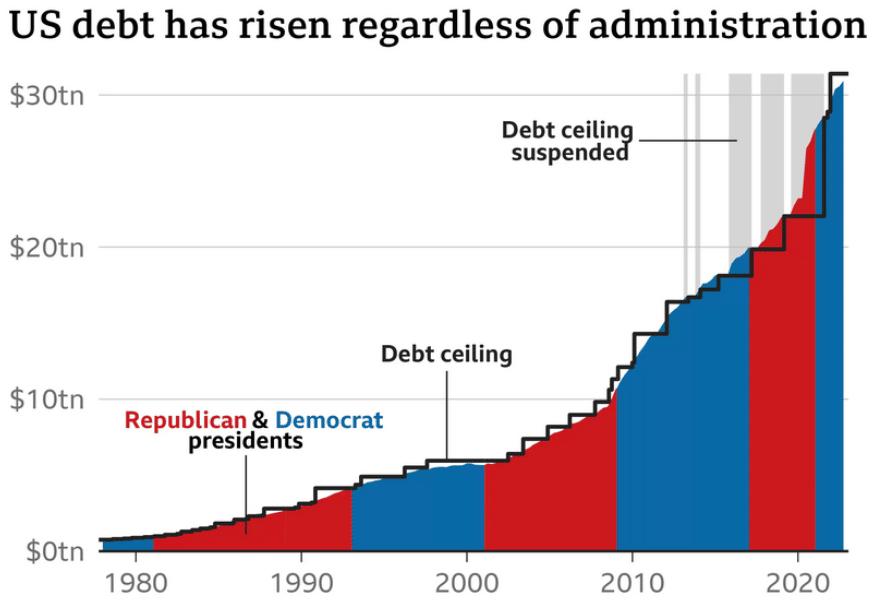 “U.S. Debt Grows Regardless of Government”

But who is investing in US debt? Aside from the Fed, US debt is shared almost equally between domestic and foreign investors. Of which, $870 billion belongs to China, up from $1,300 billion in 2013.

China no longer invests in US debt. What could be more normal when you know that the Federal Reserve Bank has bought back $6 billion of US debt since 2008. This is so much money created ex nihilo that dilutes the value of the dollars the rest of the world owns.

The gigantic US debt is annoying. Bloomberg reported on Monday on harsh criticism from Zambia, where the Chinese embassy slammed the United States for a “catastrophic debt problem.”

Imagine that just paying the interest on the US debt is currently worth over $700 billion a year. This is the same as the US defense budget. Knowing that the government is not paying interest on the $6 billion the Fed bought.

What happens if the US rolls over all of its debt with a key rate of 4.50% instead of 0.25% as it has been since 2008? It’s very simple, interest payments will then exceed 2,000 billion dollars a year. So much money that you obviously have to borrow in a crazy reckless rush.

That is why countries are losing interest in the dollar, backed by the Pontine debt, which has grown exponentially. The world is actively looking for a solution to replace the dollar, refusing to see it before their eyes.

Bitcoin is poised to become the next international reserve currency. It is debt-free, uncensored, limited to 21 million units, and stateless. It’s time for the world to face the truth. Bitcoin!

Get a digest of news in the world of cryptocurrencies by subscribing to our new service Newsletter daily and weekly so you don’t miss any important Cointribune news!

Journalist reporting on the bitcoin revolution. My articles look at bitcoin through a geopolitical, economic, and libertarian lens.