Is the tech rebound of the crypto king going to be put away in the closet soon? – Sitting in a major resistance range in anticipation of a continuation of the technical rebound, Bitcoin (BTC) is close to its $20,000 support, not far from the lows of the year. And all this in less than two weeks. Returning to the table of current uncertainties in the financial markets largely explains the relapse of the king of cryptocurrencies. And as if that weren’t enough, the Fed once again demonstrated its determination to fight inflation with all its might during a speech by its chairman, Jerome Powell, at a symposium in Jackson Hole. This dashed hopes for a reduction in monetary tightening in the short to medium term.

On the eve of a historically unfavorable September for risky asset classes, the threat of a recovery in Bitcoin’s bearish trend since its last ATH in 2021 is once again felt. Moreover, the beautiful summer dynamics received a blow. Now the tension seems to have reached a climax, so there may well be no potential positive catalysts this time around.

This bitcoin price analysis is brought to you in collaboration with Le Trading du Coin and its algorithmic trading solution finally available to individuals.

Bitcoin in weekly units – second week of decline in sight?

Except for a last-minute reversal, we will have a second week in a row of falling Bitcoin prices. But more broadly, I’m concerned about how quickly the technical rebound since mid-June is fading away. And in less than two weeks, we are practically at the $20,000 support level. This shows that the crisis of confidence in cryptocurrencies has remained in the minds of investors since last spring.

To finish, the last weekly candle saw BTC prices simultaneously break below Tenkan and Chikou Span fell to $20,000 support. In turn, the king of crypto pulls back from the bearish descending line and sees its price position below the Kumo (Ichimoku cloud) drop deep. Then, since bad news never comes on its own, let’s not forget that a shoulder-head-shoulder (ETE) pattern is being confirmed upstream, which is still a brake on a trend reversal, at least for 2022.

As such, these ominous stars are perfect to spell hell for Bitcoin in the coming weeks. In a $20,000 depression, the bear run will return in a gallop. Given the nature of the underlying risks in financial markets, the specter of new yearly lows will gain momentum. The only unknown will be the magnitude of the reduction.

The triple bottom, unfortunately, did not have the desired effect. Indeed, Bitcoin prices are dropping below the $22,000 neckline. They are now emerging from the bottom of the rising wedge.

We remind you that this is a bearish pattern, consisting of two converging ascending lines. Inside, prices must touch each of them at least twice before the third touch point occurs, which is often decisive. Almost 80% of the time, the exit is bearish. As for the final theoretical goal, it corresponds to the lower point of the bevel or, more precisely, the starting point that allowed the formation of the diagram figure. 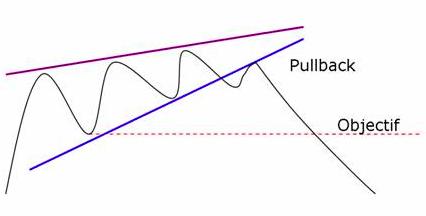 It is clear that we are not so far from this. But looking closely at the daily chart, the bearish exit from the rising wedge has put the summer technical rebound in jeopardy. Because it is BTC prices that are sharply below Kumo, and the Chikou Span has been there for several days. Thus, the chances of a threat below $20,000 will only increase. If the fourth attempt in daily units is correct, the last bull run will take very little time in case of a return to support … of $12,000.

As such, Bitcoin seems to have lost track of its technical recovery since mid-June. To the point that many investors will expect a resumption of the bearish trend since its last ATH in November 2021. Not only is the current financial market uncertainty continuing to be bogged down by the Fed’s more restrictive-than-ever monetary policy. . But from a strictly seasonal perspective, September has historically been a high-risk month for risky asset classes.

As for the graphical aspect, I will keep an eye on the important thickness of the future Kumo in weekly units. This could prove to be an obstacle if prices try to cross it in the near or distant future. And although I am going prematurely, the trend will look for the next downside wave in case the $20,000 support is breached. Conversely, a return to summer highs would be necessary to hopefully prolong the technical rebound.

Is it possible to be a winner every time? Whether the price of bitcoin is in great shape or is experiencing turbulence, Coin Trading invites you to increase your chances of success. Indeed, Trading Du Coin allows individuals to access an algorithmic and 100% automated trading tool. A true trending engine, follow our trading link to test this tool designed to adapt to market reversals and position yourself on the most dynamic crypto assets of the moment.