The price of Bitcoin (BTC) broke the long-term descending resistance line and confirmed two bullish data within the RSI.

The price of Bitcoin has been declining below the descending resistance line since its all-time high of $69,000 in November 2021. In October 2022, Bitcoin broke above this line and confirmed it as support (green arrow) the following month. Since then, the price has been moving higher and formed an impressive bullish candle last week. If this uptrend continues, the immediate horizontal resistance is at $24,300 and the immediate Fibonacci resistance is at $35,780.

However, it is not the price action that presents the most interesting signals for bitcoin, if not the asset’s RSI.

Indeed, this indicator has been declining below the descending resistance line since the beginning of 2021. Its divergence below this line started the bearish market that Bitcoin is currently in. After the July 2022 low, the indicator appears to have formed a bullish divergence (green line).

Last week, a bullish candle made the RSI cross the trendline after 721 days. The RSI has never before had a trend line for such a long period. Moreover, this break confirmed the presence of a bullish divergence within the indicator.

As a result, the technical analysis of the weekly data is clearly bullish. A weekly close below $17,000 would make it bearish.

So, a support rally or a new bitcoin bull run?

There are three potential waves for bitcoin and all three point to an upward move that is expected in the short term.

The most plausible count would be that the price of Bitcoin has completed a five-wave decline, which is the first part of a long-term correction.

Thus, the price has started the ABC (black) uptrend, which may end not far from the 0.5 Fibonacci retracement and at an average price of $42,150. Then one would expect further declines in BTC.

Thus, this is the most plausible count given that none of these waves is found to be disproportionate to the other. In addition, the fourth wave took the form of a triangle.

A drop below the low of $15,558 will negate this count and form a future bearish price trend.

The second potential account suggests that the correction is complete. As part of this count, Bitcoin would have completed a complex structure in WXYXZ and has now begun a new uptrend that will eventually take it to a new all-time high (ATH). In this case, the price of BTC has already reached its floor (or bottom).

The only problem with this count is that the Z-wave is too small compared to the W and Y-waves, although this element does not appear on the algorithm plot. The level that cancels out this account is also at $15,558. 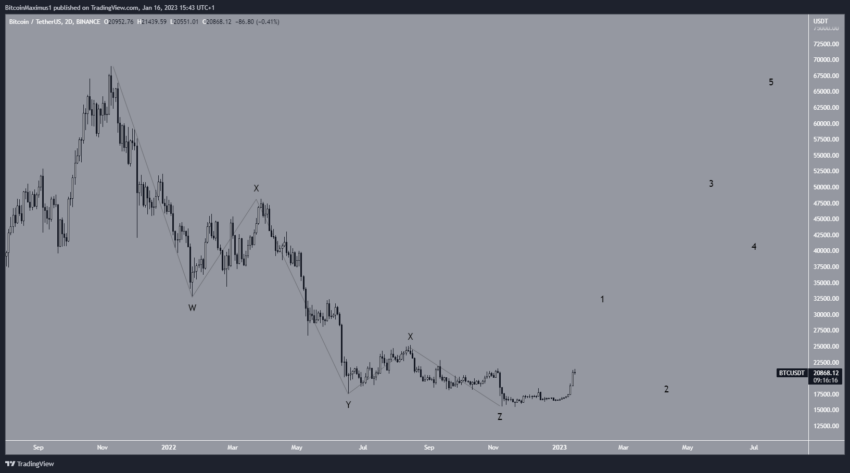 The third and final count suggests that the price of bitcoin is still in its fourth wave. The most plausible target for the top of this fourth wave is just above the August 2022 high near $25,000.

This is the only wave count that does not give a bullish price prediction for bitcoin in 2023.

In conclusion, Bitcoin price action appears to be bullish, this is due to the weekly RSI data, especially its bullish divergence and downtrend line crossover. Although there are three possible scenarios, all three assume that the upward movement will continue, at least in the short term. A drop in BTC below $15,558 will invalidate this bullish outlook.