Without a single explosive news that many can blame for the sell-off, investors are wondering what caused the price action. Some pointed to macro indicators, technology stocks of the Nasdaq enters “correction territory” and several interest rate hikes are expected in 2022.

But the price of Bitcoin moves in mysterious ways. It could well be the news that Bitcoin bull Raoul Pal has apparently sold all of his Bitcoins and there is only one left…

Rekt Capital’s Twitter account noted that the current trend “shares some similarities with price action at the end of September 2021.” During this time, Bitcoin fell multiple times from around $52,000 to around $41,300 from September to October. It rose to around $69,000 USD in early November.

The InvestAnswers account with more than 85,000 followers suggested that bears “need a bitcoin under $41,000 to pocket $132 million in profits.” 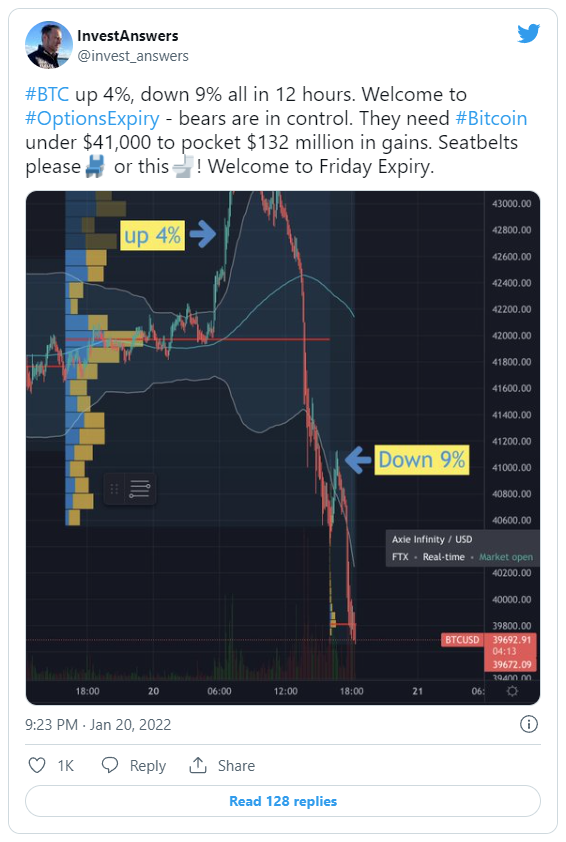 Bitcoin is not the only cryptocurrency dipping today Ethereum (ETH), Binance Coin (BNB), Solana (SOL), Cardano (ADA) and Ripple (XRP) all saw severe corrections between -6.3% and -10% on the last 12 hours.

Of all the top ten coins by market cap, ADA suffered the largest overall losses as it fell 10% to $1.21 USD. Today’s buggy launch of SundaeSwap didn’t seem to help.

Forbes contributor Billy Bambrough suggested in an article today that investors have been unsettled by recent announcements by the Federal Reserve that it will shrink its balance sheet and raise interest rates.

Brian Newar has been exploring and writing about the blockchain industry since 2017. Born and raised in the United States, Brian is based in South Korea, where he has covered the local blockchain industry, with a focus on regulations and cryptocurrency exchanges.

Ellipal is one of storage devices the most advanced to store and use Bitcoin and other cryptocurrencies safely.

Disclaimer: The information and opinions contained in this report are provided for general information only and do not constitute an offer or solicitation to buy or sell forex, CFD and cryptocurrency contracts. . Although the information contained in this document has been obtained from sources believed to be reliable, the author does not guarantee its accuracy or completeness, and assumes no responsibility for any direct, indirect, or consequential damages that may result from anyone’s reliance on such information. information.