The king of cryptocurrencies at the crossroads! As I feared, September is not off to a good start. This confirms at time T that this is traditionally an infamous month for risky asset classes. And even less so during the bear run, as was the case with bitcoin (BTC) in 2014 and 2018. It would seem that 2022 will not escape this fatality, although all hopes still remain.

Moreover, profits from its technical recovery since mid-June have evaporated in two weeks. The story that the sellers consider it a point of honor is that the bearish price increase for BTC since the last ATH in November 2021 is poised to resume. Like it or not, the lackluster backdrop in the financial markets is likely to tip the wrong side of the barricade. To the point that the king of cryptocurrency can lose a lot of money.

This bitcoin price analysis is brought to you in collaboration with Le Trading du Coin and its algorithmic trading solution finally available to individuals.

Bitcoin in Monthly Units – Back to the Harsh Reality of the Bear Run!

July was full of hope. But, unfortunately, the second half of August turned out to be fatal. It is with prices close to the lows of the year that Bitcoin begins September, which is considered the worst in the last few years. Let’s be honest! The king of cryptography somehow pressed himself against the wall.

The closing of the last month (in August) is not encouraging. Because it is he who almost covers July. From now on, the $20,000 support that has defended itself well may finally give up. And with the Fed determined to continue tightening monetary policy, sellers will be in a strong position to strike a decisive blow to the bear run.

At the same time, investors should not worry too much about supposedly good prices relative to Ichimoku. On the one hand, the Chikou Span, although above the Kumo (cloud), will bog down under BTC prices in the coming months unless there is an exceptional rise. And on the other hand, the bearish crossing of Tenkan and Kijun against the first may be a counterbalance to the return to the bullish cycle. With the fear that the king of crypto might spend 2023 as a year of transition or stagnation after the end of his yet-to-be-defined bear run.

With a close above $19,557, Bitcoin could avoid a tripartite turn to bright red. However, prices are unable to move up the slope to move away from the breakdown of support at $20,000. This threat is becoming permanent. Moreover, sellers are starting to test this critical level. At the moment there is no fire on the lake. But we will have to wait for aftershocks, hoping that this weekend will not end in the worst way. 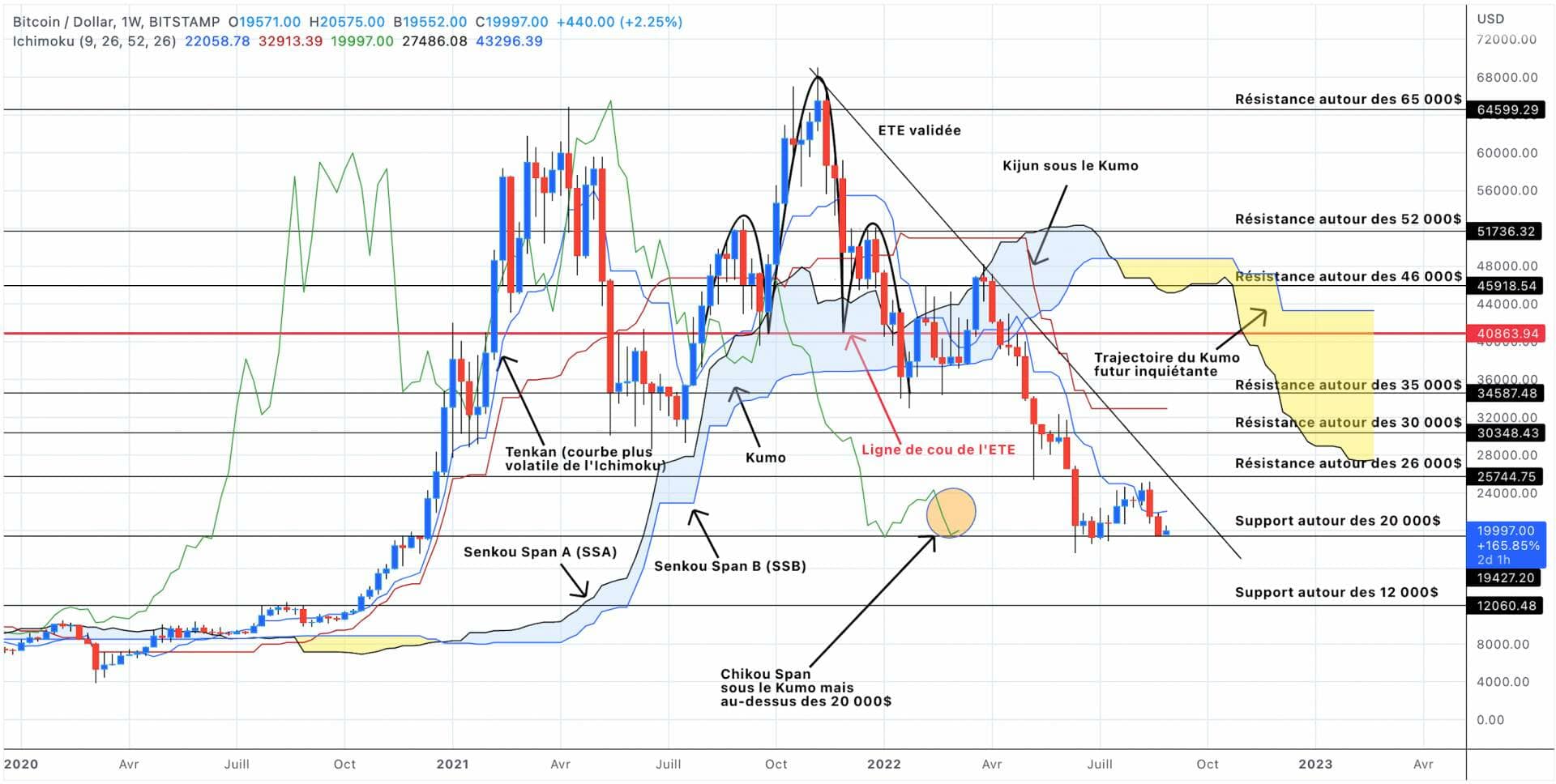 At the moment, I see that nothing has changed in the price position of BTC and Chikou Span in relation to Kumo since May last year. Hence my justified pessimism about a possible reversal of the bearish trend. Even the crossing of the descending line does not allow us to consider it, given the deviation of the price from the weekly Kijun and the significant thickness of the future Kumo. Which will still keep Chikou Span under the cloud.

The best we could hope for would be a quick recovery of summer highs around the $26,000 resistance area. A sine qua non return above the weekly Tenkan. Otherwise, sellers would have buried the last hopes of buyers by pushing Bitcoin prices towards the $12,000 support.

Now that Bitcoin has reached the ultimate target of the rising wedge, sellers are holding back in anticipation of catalysts that could finally bring the point to $12,000. So much so that the triple bottom drawn in previous market points no longer holds water. Now prices are simultaneously lower than Tenkan and Kumo. Luckily, they are maintaining $20,000 support as we speak. Which could potentially offer a last chance return. 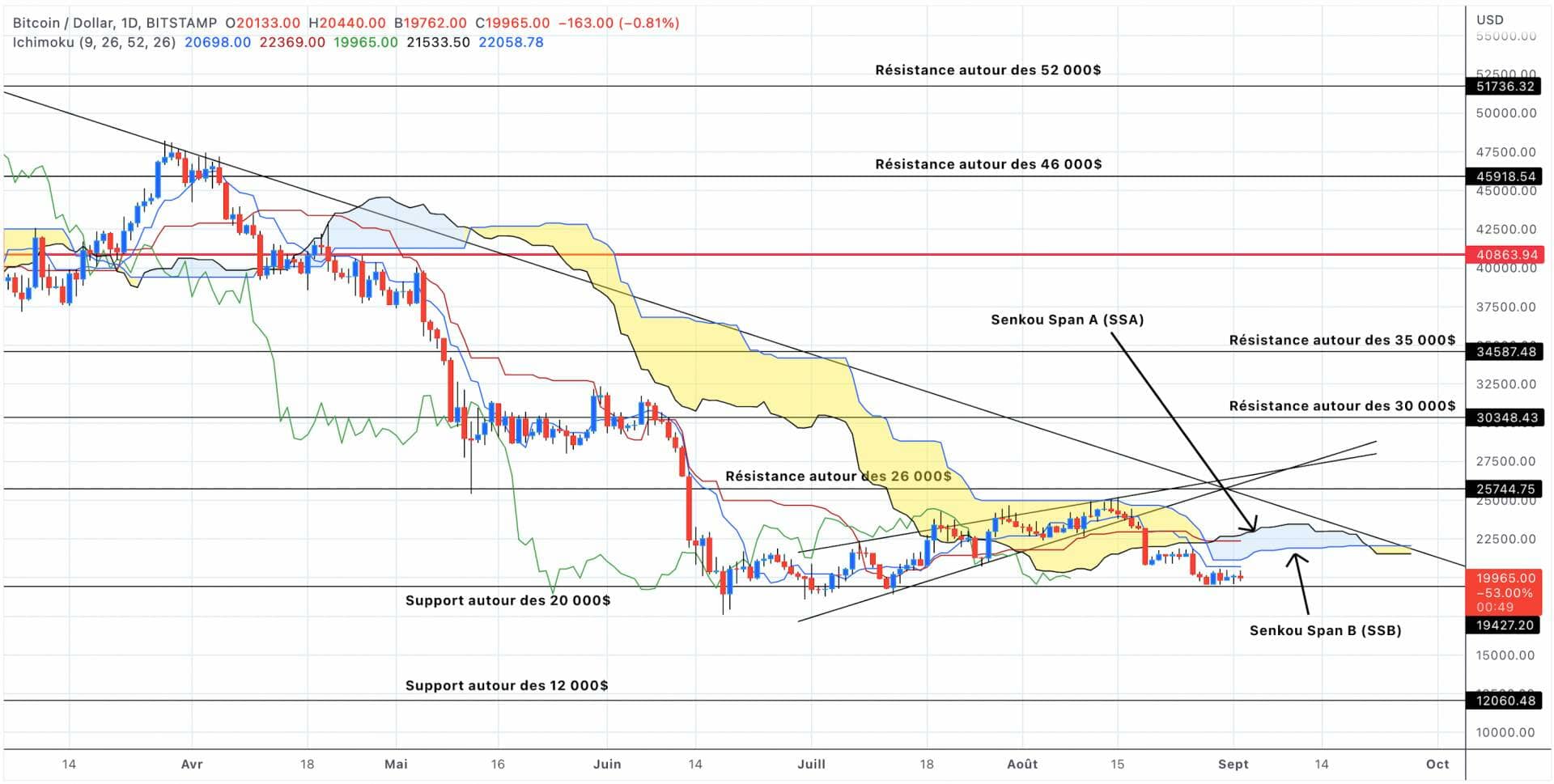 If this favorable technical signal had materialized in daily terms, BTC prices would have crossed the Tenkan in the first place. But in order to stem the bleeding over the past two weeks, a price movement outside the Kumo would be vital as prices could favorably threaten the downline and resistance at $26,000. This is consistent with the return of Chikou Span to the interior of the cloud.

While this is my personal belief, we are closer to resuming Bitcoin’s bear move since its last ATH in November 2021. The ongoing tightening of the Fed’s monetary policy is not only not conducive to risk appetite. But to make matters worse, the renewed intensity of the current uncertainty in the financial markets could once again expose asset classes most sensitive to liquidity, and cryptocurrencies in particular, to an oil shelling.

For me, the most important thing is to analyze the price structure, especially in the long term. And it is clear that the weekly chart would seem to me more informative than the chart in monthly units. Because without first-class catalysts, the prices of the king of cryptocurrencies would have all the trouble in the world to cross the significant thickness of Kumo predicted in the first quarter of 2023. Enough to gnaw at the bit for another bull run.

Is it possible to be a winner every time? Whether the price of bitcoin is in great shape or is experiencing turbulence, Coin Trading invites you to increase your chances of success. Indeed, Trading Du Coin allows individuals to access an algorithmic and 100% automated trading tool. The real mechanism of the trend. Follow our commercial link to test this tool, designed to adapt to market reversals and position yourself on the most dynamic crypto assets of the moment.