Scientists have discovered tree fossils in a forest 290 million years old, before the arrival of dinosaurs, in the Brazilian state of Parana (south), a “window into the past” to study plant evolution.

The discovery of this petrified forest of 164 lycophytic trees (without fruits, flowers or seeds) of an now extinct variety is “the most important in the southern hemisphere” in terms of quantity and quality of preservation, explains Tammy Mottin, a geologist at the university. from Parana.

“These plants, which are estimated to be 290 million years old, represent very primitive life forms in the history of the Earth,” continues this scientist, who conducted his research in partnership with the universities of Rio Grande do Sul (southern Brazil). and UC Daves, USA.

This forest, which grew near where the city of Ortigueira is today, “shows how the first plants spread, how they were distributed in space and what their interaction was” with other life forms.

A few rare similar discoveries have been made in the southern hemisphere, especially in the state of Rio Grande do Sul or Argentinean Patagonia, but they are all much smaller.

The Petrified Forest of Paraná was discovered at the end of 2018 by chance during geological surveys to build a road to the plant. 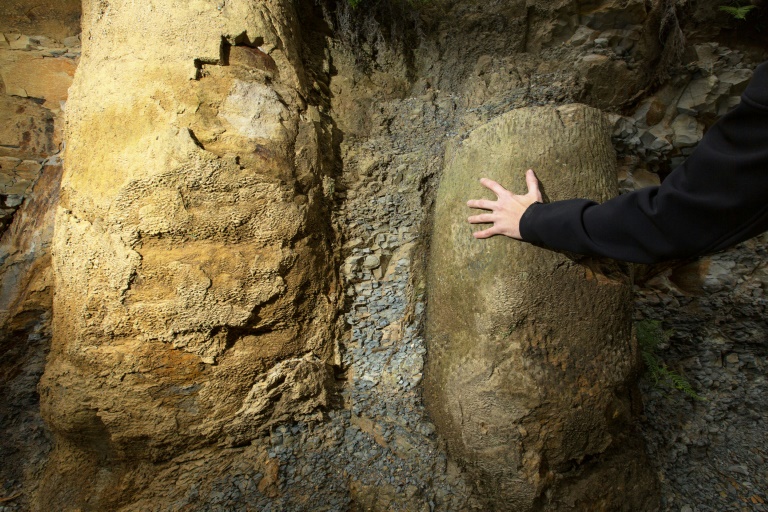 Fossils of trees from a forest 290 million years old, before the arrival of dinosaurs, discovered in the Brazilian state of Parana (south) (AFP/Archive – Ricardo Cicarelli)

A long-term study was then launched, and the results, published in February in the scientific journal “Paleogeography, Paleoclimatology, Paleoecology” by the Dutch group Elsevier, were recently popularized in the Brazilian press.

The exceptional preservation was made possible by the fact that the trees “were buried while they were still alive and then gradually covered with sediment,” explains Tammy Mottin.

The forest was then “preserved almost as is” after it was covered by a frozen river.