The state announced last week that it would ban the sale of new gasoline vehicles from 2035. Temperatures of up to 44 degrees were expected in the Los Angeles suburbs, when a heat dome looms over the American West. Exhausting weather is expected to put pressure on an already overburdened power grid, especially during the hottest hours when air conditioning systems needed in the United States run at full speed. “Consumers are strongly advised to reduce their energy consumption between the hours of 4:00 pm and 9:00 pm, when the system is busiest, as demand remains high and there is less available solar power,” said the American Catering Association, which represents utilities.

California authorities want new “zero-emissions” cars to be non-polluting no later than 2035.

The organization said the top three recommended measures are: set the thermostat to 25°C or more, avoid using large appliances and charging electric vehicles, and turn off unnecessary lights. Electricity is a sore subject for the state, whose infrastructure is in a dilapidated state. Electricity companies regularly ask households to limit consumption during certain hours when solar panels stop generating electricity and demand remains high due to the heat. But the call not to charge your electric car has been widely ridiculed on social media while the state is promoting this type of vehicle. “California just made electric vehicles mandatory and asked residents not to charge them between 4pm and 9pm?” Republican Senator Tom Cotton joked on Twitter.

On Thursday, California authorities announced that new vehicles sold must be zero-emission vehicles by 2035 at the latest. The decision was seen as a turning point for the electric vehicle industry, as California is an important automotive market and has the potential to impact national or international standards.

The US Weather Service (NWS) has issued an “excessive heat” warning for much of California, as well as parts of Arizona and Nevada. “Dangerous heat wave expected” until Sunday evening, the weather service warned, warning of the health risks associated with the heat wave. 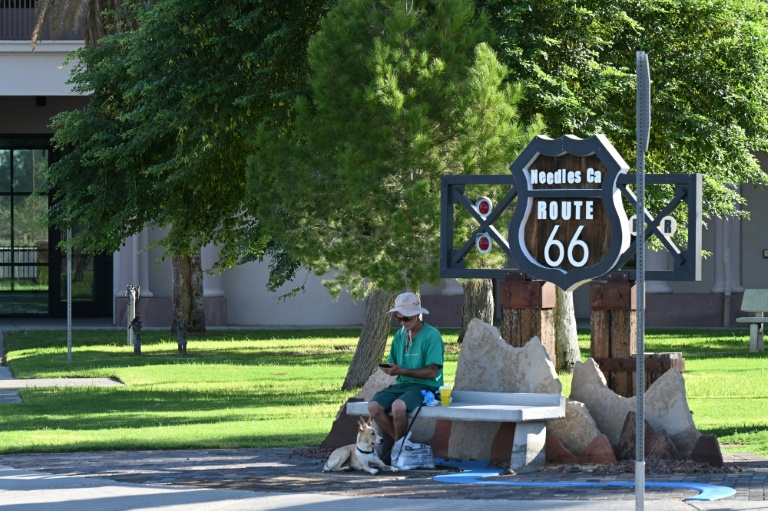 A man sits in the shade during a heat wave in the Needles on August 31, 2022, California (AFP – Robin Beck)

“Those who do not have access to an adequate and reliable air conditioning system and source of hydration are at the greatest risk, but a large proportion of the population is likely to suffer the consequences.” The night will bring a little respite, in many places the temperature will not drop below 26°C. In southern California, heatwaves in September are not uncommon, but temperatures above 37°C are considered very hot, even for an area known for almost constant sunshine.

This heatwave comes as large swathes of the country’s southwest have recently been hit by rare-intensity thunderstorms and heavy rainfall. Desert Death Valley was flooded and one person died after flooding Friday in Utah’s Zion National Park, famous for its red cliffs and canyons. Scientists have been warning for years about the impact of global warming, caused in particular by the use of fossil fuels and greenhouse gas emissions, which is now evident to millions of people. Heatwaves are becoming more extreme, and storms that were once rare weather events are becoming more intense and frequent.