Warzone is blowing out the last candle with its fifth and final season of Last Stand. This new arrival of content has been revealed to us in detail and promises a beautiful finale to Activision’s Battle Royale.

[Mis à jour le 22 août 2021 à 10h59] With forty million active players, Call of Duty: Warzone is still one of the most popular games in the world. Activision-Blizzard’s giant battle royale, released in 2019, brings us the fifth new season of in-game content, aptly named The Last Stand. Indeed, this chapter will be the last passage in the Warzone book before the highly anticipated Call of Duty: Modern Warfare 2 arrives in October and its standalone Battle Royale Warzone 2.0 later this year. In the meantime, the first of the named Warzones is set to come out in style with its new season of Last Stand, which we’ll explain to you all about.

If you’re looking forward to the new season of Call of Duty Warzone content, The Last Stand is scheduled for August 24th, and if the previous season’s Battle Royale launch is to be believed, the patch update should be out around 6pm (French). time). 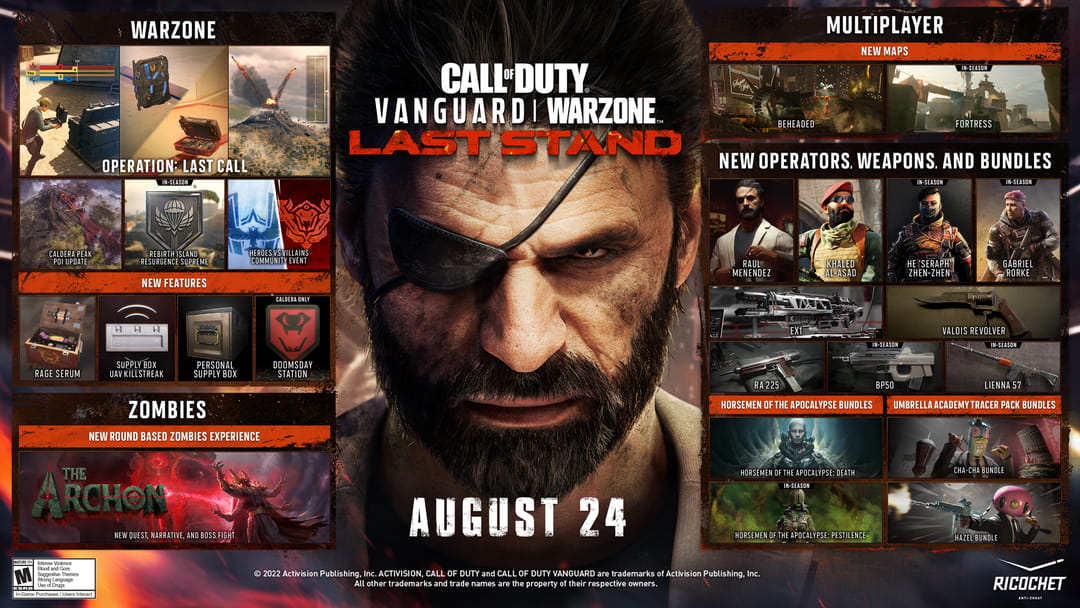 As you can see in this Call of Duty: Warzone and Call of Duty: Vanguard Season 5 Last Stand roadmap, the additions to the game’s content are varied. First of all, the Caldera map will be heavily modified by the Caldera Peak volcano eruption, which will create a new point of interest where players can compete while avoiding lava flows. In addition, on this very Caldera, players will be offered a new Gulag.

Among the new weapons that can be found in the game, we find the RA-225 submachine gun for close combat, as well as the Valois revolver and EX1 heavy machine gun for lovers of large calibers. During the season, the BP50 assault rifle and the LIENNA-57 machine gun will be added to the arsenal available in the game. As for game modes, we are waiting for the new Last Call mode, a kind of large-scale two-team Search and Destroy map on the Battle Royale map. , as well as a Heroes vs. Villains mode later in the season.