What if you could ask artificial intelligence to explain to you how a quantum computer works, how to redecorate your interior, or how to deal with relationship problems?

The experience is now possible with the impressive ChatGPT, a conversational tool created by the OpenAI company. It was tested by a million users in just a few days, its creator Sam Altman announced on Monday, December 5th.

It is based on a machine learning technique called Reinforcement Learning Based on Human Feedback. In other words, people helped him grow by giving him a lot of text data.

ChatGPT’s detailed responses impress users, who have posted numerous posts about machine interactions on social media, as well as its ability to recall previous conversations and recognize errors.

Numerous discussions on Twitter have proven the versatility of the software, being able to expound politics and philosophy or compose poetry on a wide variety of topics. Some have even announced that the tool will replace teachers or make exercises given to students obsolete, as they can be completed with two clicks.

Many media outlets have also tried to write their articles with ChatGPT, amazed by its ability to write fluently and clearly. It is especially capable of creating complex tutorials, such as learning to program in Python, as demonstrated by the user.

Um… I just had a 20 minute chat with ChatGPT about the history of modern physics. If I had this shit as a high school and college tutor… Oh my god.

I think we can reinvent the concept of education at scale. The college as we know it will cease to exist.

Not content with a precise answer to the questions put to it, artificial intelligence is also able to give a detailed answer. When asked “is it right or wrong with nuclear power”, ChatGPT reminds us, for example, that the term “right” is too vague to warrant serious thought.

The tool differs from Google in that it sorts information for the user, which has even less work to do than using a search engine. 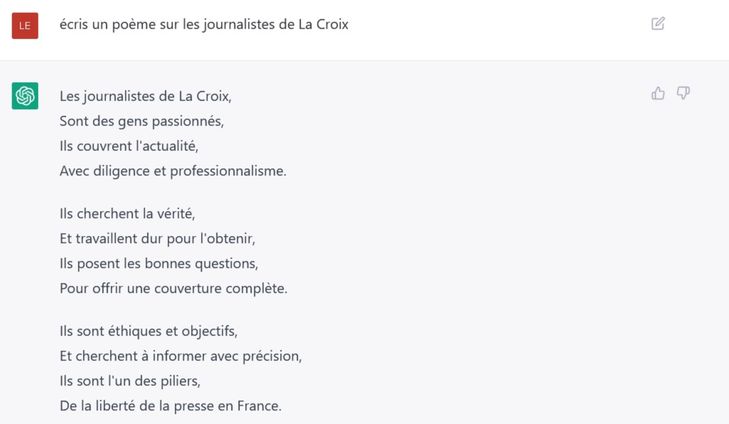 However, the intelligence of ChatGPT has its limits. When faced with certain questions, the tool gives incorrect or even absurd answers. On Twitter, the app, in part, responded to the user that “world peace is far from the desired ideal.”

He has also been accused of integrating prejudices that discriminate against certain groups of people into his algorithm, and of providing dangerous information, such as a method for making explosive objects, if the question is asked correctly.