Hundreds took to the streets on Sunday in Beijing, Shanghai, Wuhan and other cities in China to protest excessive lockdowns, a rare show of hostility towards President Xi Jinping’s regime and his draconian “zero Covid” policy practiced for nearly three years.

Unexpected, mass and endless detentions until the slightest case is discovered, the systematic quarantine of contact cases in the camps, and the negative PCR tests required almost daily to enter public space are increasingly irritating the Chinese population.

The dissatisfaction is fueled by several high-profile cases in which emergency services would be slowed down in their intervention due to health restrictions, with fatal consequences.

Many of the posts circulating on social media have claimed that the anti-Covid measures have exacerbated this drama, with cars parked for weeks in the narrow alley leading to the burning building making it difficult for help to arrive.

On Sunday evening, police trying to evacuate people from a previous demonstration clashed with groups of protesters in the center of Shanghai, a metropolis whose 25 million inhabitants were in debilitating isolation for two months at the beginning of the year, AFP noted. .

Clashes between police and demonstrators against the Chinese government’s “zero covid” policy on November 27, 2022 in Shanghai (AFP – HECTOR RETAMAL)

Earlier in the day, a crowd gathered on Ulumuki (Urumqi in Mandarin) Street, and a video widely shared on social media and geotagged AFP shows protesters chanting, “Xi Jinping, get out! CCP (Chinese Communist Party, editor’s note), come out!” .

The police dispersed the protesters in the morning, but hundreds of people gathered at the same place in the afternoon, an eyewitness told AFP.

He said protesters with blank sheets of paper symbolizing censorship and white flowers stood silently at several intersections, he said on condition of anonymity.

Videos posted on social media in the area, which appear to have been filmed in the late afternoon, show the crowd chanting slogans.

Footage taken from various angles shows a man with a bouquet of yellow flowers in his hand being dragged towards a police car as spectators scream.

– Hundreds of protesters in Wuhan –

In the evening, dozens of police officers in yellow vests formed a dense line, cordoning off the streets where the demonstrations were taking place.

Their colleagues asked people to leave the place, but some still gathered together, and AFP witnessed the arrest of several people.

Live on Instagram, footage showed law enforcement approaching the group from both sides of the street and forcing them back onto the sidewalks.

“It looks like the police are looking for people suspected of leading the protests,” said the foreigner, who requested anonymity.

“The atmosphere was very tense, but there was also excitement and energy … The demonstrators directed their anger at the police and the (communist) party, repeating the refrain ‘Get you out!’ last days.”

On Sunday evening, between 300 and 400 people gathered for several hours on the banks of a river in Beijing, some shouting, “We are all people from Xinjiang! Come on, Chinese!” 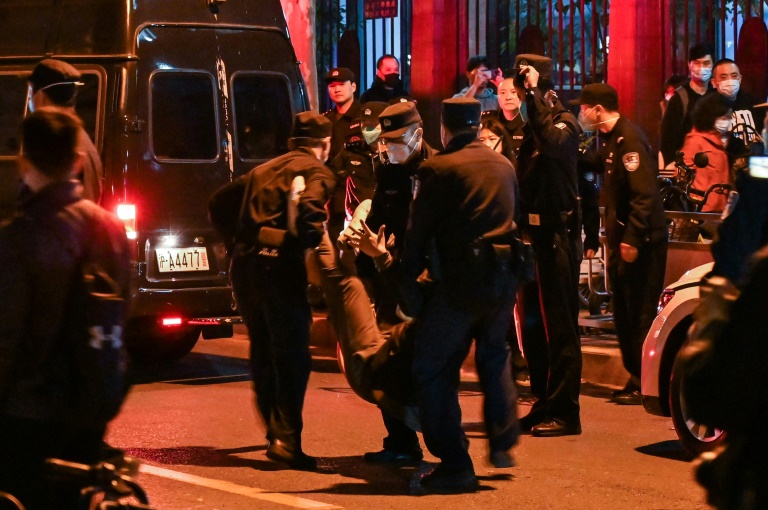 Protesters sang the national anthem and listened to speeches as police cars lined up across the river.

Hundreds of people also marched through the streets of Wuhan, in central China, against health restrictions, nearly three years after the city’s first-ever Covid-19 case was detected, according to the video. networks and geolocation AFP.

– Unrest in the universities –

Between 200 and 300 students from the prestigious Tsinghua Metropolitan University also protested on their campus that day, said a witness interviewed by AFP.

He said that around 11:30 am (03:30 GMT) the student started by waving a piece of white paper and was joined by other women.

“We sang the national anthem and the Internationale and chanted: +freedom prevails+, +no PCR tests, we want food+, +no conclusions, we want freedom+,” the witness said again.

On the Internet, the video shows a crowd outside the university cafeteria, gathered around the speaker, who shouted: “This is not a normal life, we have had enough. There was no life like this before!

Another video of students shouting “democracy and the rule of law, freedom of speech” was quickly removed from the Internet.

A vigil for the victims of the Urumqi fire was also held on Saturday night at Peking University, a neighbor of Tsinghua University.

According to a student involved, protesters began gathering around midnight Saturday night on campus and the crowd reached 100 to 200 people.

“I heard people shouting + no to Covid tests, yes to freedom +!” he stressed, providing AFP with photos and video confirming his statements.

Social media videos also showed mass pickets at the Nanjing Institute of Communications (east), as well as smaller gatherings in Xi’an (center) and Guangzhou (south), but the authenticity of these images could not be verified by AFP. .

The hashtags associated with these events have been censored on the Weibo platform, and sensitive videos have been removed from the sharing websites Duoyin and Kuaishou.

Sporadic and sometimes violent protests have already taken place in China in recent days, especially at the world’s largest iPhone factory located in Zhengzhou (center), as well as in Urumqi after the disaster.

On Sunday, 39,506 cases of Covid were reported in China, a daily record, but the figure remains very low compared to those reported elsewhere in the world at the height of the pandemic.