As we have seen again this summer, weather conditions are becoming more and more extreme in some regions of the world. Scientists have been warning about the effects of climate change for years, but they say leaders and businesses are not acting fast enough. The world is moving in the wrong direction and the effects of climate change will be increasingly devastating, according to a new report from the United in Science team.

The report, released September 13, lists greenhouse gas concentrations, global temperature evolutions and various climate “tipping points”. The conclusions are disappointing: harmful emissions from fossil fuels continue to grow and have already exceeded pre-pandemic levels. In terms of temperature, the past seven years have been the hottest on record.

“There is a 48 percent chance that for at least one year over the next five years, the average annual temperature will be temporarily 1.5°C above the 1850-1900 average,” the World Meteorological Organization (WMO) said in a statement. The gap between climate targets and reality is huge, and experts fear tragic physical and socio-economic consequences. For WMO, there is now an urgent need to step up measures regarding early warning systems to protect the most vulnerable populations.

Heat waves, droughts and fires in Europe, China and the USA, floods in Pakistan… This summer was only a harbinger of weather patterns that will become more frequent and even more frequent, even ordinary in the future. “The new scale of these disasters is not natural. This is the price of humanity’s dependence on fossil fuels,” said UN Secretary-General António Guterres. We are heading straight for “uncharted territories of destruction,” he says.

It is now known that extreme weather events are becoming more intense and frequent due to human activities and their impact on the climate. But despite warnings, despite recent climate events, the message does not seem to be fully understood and efforts to mitigate emissions are not enough. Atmospheric levels of carbon dioxide, methane and nitrous oxide continue to rise (and this despite a temporary decrease in gas emissions during the COVID-19 pandemic). The data even shows that global CO2 emissions from January to May 2022 are 1.2% higher than in 2019 over the same period! The invasion of Ukraine and rising gas prices have unfortunately forced some governments to turn back to fossil fuels.

Evolution of fossil fuel CO2 emissions from 1900 to the present. © World Meteorological Organization

The report highlights that the 2030 greenhouse gas reduction commitment target must be four times higher to limit warming to +2°C, and seven times higher to meet the +1.5°C target set by the Paris Agreement . In this regard, experts note that this goal refers to long-term warming: considered separately, years above 1.5 ° C should occur “with increasing regularity.”

Estimates confirm this: the global mean annual temperature near the surface for each year from 2022 to 2026 is projected to be 1.1 to 1.7°C above pre-industrial levels. A small consolation: there is only a small chance (10%) that the five-year average will exceed the +1.5°C threshold. However, this average temperature is likely to be higher than the average for the previous five years (2017-2021).

Experts predict that if governments maintain their current environmental policies, global warming in the 21st century will be between 2.3 and 3.3°C. Cities, home to 55% of the world’s population, will bear the brunt of the impact: by the 2050s, more than 1.6 billion people living in more than 970 cities worldwide will be regularly exposed, and three-monthly average temperatures will reach at least 35°C, the report says. 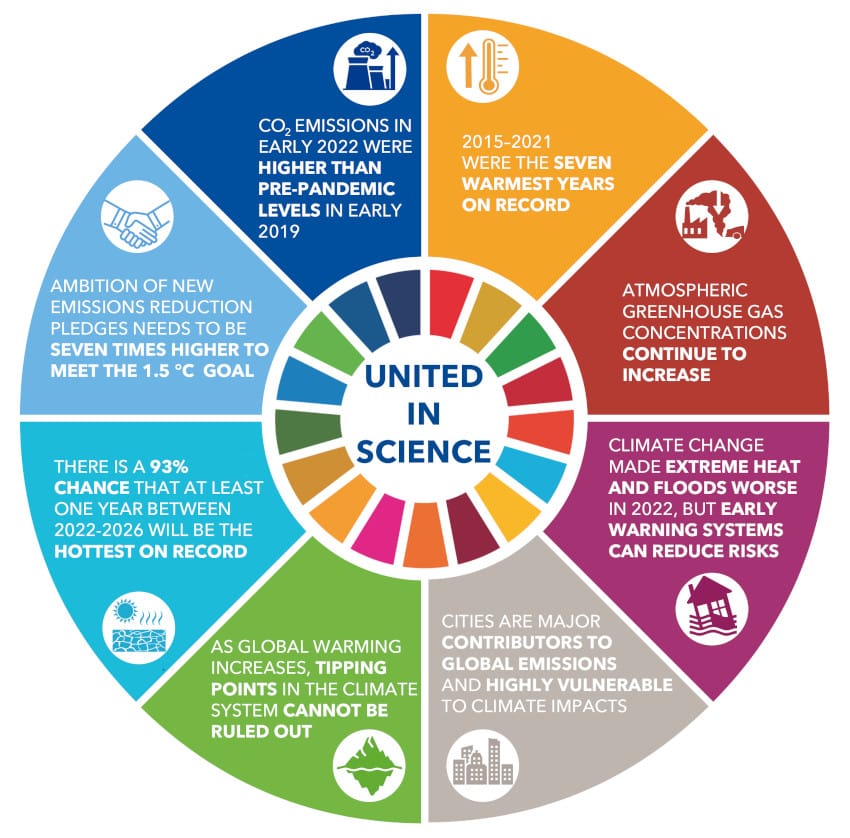 Infographic summarizing the results of the United in Science 2022 report. © World Meteorological Organization

This is what India and Pakistan have suffered this year, between March and May. In some cities, temperatures reached or approached 50°C. This exceptionally intense and early heatwave resulted in 90 deaths and caused power outages and water shortages for millions of residents. Since 2010, the heat wave has claimed the lives of more than 6,500 people in India, according to France Info. China also experienced a prolonged heat wave in the summer, which was not without consequences. The difference is that in India, most of the population lives in low-income areas and is therefore even more vulnerable to extreme temperatures.

Coastal cities are particularly threatened by climate change and will have to deal with increasingly frequent and extensive flooding due to rising sea levels. billion people,” the report concludes.

Climate tipping points are now under scrutiny, and each of them can lead to dramatic consequences at the global level. The melting of the polar ice caps, and in particular the drying up of the Amazon rainforest, are of great concern because of the cascading global effects that these events entail. The number of natural disasters related to weather, climate and water has increased fivefold over the past 50 years, causing $202 million in damage every day.

If greenhouse gas emissions cannot be reduced, it will be necessary to adapt to climate change and the extreme events it will cause. Experts are now calling on world leaders to create early warning systems for multiple risks that can save lives and limit property damage. It turns out that they are in less than half the countries of the world: Africa, small island states and developing countries do not have these systems at all.

“One of the main international priorities is to ensure the protection of every person on the planet,” experts emphasize. Substantial financial assistance from the wealthiest countries responsible for most CO2 emissions is highly welcome and expected to support the most vulnerable developing countries. COP27, to be held in November in Egypt, will provide an opportunity to define new action plans to deal with this climate emergency.