The time for change has come for the National Digital Council (CNNum), which has set itself the new mission of questioning our relationship to digital. Françoise Mercadal-Delasalles, Managing Director at Groupe Crédit du Nord, and Gilles Babinet, multi-entrepreneur, succeed Salwa Toko, as Chairman of the Board for the next two years.

A new position summarized by Gilles Babinet in these terms: “Take digital technology as a fact of society, and no longer a technical subject”. This strategic shift is desired by the government, which sees the new CNNum as an antidote to “technological solutionism”, a term repeated over and over again during the press conference held on Thursday.

Philosophers, sociologists, physchologists, anthropologists, economists, business leaders or even scientists and computer scientists now make up the council, which has tightened its ranks (17 members instead of 30, and 4 parliamentarians).

Open the debate in civil society

Among the nominated personalities, members with a technical and academic profile such as Gilles Dowek, computer scientist and logician, researcher at Inria, will rub shoulders with more atypical personalities, such as Alexandre Lacroix, writer and editorial director of Philosophy magazine, who, with regard to digital technology, notably published What connects us. How far will the internet change our lives? (Allary editions, 2018). 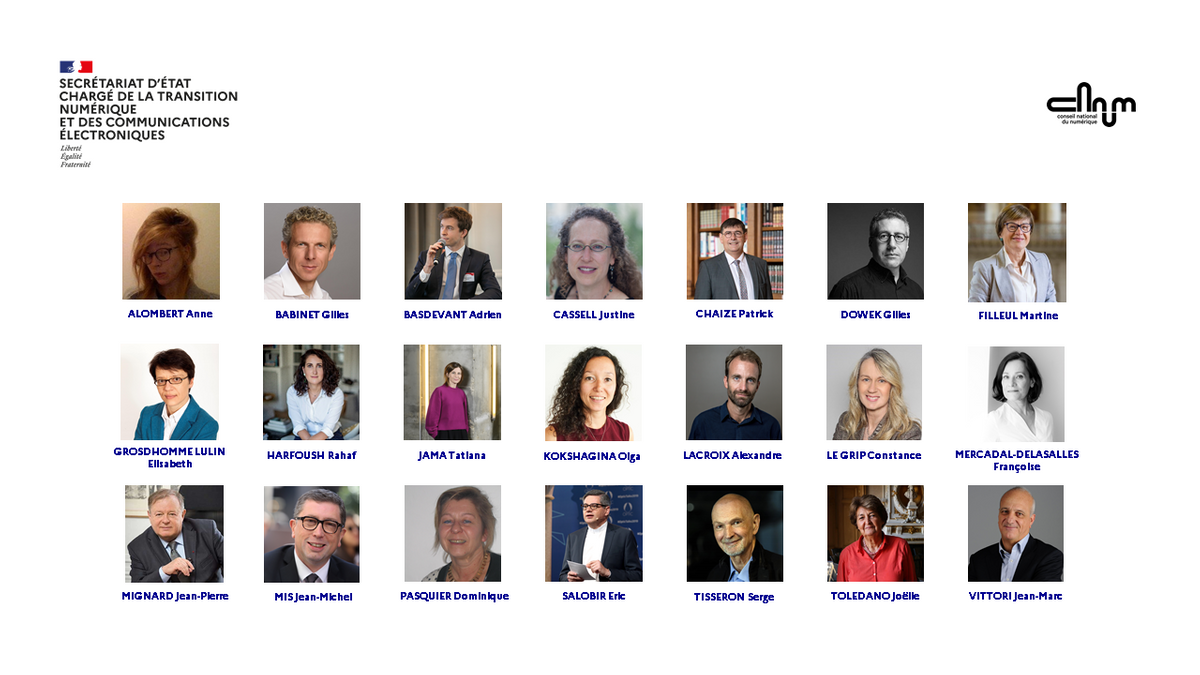 “We are in an infernal race to continue to exist, in this technological transition, and therefore also economic. (…) This discrepancy between the speed of transformation of this technology and our capacity to understand it, to digest it, can create discomfort and fractures ”declared Françoise Mercadal-Delasalles.

This new CNNum will therefore try to open the debate, and bring it into society. “It will be less a question of producing an expert’s speech, but of bringing out a collective thought” examines the co-president.

For Gilles Babinet, it is a “daring and demanding bet. We have a phase of technological acceleration which is quite spectacular ”notes the latter. “If we manage to bring out a clear idea, well this idea can be transcribed into reality” notes the entrepreneur, who, paraphrasing Victor Hugo, notes that “nothing is stronger than an idea whose hour has come ”.

If the future CNNum projects are not yet on the agenda, this is a methodological challenge that will be faced by this council, created in 2011 with the aim of shedding light on the conduct of public policies on digital issues, at a time when digital technology had to be placed on the agenda of decision makers.

The previous term of office raised digital and societal issues during the health crisis, giving rise in particular to debates on the Tousanticovid application, online hatred or even the environmental roadmap, which can also be found in its 2018 report. -2020.

Asked about the central issue of health, CNNum representatives still recognized that this subject will have a central place in the debates to come. The place of care and the role of digital technology associated with this theme will be treated “from a different, less technical angle,” said Françoise Mercadal-Delasalles.

The new mission of the council will consist initially in “formalizing the problems relating to digital” to share the elements useful for the thought and the public decision, both at the national and European level ”.

A “technological solutionism” which is “no longer up to the task”, according to Cédric O

On paper, the CNNum partly offloads the players in the digital economy and the startup ecosystem, even if they are not completely excluded. “Between the ferus of any technological determinism and the rejection of any blissful technosolutionism, it is with a lucid but positive, voluntary and open outlook that we will share our visions of the digital” considers Gilles Babinet.

Cédric O took the floor to defend the mission letter of the new CNNum, which takes a more academic turn. “I do not think that the actors of the digital economy and French startups consider that they lack areas of exchange with this government. There are obviously a lot of exchanges. The question that is asked through this new council is no longer the same question that was asked in the past: the subject is not to have the opinion of startups on what the government is doing. The subject is to rethink in a multidisciplinary way the transformation of society. The need to have people who think digitally ”declared the Minister.

“We have been conducting a reflection within the government for several weeks on the history and development of CNNum. It was created several years ago, at the time as an agitator within the government, to spur the transformation of the state, to deal with extremely concrete subjects. This subject is a little behind us. “

Today, “digital is everywhere”, insists Cédric O. “I think there is a problem of thought. The political debate tends to break down the subject, ”he continues, referring to a“ technological solutionism ”which is no longer up to“ rethinking the more complex and general upheaval represented by the digital transformation ”.

Facebook plans to create 10,000 jobs in Europe to build the “metaverse”

Facebook plans to create 10,000 jobs in Europe to build the “metaverse”