Every vampire needs a coffin to rest in, and in V Rising he finds himself in the heart of a castle animated by his own life: it serves as a framework for housing, allows him to manage his resources or accept NPCs, whether he agrees or not.

As we know, V Rising puts the player in the shoes of a thirsty vampire who must feed and survive in a hostile environment. Gradually, this young vampire, however, will also have a calling to grow, perhaps to become the head of a vampire clan and, in particular, to lay the foundation of the castle that will dominate the land of Farbane – in addition to protecting our vampire’s coffin, serving as an anchor point. In a new post published on the developer’s official blog, Stunlock explains the role of this lock.

We mostly remember that V Rising castles are magical entities endowed with (not) almost autonomous life. At the heart of the castle lies the “heart of the castle”, which breathes its magic into it: it will need to be regularly fed with blood, but a “well-fed” castle will be able to provide many services. Starting with the game mechanics of crafting, since the workshops created in the castle are powered by magic and are powered by the heart of the castle – in other words, the creation of items occurs automatically, as long as the heart of the castle is sufficiently supplied and that the workshops have the necessary raw materials.
It is also the heart of the castle, providing its main defense: a well-powered castle has particularly strong defenses (destroying a wall or door would be a costly and time-consuming undertaking) and is able to gradually regenerate itself over time. An important asset to protect his wealth and ensure that he is not plundered by a sloppy passage. Conversely, a castle in poor condition will fall into disrepair, or even be able to be conquered by another vampire who can appropriate it and benefit from the achievements of their predecessor. 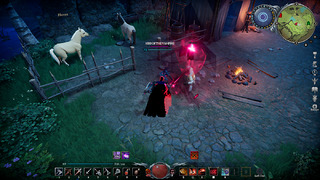 The castle can also be populated gradually. As we know, vampires will be able to capture mortals and keep them in the castle’s prisons to make a kind of living pantry (to feed on their blood regularly). Note here that a vampire can also try to seduce NPCs into coming and willingly stay in the castle, or even bite them so they become vampires in turn. There are so many “human forces” that can contribute to the functioning of the castle or that we can direct to collect resources, for example – a vampire worthy of the name will clearly prefer to send his minions to do the dirty work.

V Rising’s castles are implied to be based both on housing mechanics (they can be customized to the player’s liking) and management mechanics as part of resource optimization and clan NPCs, or his craftsmanship through castle workshops. So many items that we will be able to open specifically in the near future, as part of early access to V Rising from May 17th.