KOROMON is the perfect Pokemon clone?

A lonely young hero leaves his mother and goes on an adventure to become the best trainer and save the region and the creatures from a secret and dangerous faction… Gone! This isn’t a brand new scenario for the next Pokémon, but rather that of Coromon, an independent game developed by TRAGsoft, a small team from the Netherlands heavily inspired by Pokémon. A double in terms of the field, but also in terms of your adventure, at least in terms of appearance, with a choice between three famous monsters, the capture of creatures that must be unearthed in nature, and the combat system between them to increase level them up and defeat the enemy.

The perfect clone, which is a faithful adaptation of Pokémon, allowing any player familiar with the Japanese saga to go on an adventure without getting lost, and thus easily find their way around. Only a few names change, although the principle remains the same. Here, the creatures are koromon, the famous round Pokeballs are cylindrical spinners, and, above all, we quickly realize that trainer duels, so important and even sometimes annoying in Pokemon, are almost optional here, they can be avoided many times over. to have utility in those moments just to be stronger for the next fights.


But if at the moment the inspiration is so strong that the differences are only in the name change, the almost similar story is still hard to hide. Because even though the game mechanics are still groundbreaking with the introduction of two experience bars, one for increasing stats called EV and the other for leveling up, we end up trying to abandon the narrative structure in order to explore different locations. in the region. Unsuccessfully. Few things to explore, places dedicated to history, and nothing but history, which can sometimes frustrate us when we get a little carried away with the desire to explore the surroundings. The map can be a bit small for people for whom Pokemon adventures are primarily a new world to explore.

I will do my best to become a winner!

In Coromon, the game mechanics are not surprising at all, whether you are a beginner or a veteran of the Pokémon license. On your specific mission to collect the essence of the six Titans that inhabit the region in the world of Velua, the story, which is really hard to wind up, remains the same in points as in the game of the famous Japanese series, although Koromon offers some twists and changes. However, for the most part, while there may be some pretty inventive changes, we can’t really feel much surprise in the story or in the mechanics. A Pokémon-like that followed its writing inspiration. An exemplary student, one might say.

But if Coromon is trying to be a shadow of POKÉMON, the few changes made are pretty refreshing. Type matching takes center stage in the battles here, where there are seven different types of koromon in the wild, as well as six that are limited to attack types, each with their own strengths and weaknesses. Pokemon regulars, forget about dual-type creatures! Koromon has only one. This makes it much easier to determine which attack to use against the enemy. The addition of an easily accessible type table to the game menu, even during combat, is particularly useful for newcomers and veterans alike.

Unfortunately, these modifications, which may be positive for the unaccustomed, are less important for the veterans, whose game may seem too simplistic. But this simplification also means that the six coronamon that make up your team cannot cover all types, forcing you to do a lot of capture and, above all, a lot of training so that some reserve creatures can one day fight the boss thanks to their types. This time spent capturing and training helper koromons, especially in the first hours of the game, interferes with the normal development of the plot, which is a real shame; but that’s just the result of a lot of difficulty balance issues hindering progression without offering anything interesting, forcing you to spend hours training his monsters, going back and forth to Koromon’s Healing Center before starting the same cycle over and over again. . Nothing funny. Indeed, but then really nothing fun.

And win all the tests!

However, the game does have advanced game modes similar to the Nazlok mechanics that Pokémon fans looking for a challenge will greatly appreciate. These difficulty settings enforce self-imposed rules, for example, on the hardest mode, only catch one coronamon in each area and release them into the wild if they pass out in combat. This adds complexity, which is welcome, and above all, it adds hours of play after the end of normal mode. A way to please all the fans in a pretty clever way and replicate the Pokemon challenge experience as best as possible.

But this love for the Japanese series is a big part of what keeps Koromon from feeling like a soulless clone with no aspirations for anything more. The immense love we feel, especially in the emoji graphics above the characters during the dialogue scenes, to better characterize the emotions they may be feeling at the moment. A character with a lot of customization options, which is more of a nice surprise, but also the love that comes through in the design of the creatures you meet, with custom shouts that will go off when they arrive on the battlefield. 114 different crowns, each very different from each other. 114 crowns with bright colors and a variety of screams. The 114 koromon are much smaller than what was offered in the original red and blue Pokémon, but this deficiency is nevertheless made up for by a mechanism heavily inspired by Shiny Pokémon, allowing for the existence of three variants. They can be classified from Standard to Powerful, to finally finish with the Perfect Coronomon. The latter is recognizable by a color different from the usual one. Ratings are entirely dependent on luck, which can be a way to turn the battlefield upside down or add some excitement during long traps and practice games. A bit of excitement, which we can admit is very welcome after long hours of trying to level up your creatures. 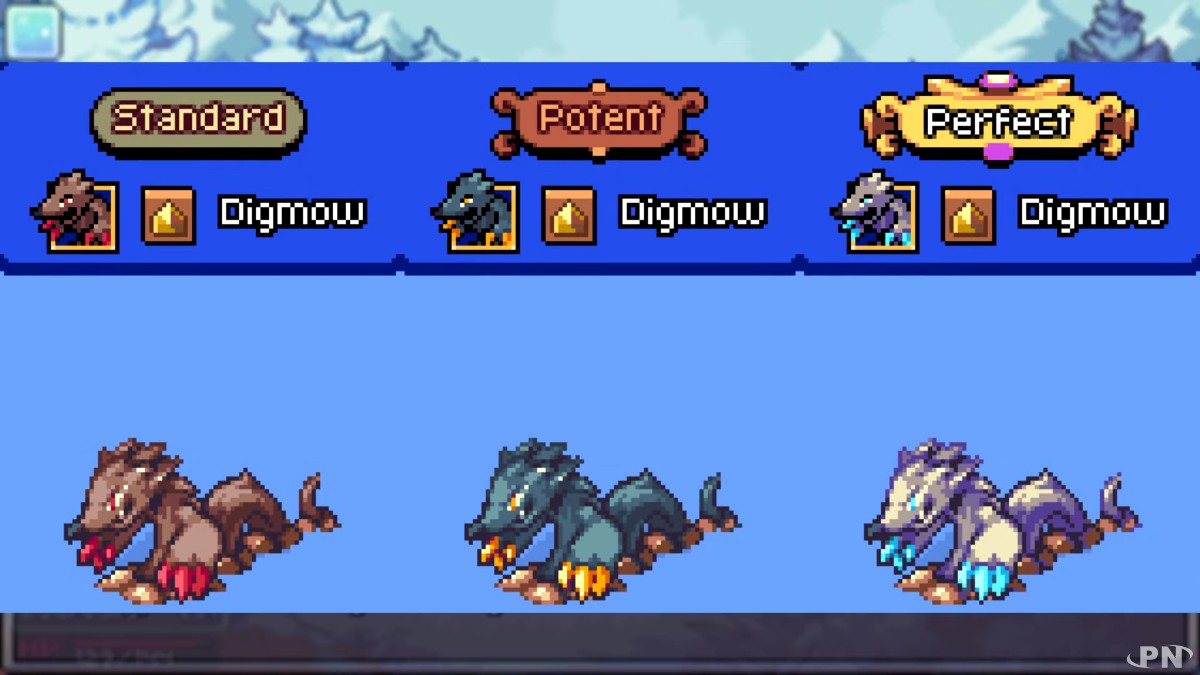