– England lifts the mask, not without fears –

England lifted most of the restrictions linked to the pandemic on Monday, a step that worries scientists and politicians as the United Kingdom has more than 128,700 dead.

Prime Minister Boris Johnson and his finance minister, contact case, are watching a period of isolation, while the health minister tested positive on Saturday.

The vaccination program will be extended to vulnerable young people aged 12 to 15.

The government wants to introduce in September a health pass proving a complete vaccination at the entrance of establishments welcoming a large public, such as discos.

According to the organizers of the Tokyo Olympics, 58 cases of Covid-19 have been detected since July 1, out of nearly 20,000 people (athletes, supervisors, journalists) who have arrived in the country.

Checking the temperature of a man wishing to enter the press center for the 2020 Olympic Games in Tokyo on July 9, 2021 (AFP – Behrouz MEHRI)

Due to a lack of spectators, no official from Toyota, sponsor of the Tokyo Olympics, will attend the opening ceremony on Friday, and the Japanese group will not broadcast any advertisements related to the event.

Zach LaVine, back of the United States basketball team, was placed in solitary confinement in the United States on Monday “out of caution” and did not fly to Tokyo. Isolation also of all the Mexican selection of baseball after the positive tests of the pitchers Hector Velazquez and Sammy Solis, departure for Tokyo maintained on Wednesday.

Ireland has joined the European health certificate system in force since July 1 by abandoning the quarantine requirement for passengers arriving from the 26 other countries of the European Union, as well as from the United Kingdom, Iceland , Liechtenstein, Norway and Switzerland, if they are fully vaccinated, recovered from the coronavirus or have tested negative within 72 hours.

Iceland, one of the first countries in the world to have lifted its health checks for vaccinated travelers, will reinstate the requirement for a negative test due to an increase in contamination.

– Vaccination for all adults in Tunisia –

The anticoronavirus vaccination will be open to all adults in Tunisia on Tuesday and Wednesday, religious holidays. This country with until recently limited vaccine stocks has only fully immunized about 8% of its population, a rate that remains among the highest in Africa.

The Mauritanian government has banned the great collective prayer of the Muslim holiday of Eid, scheduled for Wednesday in Mauritania, and reinforced the night curfew to stem the spread of the epidemic.

– The Delta variant weighs down the markets –

With losses ranging between 2% and more than 3%, the European and American equity markets suffered the blow on Monday, abandoned by investors worried about the resurgence of Covid-19 cases and having preferred to find refuge in the bond market.

Faced with “a virus that contaminates at lightning speed” in France, the government on Monday adopted a bill including the obligation to vaccinate caregivers and extending the health pass to restaurants, trains and shopping centers.

Canada will reopen its land border on August 9 to vaccinated Americans and US residents and all of its borders on September 7 to vaccinated travelers from around the world.

Administrations and banks will close for six days in Tehran and in a neighboring province, in order to slow the progression of the Covid-19. This is the first time since the start of the pandemic that such a measure has been taken in the country.

The pandemic has killed at least 4,093,263 people around the world since the end of December 2019, according to a report established by AFP from official sources on Monday at 10:00 GMT. 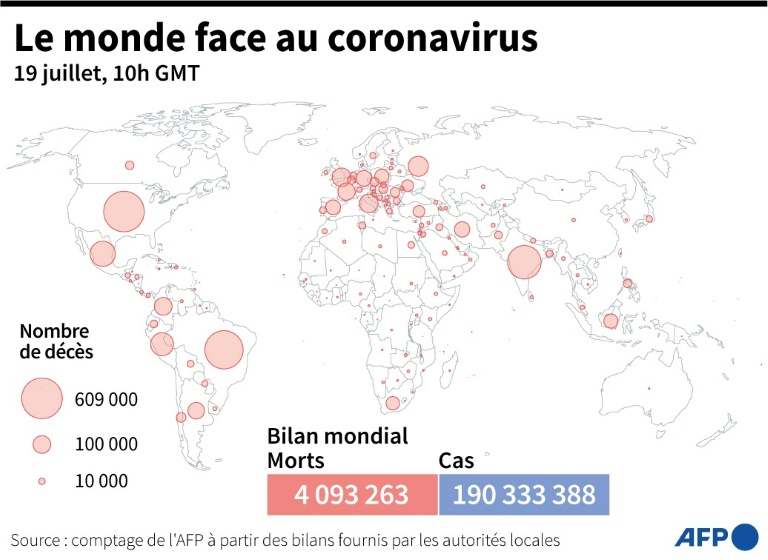 The WHO estimates, taking into account the excess mortality directly and indirectly linked to Covid-19, that the results of the pandemic could be two to three times higher than that officially recorded.