Beijing announced on Wednesday a tightening of restrictions on foreign travel for its nationals, as China faces a resumption of the Covid-19 epidemic on its soil.

The country will temporarily “stop issuing passports and other documents” necessary for travel abroad “unless there is a compelling reason,” said one of the officials of the immigration office, Liu Haitao.

Since the discovery last month in Nanjing (east) of new cases of Covid-19, this focus has quickly spread and now affects 18 provinces.

The Delta variant in the world (AFP – Erin CONROY)

Macau has ordered all of its residents tested after a family of four tested positive for the Delta variant, ending 16 consecutive months without any cases in the Chinese city.

The authorities want to test all of the city’s 680,000 inhabitants in three days, the government announced.

An expanded curfew came into effect Tuesday evening in Morocco, as well as travel restrictions, in order to stem the current outbreak of coronavirus contaminations.

The nighttime curfew is now in effect from 9:00 p.m. to 5:00 a.m. (8:00 p.m. to 4:00 a.m. GMT). The authorities have also decided to restrict travel to and from the megalopolis of Casablanca (west), as well as to and from the two major tourist cities of Marrakech and Agadir (south), with the exception of people with a vaccination passport or traveling for professional or medical reasons.

– France: “white plan” for hospitals in the South East –

After Corsica, the “white plan” was activated on Wednesday in hospitals in Provence-Alpes-Côte-d’Azur, in the south-east of France, to allow healthcare establishments to cope with a significant increase in healthcare costs. hospitalizations.

In one week, “and in the midst of a period of leave for caregivers as well as for vacationers” in this region, “hospitalizations for Covid have increased by 56%”, the Regional Health Agency told AFP.

The “white plan” allows “to have a legislative framework to recall caregivers on leave or to deprogram operations”, according to the Public Assistance of Marseille Hospitals (AP-HM).

– Vaccinated people are 3 times less likely to be positive – 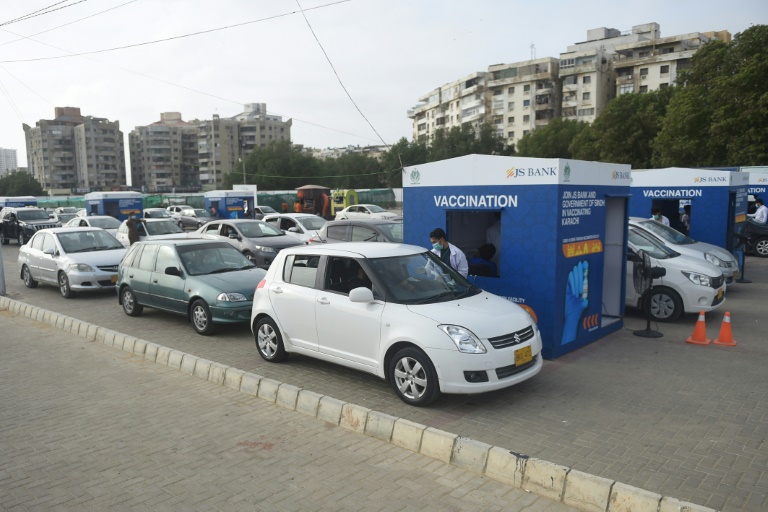 Pakistanis are injected with the Sinopharm vaccine against Covid-19, in Karachi (Pakistan) on August 3, 2021 (AFP – Rizwan TABASSUM)

Fully vaccinated people are three times less likely to test positive for Covid-19 than those who are not vaccinated, according to the latest results released Wednesday from a large study in England.

The results of this study, carried out by Imperial College London and Ipsos MORI on more than 98,000 volunteers between June 24 and July 12, also show that fully vaccinated people are less likely to transmit the virus.

The pandemic has killed at least 4.24 million people worldwide since the end of December 2019, according to a report established by AFP on Wednesday at 10:00 GMT.

The World Health Organization (WHO) estimates, taking into account the excess mortality directly and indirectly linked to Covid-19, that the toll of the pandemic could be two to three times higher than that which is officially established.

“Once you know” by Emmanuel Cappellin – Sciences et Avenir

Alzheimer’s disease: better and better understood the role of our genes

Lunar target in the Marie-Gouyen lobby

“Once you know” by Emmanuel Cappellin – Sciences et Avenir

Alzheimer’s disease: better and better understood the role of our genes

Lunar target in the Marie-Gouyen lobby