– Rolled by Covid, Bulgaria called to the polls –

Bulgarians vote on Sunday for the third legislative elections of the year, amid the fourth wave of Covid-19 in this country that is the least vaccinated in the European Union.

Hospitals are overwhelmed and nearly 200 people die from the coronavirus every day, while less than a quarter of the 6.9 million residents are fully vaccinated.

Three Covid patients died overnight from Saturday to Sunday in a hospital fire in Sliven (southeast). The country’s hospitals, often poorly maintained, are currently overwhelmed by the influx of coronavirus patients.

Morocco, an important tourist country, has decided to strengthen border controls due to the increase in cases of contamination by Covid-19 in Europe.

In addition to the mandatory health pass and negative PCR tests, a double check will be carried out on arrival in Morocco, using thermal cameras and electronic thermometers, as well as antigenic tests.

These measures affect all persons from the so-called “list B” countries, namely France, several EU countries, as well as the UK, Algeria and Tunisia.

Dutch police said they had arrested 15 people on Saturday night in Leeuwarden, a city in northern Holland, after clashes with hundreds of people unhappy with the early closure of bars.

Dutch Prime Minister Mark Rutte announced on Friday the reintroduction of partial containment with a series of sanitary restrictions, to deal with a record number of Covid-19 cases. Bars and restaurants must now close at 8:00 pm (7:00 pm GMT).

Several thousand people demonstrated in Geneva on Saturday against the anti-Covid measures implemented by the federal government and to say no to a law that frames anti-Covid measures, which will be put to a referendum on November 28.

In early November, an opinion poll gave the winner of the “yes” 69% for this vote.

Swiss authorities are trying to mobilize in favor of vaccination while the country has a lower vaccination coverage rate than its neighbors (64.6% of the population fully vaccinated on November 10).

Air traffic was disrupted on Saturday at the international airport on the French island of Guadeloupe by protesters against the health pass who blocked access.

Several hundred protesters, with firefighters in the front line, according to local media, had mobilized on the access road to the airport, while the tourist season begins in Guadeloupe.

The pandemic has killed nearly 5.1 million people worldwide since the WHO China office reported the onset of the disease in late December 2019, according to a report calculated on Sunday around 11:00 a.m. GMT by AFP from official sources. 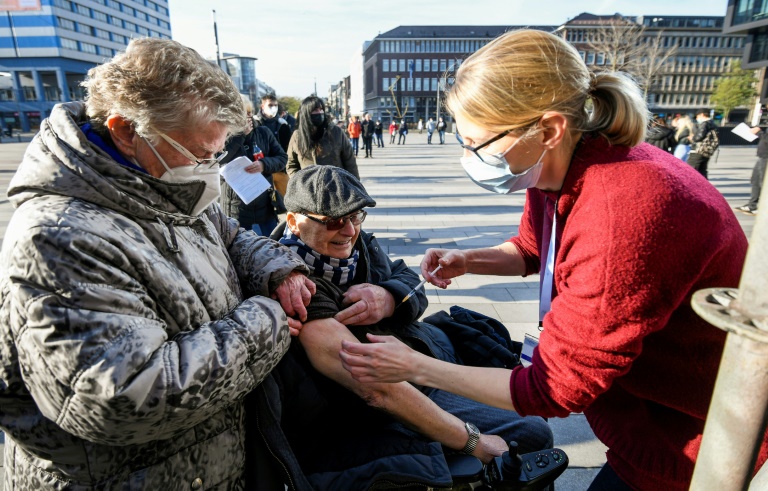 A man in a wheelchair is vaccinated against Covid in front of a mobile vaccination center in Duisburg, Germany, on November 12, 2021 (AFP – Ina FASSBENDER)

The World Health Organization (WHO) estimates, taking into account the excess mortality directly and indirectly linked to Covid-19, that the number of victims of the pandemic could be two to three times higher than officially established.