– No deaths related to Omicron yet –

The World Health Organization has not been informed at this stage of a death linked to the new Omicron variant, according to a spokesman for the organization in Geneva.

Classified as worrisome by the WHO, this variant was first detected in southern Africa. Since South African health officials alerted the WHO on November 24, Omicron infections have been reported in at least 38 countries around the world.

The first cases of local transmission of the Omicron variant have been reported in the United States and Australia.

The International Monetary Fund (IMF) plans to revise its global growth forecasts downwards due to the new Omicron variant that is spreading around the world, the managing director of the institution said on Friday.

The IMF already revised its forecasts for world gross domestic product growth in October to 5.9% in 2021 compared to 6% in July, due to logistical problems and uneven vaccination.

More than half of the roughly 120 participants at a party in Oslo last week, all vaccinated, tested positive for Covid-19. The Omicron variant had been confirmed Friday night in thirteen cases and was deemed likely in others.

One of the participants had recently returned from South Africa.

“We must take steps to reduce the pressure on hospitals as quickly as possible,” which is “unsustainable,” he said, announcing a tightening of restrictions on Saturday.

The Irish government announced on Friday the implementation of new restrictions from December 7 to January 9, including the closure of nightclubs and physical distancing in certain places, in a bid to limit Covid-19 contamination and prevent the spread of the new Omicron variant.

Professor Didier Raoult was sanctioned in Bordeaux with a “reprimand” from his colleagues for having violated the code of medical ethics by promoting hydroxychloroquine against Covid-19, despite the lack of proven effect.

Greek health authorities have announced that the Covid-19 booster vaccine will now be given to adults as early as three months after the second injection to combat the resurgence of the virus.

In Canada, health authorities on Friday recommended giving a booster dose of the vaccine to people over 18 years of age if they are at risk. They “strongly” suggested a booster dose over 50 years.

– France: vaccination of children at risk –

In France, vaccination will be open “in mid-December” to children aged 5 to 11 years at risk of developing severe forms, and probably to other children in January in a “progressive and optional” manner, announced the Minister of Health. Olivier Véran.

In addition, the health authorities have identified twelve cases of Omicron infection in France. 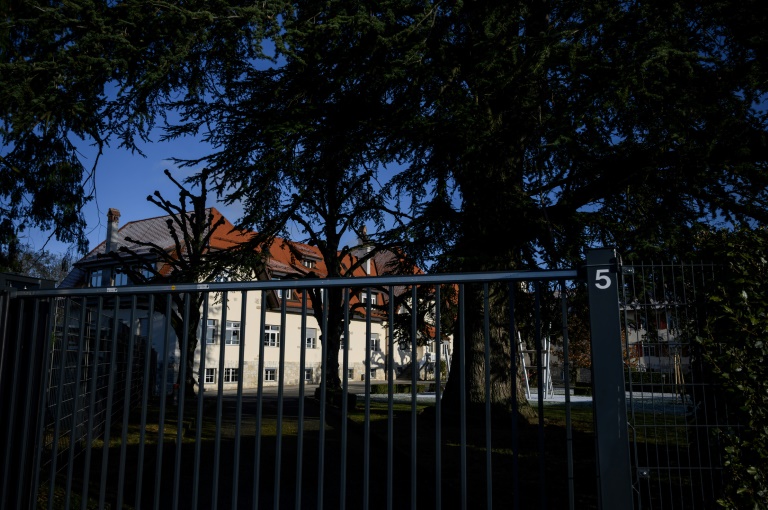 A school in Switzerland closed after the discovery of two cases of infection by the Omicron variant, on December 3, 2021 in Founex (AFP – Fabrice COFFRINI)

Switzerland abolishes the quarantine requirement for vaccinated people on Saturday, but tightens testing requirements. In addition to a negative PCR test prior to admission, they will need to perform a second test – PCR or antigen – between the fourth and seventh day after arrival.

Two hippos from the Antwerp Zoo (northern Belgium) have tested positive for Covid-19, announced the animal park, which sees it as a world first for this species.

The pandemic has killed at least 5,233,111 people worldwide since the end of 2019, according to a report prepared this Friday at noon by AFP from official sources.