The American laboratory Merck plans to shortly apply to the United States for authorization to market a pill that, according to a clinical trial, reduces by half the risks of hospitalization and death of patients with Covid-19.

If approved, this drug called molnupiravir would represent a breakthrough in the fight against the pandemic by making it possible to reduce severe forms of the disease quite easily. The United States plans to buy 1.7 million doses.

350 protesters in Rennes (west) under heavy rain, 800 in Pau (southwest) disrupting train traffic in the morning … Several thousand people demonstrated again on Saturday across France to protest against the health pass imposed by the government to counter the epidemic.

With tricolor flags, several thousand people demonstrated in Bucharest on Saturday, at the call of the extreme right, against “mandatory vaccination”, while Romania recorded a new daily record of Covid-19 cases.

“Freedom” and “Stop forced vaccination” chanted the protesters, gathered in front of the government headquarters and surrounded by a large police force.

– California: Immunization Will Soon Be Mandatory For All Students –

All California students eligible for the Covid-19 vaccine will need to be vaccinated if they wish to physically attend classes, whether they are in school in the public or private system, the US state governor announced.

This decision is unprecedented on such a scale in the United States, a country that surpassed the threshold of 700,000 deaths from coronavirus on Friday, a world record.

The vaccination requirement, which will ultimately affect more than six million students in California, will not go into effect until next year, depending on the age groups for which the US pharmaceutical agency, the FDA, will have fully validated the vaccine.

– In Berlin, the temple of techno reopens its doors –

The Berghain, Berlin’s temple of night and techno, reopens its doors on Saturday after about 19 months of closure due to the pandemic.

You need an anti-Covid vaccine or proof of a recent cure to pass through the doors of this club, located in an old disused headquarters in the center of the German capital and famous for its long lines.

– Nicaragua: green light for emergency use of two Cuban vaccines –

Nicaragua, which faces a sharp increase in coronavirus cases, approved this Saturday the emergency use of the two antiviral vaccines developed by Cuba, Abdala and Soberana 02, the public company BioCubaFarma announced on Twitter.

Guadeloupe will begin its first phase of misconception on October 8 due to a “decrease in the indicators of the epidemic for almost 6 consecutive weeks,” announced the prefect of the French island in the West Indies. 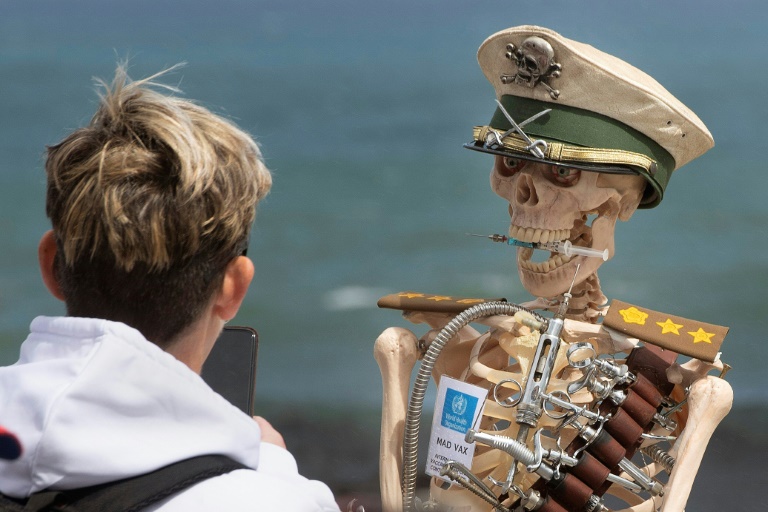 More than 700,000 people have succumbed to Covid-19 in the United States since the pandemic began, according to the Johns Hopkins University tally, the equivalent of the population of the capital, Washington.

This grim course serves as a reminder that hundreds of Americans continue to die from coronavirus every day, despite the vaccination campaign launched in December, but which has since slowed dramatically.

The pandemic has killed at least 4,780,108 people worldwide since the end of December 2019, according to an assessment established by AFP from official sources on Friday in the middle of the day.

The World Health Organization (WHO) estimates, taking into account the excess mortality directly and indirectly related to Covid-19, that the number of victims of the pandemic could be two or three times higher.