– The milestone of 100,000 daily cases crossed in France, a new record

France crossed the threshold of 100,000 new Covid-19 cases in 24 hours on Saturday, Christmas Day, unprecedented, while the government must reassess the situation on Monday.

With 104,611 new cases in 24 hours, the country has reached an unprecedented threshold since the start of the epidemic in March 2020, according to figures released Saturday night by the French public health agency. The 50,000 mark was surpassed on December 4 and, therefore, this figure has doubled in three weeks, according to data from the health agency.

– India launches vaccination of young people aged 15 and over

India will launch vaccination of 15-year-olds and older on January 3 to meet the challenge posed to the country by the Omicron variant, Prime Minister Narendra Modi announced on Saturday.

– Air traffic disrupted by the pandemic

Christian worshipers light candles and pray in front of a cathedral closed to the public due to the Covid-19 pandemic, during the Christmas holidays, in New Delhi, December 25, 2021 (AFP – Sajjad HUSSAIN)

Airlines around the world canceled about 6,300 flights over the Christmas weekend, and the Omicron variant of Covid-19 disrupted travel during the holidays, with pilots in particular quarantined.

Three members of BTS, a famous South Korean K-pop group, tested positive for Covid-19 upon their return from the United States, where they gave concerts on stage for the first time since the start of the pandemic, their producer announced on Saturday. .

– Higher number of cases during 4 months in China

China reported 140 new coronavirus cases on Saturday, the highest number in four months, as authorities try to contain the outbreak in several regions, including the city of Xi’an, where millions of people are confined and where the majority have occurred. of contaminations. occurred.

China, which has so far managed to successfully control the epidemic on its soil and recorded only two deaths in a year and a half, is on high alert as it will host the February Winter Olympics in its capital Beijing. 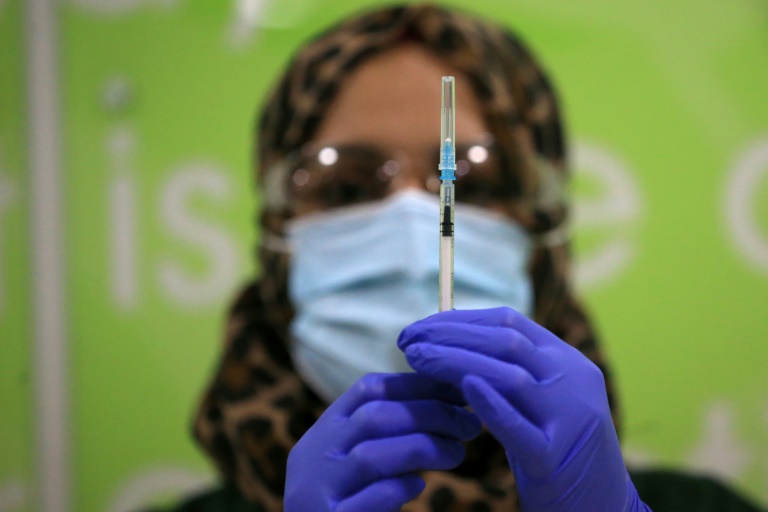 A nurse prepares a dose of the Covid-19 vaccine at an open vaccination center in Bradford, UK, on ​​December 23, 2021 (AFP – Lindsey Parnaby)

The Xi’an cases have so far spread to five other cities, including Beijing, according to state media, fueling fears about the speed of the spread.

The pandemic has killed at least 5,391,404 people worldwide since the end of 2019, according to a report by AFP from official sources on Saturday at 11am GMT.

Among the most affected countries, Peru is the one with the highest number of deaths in relation to its population, followed by Hungary and Bosnia.

The World Health Organization (WHO) estimates, taking into account the excess mortality directly and indirectly linked to Covid-19, that the number of victims of the pandemic could be two to three times higher than the officially registered.