The vertiginous increase in COVID-19 cases is confirmed in Quebec, as the province reported 3,768 new infections this Friday, unprecedented since the start of the pandemic. There are also seven additional deaths and a further increase in hospitalizations.

In total, these 3,768 new cases bring the daily average calculated over seven days to 2,286. Therefore, the trend increases by 54% over a week. The seven additional deaths bring the daily average to four. The trend has been on the rise for a week. A sign that the risk is still present despite the vaccine: of the 3,768 new cases, 1,288 were not vaccinated and 2,356 were fully vaccinated.

On Thursday, at a press conference, Prime Minister François Legault warned that Quebec would reach these new heights, revealing that around 3,700 cases would be reported on Friday. This is an important peak since the beginning of the crisis: at the peak of the second wave, Quebec had approached the 3,000 mark, but never exceeded it.

In the health network there has been an increase of seven hospitalizations, resulting in 39 new admissions and 32 discharges. Currently, therefore, 312 patients remain hospitalized in relation to the virus, of which 62 are still in intensive care, a drop of one person in 24 hours in this regard. The number of people hospitalized increased 22% in one week. On Thursday, taking into account the incidence of the Omicron variant, the National Institute of Excellence in Health and Social Services (INESSS) also forecast that their number would continue to increase in the coming weeks.

On the vaccination side, the authorities administered more than 56,000 additional doses this Thursday, to which must be added 2,410 vaccines administered before December 16 that had not yet been counted. Including people vaccinated outside the province, more than 14.4 million doses have so far been administered to Quebecers.

Almost half (48.3%) of children ages 5 to 11 have received their first dose so far; 6% of them are also waiting for their appointment. In the general population, 83.8% of Quebecers have received at least one dose and 78.3% are fully vaccinated. 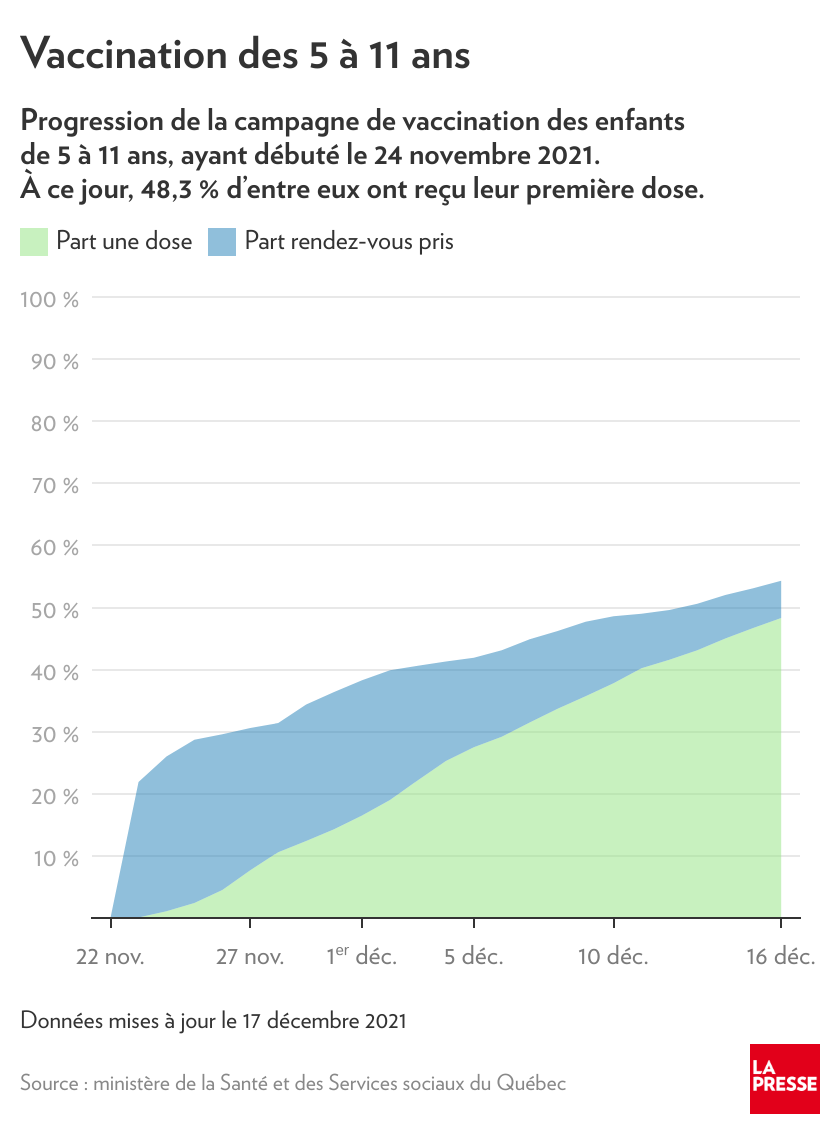 Public Health carried out 46,830 screening tests on Wednesday, a figure relatively higher than the weekly average.

Quebec on Thursday night ordered a series of new restrictions to “win the battle” against COVID-19 and the Omicron variant, with among other things the conformation of Christmas gatherings to only 10 people maximum, the capacity reduced to 50% in the shops and the ban. about dancing and karaoke. The authorities have also confirmed that the interval between the second and third doses will be reduced to a minimum of three months; It was six months until now.

“On the basis of that, we will definitely adjust our schedule. There will be more meetings available,” said Christian Dubé, confirming that 1,500 people have already offered to mobilize through the I contribute platform.

The schools, meanwhile, will remain open. In the primary network, lessons can be resumed in person on the scheduled date, but in the secondary, the first week of lessons, between January 3-10, must be virtual. The same will happen with the CEGEPs and the universities. The mask will once again be compulsory at all school levels.

Hospitalization record in Bas-Saint-Laurent for COVID-19

Number of COVID-19 cases: the count is no longer good

Covid-19: These employees find it hard to return to the office, they say

Vaccination against Covid-19: the agreement of a single parent is again sufficient to vaccinate children from 5 to 11 years old

Pfizer vaccine and heart inflammation: a small but real risk

Hospitalization record in Bas-Saint-Laurent for COVID-19

Number of COVID-19 cases: the count is no longer good

Covid-19: These employees find it hard to return to the office, they say

Vaccination against Covid-19: the agreement of a single parent is again sufficient to vaccinate children from 5 to 11 years old

Pfizer vaccine and heart inflammation: a small but real risk