France, already under strict curfew, tightened its border controls on Sunday in an attempt to avoid further containment, while variants of the coronavirus continue to spread across the world.

The pandemic has killed at least 2,121,070 people around the world and infected more than 98.6 million people since its appearance at the end of 2019, according to an AFP report on Sunday. Europe and North America concentrate two thirds of new contaminations.

In France, presenting a negative PCR test of less than 72 hours has become mandatory at night for travelers coming from the EU. The measure had already applied since mid-January to travelers from other countries.

In the newspaper Le Parisien on Sunday, the Minister of Health Olivier Véran said to wait “to be fixed on the effects of the curfew” (6:00 p.m. – 6:00 a.m.), an assessment of which will be made this week.

“If things don’t go down and the variants start to spread everywhere,” the government “will take additional measures,” he warns. “And that is called containment (…) If we see that the virus starts to progress strongly, we close”.

Government spokesman Gabriel Attal said that no decision had yet been taken, but that “all the scenarios are on the table”.

Egypt began its vaccination campaign on Sunday, starting with health professionals. People with chronic diseases and the elderly will follow.

The country, second in Africa to launch large-scale vaccination after Seychelles, has opted for the Chinese vaccine from Sinopharm. Doses of the AstraZeneca-Oxford vaccine are also expected.

More than 63.5 million doses of the vaccine have been administered in at least 68 countries or territories, according to an AFP count.

In Europe, discontent is mounting over the delivery delays announced by AstraZeneca and Pfizer. The President of the European Council, Charles Michel, called for pharmaceutical companies to be “transparent”.

Hit hard by the resurgence of the pandemic, Germany will next week be the first EU country to use the experimental antibody-based treatment administered to former US President Donald Trump when he was contaminated.

– The fear of variants –

The almost empty Pariser Platz opposite the Brandenburg Gate in Berlin on January 22, 2021 (AFP – Tobias Schwarz)

New restrictions are being imposed in many countries to address concern over variants of the coronavirus.

After a peak, the pandemic has nevertheless decelerated everywhere this week (634,200 new daily cases on average, or -12%), except in Latin America, where the city of Rio de Janeiro (Brazil) has given up organizing its traditional carnival this year. .

Second most affected country in the world (at least 216,445 dead) after the United States, Brazil, in the middle of the second wave, has just started its vaccination campaign. After 10 days of nighttime curfew, the state of Amazonas will institute a one-week lockdown from Monday.

Colombia has set up containment during the weekend.

In Europe, the Netherlands experienced their first curfew (9:00 p.m. – 4:30 a.m.) since World War II on the night from Saturday to Sunday.

Norway announced on Saturday semi-containment measures in Oslo and its region, the most stringent since the start of the epidemic. In Austria, wearing the FFP2 mask will become compulsory on Monday in public transport and in shops.

Confined for a week, Portugal nevertheless voted Sunday for a presidential election. The outgoing, moderate conservative Marcelo Rebelo de Sousa, is given favorite.

After shops and restaurants 10 days ago, the government resolved to close its schools, nurseries and universities on Friday for 15 days. But new daily records of contaminations and deaths were broken again on Saturday.

With more than 80,000 contagions and nearly 1,400 deaths, Portugal occupies over the past week the first world rank in number of new cases and deaths in relation to its population, exceeded only by Gibraltar.

In Asia, Hong Kong established a first lockdown for this weekend, in a poor and densely populated neighborhood, while Beijing was testing the population of several neighborhoods where cases have been detected.

These new measures are not without provoking new protests.

An anti-restriction protest organized by a radical group in Copenhagen sparked incidents on Saturday, resulting in five arrests.

Thousands of people also demonstrated in Madrid against the sanitary measures, denouncing the “deception” of a virus which, according to some demonstrators, “does not exist”.

Adding to the concern, the variant of the coronavirus discovered in Britain could be more deadly, according to British Prime Minister Boris Johnson.

The European epidemic agency has raised the risk associated with new variants to “high / very high”, predicting “a rapid escalation in the stringency of measures in the coming weeks”. 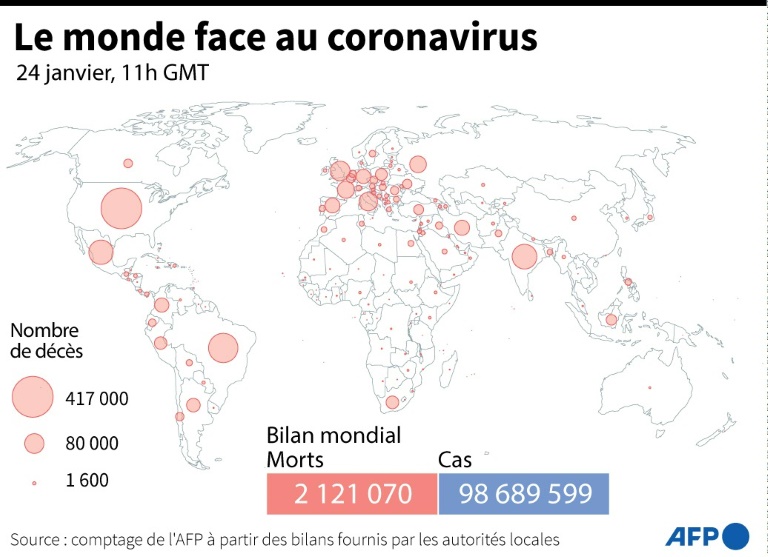 For the doctor Yves Lévy, director of the Vaccine Research Institute at the Henri-Mondor hospital in Créteil, near Paris, “this raises the long-term question of the need to adapt vaccines to mutations that have already appeared or to We must therefore prepare ourselves for the possibility of having to revaccinate on a regular basis. And therefore, no doubt, to develop new vaccines, as we do every year for the flu. “

For him, faced with variants, “confinement remains the most effective weapon”.