“It’s not against each other”: Dilara, 25, holds out her arm to Geneviève, 91. Together, they roam, as best they can, the streets of the capital to get out of the silence and loneliness inflicted by the measures linked to Covid-19.

Under a dazzling February sun and despite still cool temperatures, the nonagenarian who has lived alone for many years, is delighted with the visit of Dilara Ekici, a 25-year-old student and a volunteer from the association “Paris en Compagnie”, a solidarity launched in 2018 by the town hall of Paris for people over 65, and supported by 3 associations (Autonomie Saint-Jacques, Les Petits frères des Pauvres and Lulu dans ma rue).

Geneviève Dupaquier and Dilara Ekinci, a volunteer are sitting on a bench during a walk in Paris, February 19, 2021 (AFP – Christophe ARCHAMBAULT)

“I have one arm to lean on, I can walk a little better than on my own, and the company is so pleasant,” enthuses Geneviève Dupaquier, a pretty lady with piercing blue eyes, who suggests a broad smile behind his mask.

The visits of volunteers “it comforts (me)”, she confesses, “I have the morale when I see them; first I speak, and it’s important to speak” so as not to lose my mind.

For Geneviève, as for other elderly people, confinement and health restrictions, “it’s really very sad”. “Life is going out, having fun … We can’t anymore. We have to stay at home, we can’t receive our friends because we shouldn’t”, adds this bit of woman, several times great-grandmother of children whom she does not know.

She regrets these little habits “at the residence, where every Saturday evening we had a small aperitif, sometimes at one, sometimes at the other”. Old routines which punctuated his life, before, and whose return still seems distant.

Last week, a few voices within the Scientific Council (which guides the government) felt that it was no longer necessary to chain confinements but to opt for a “social contract” between generations, where the oldest and most vulnerable would agree to self -isolate. An idea with “very questionable feasibility” for the Minister of Health.

“Why? Because young people are not at risk of catching the disease? Because they have more defense than us?”, Annoys Geneviève. 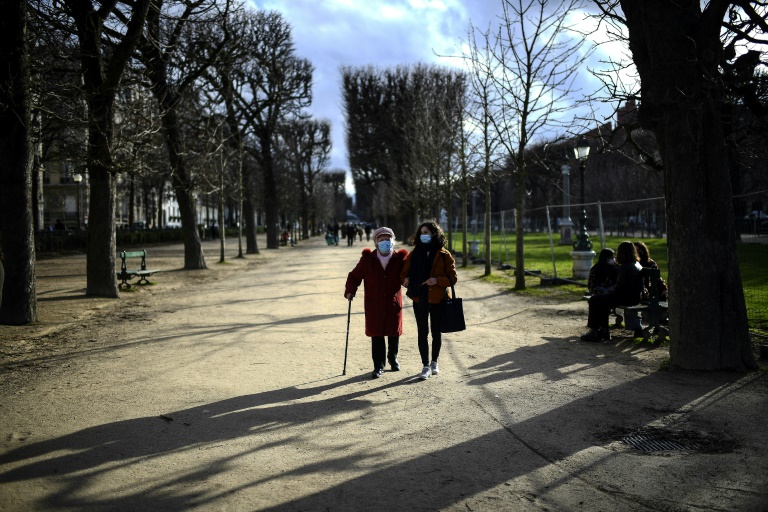 Geneviève Dupaquier (g) with a volunteer Dilara Ekinci, during a walk in the Jardin du Luxembourg, in Paris, February 19, 2021 (AFP – Christophe ARCHAMBAULT)

“Loneliness is a subject which affects the elderly but which also affects a large number of young people in particular, students or young workers”, warns the deputy in charge of Solidarity between the generations at the mayor of Paris, Véronique Levieux. Two groups between which “there are many more positive links and desire to go to each other than a source of conflict,” says the elected.

“There is no sacrificed generation, nobody has decided to send the virus against young people,” tempers Serge Guérin, a sociologist specializing in aging. For this specialist, it is rather obvious that “there is one thing that works well in France, it is the inter-generation”.

According to a recent Odoxa poll, 56% of French people fear “a conflict between generations in the coming months”, “major disagreements between the youngest and the oldest French”.

Sitting on a bench close to the Senate, Dilara Ekici, a student looking for an internship in Paris, brushes aside any conflict with seniors: “It’s not against each other”. 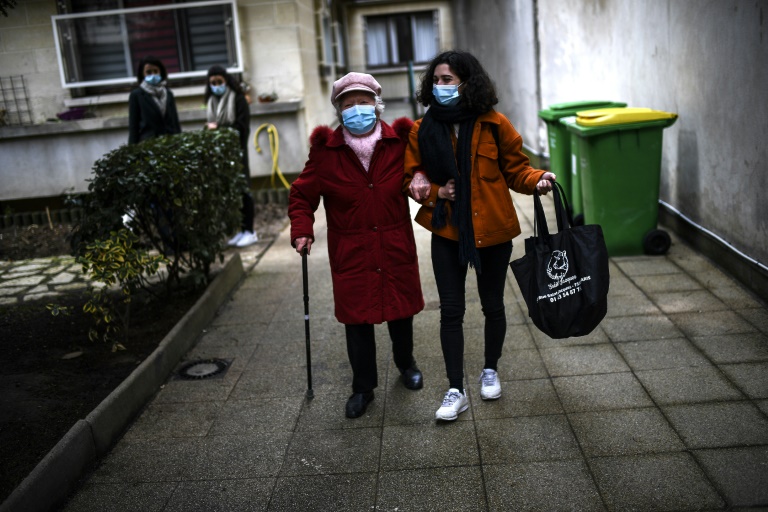 Geneviève Dupaquier and her volunteer helper Dilara Ekinci are preparing to go for a walk in Paris on February 19, 2021 (AFP – Christophe ARCHAMBAULT)

For Salma Eddourhri, 25, another volunteer, young people “want to live, want to see a lot of things … But I am against this confinement by generation”. It would amount to sacrificing “another generation, (that) of seniors and elders,” she opines.

In Sèvres, a town to the west of Paris, in the cramped apartment filled with memories of Odette Tremon, 84, sometimes it’s the volunteer who lets herself go and tells “(her) problems”.

“I am a young graduate and finding a job today is quite complicated” … In short, “problems that (her) personally upset”, she admits.

“At 25, I go home at 6:00 pm, I live alone, I am really in a situation of isolation too,” she explains. “I am deprived of my parents because they live abroad; with the closing of the borders, I am not allowed to go to see them.”

At other times, it is Odette who bursts into tears while recalling the memory of her 40-year-old lover, who left suddenly at the end of August. At Christmas, it is together that the two women have chosen to wake up.

Monoclonal antibodies: “The government bought a drug without proof of effectiveness”

Microsoft wants to use AI to unlock the potential of HPC

5 questions to overcome the evils of winter

Leak of medical data in France with a list of nearly 500,000 names

Monoclonal antibodies: “The government bought a drug without proof of effectiveness”

Microsoft wants to use AI to unlock the potential of HPC

5 questions to overcome the evils of winter

Leak of medical data in France with a list of nearly 500,000 names