The FTX case continues to rock the cryptocurrency market. The domino effect caused by this scandal is likely to affect the development of the industry for some time. Several market players in turn are not so far from the liquidity crisis. This week we saw an exchange like Genesis suspend withdrawals on its lending platform. Gemini Earn also announced a suspension of its services, citing the contagion effect of the FTX fiasco. However, some projects have managed to achieve good results despite a rather ambiguous overall context.

This week, the cryptocurrency market confirmed that FTX is a typical example of what Satoshi wanted to fight against by inventing Bitcoin. An innovation that should promote a peer-to-peer, decentralized payment model without intermediaries. Through its investment division, Alameda Research, FTX has replicated the flaws of the traditional financial system in a purely decentralized universe. Between lies, mismanagement of its clients’ funds, and compromising trades, the FTX fiasco is fueling doubts about the place of centralized players in the crypto world.

Aside from crypto prices, several exchanges are in a bad state due to the Sam Bankman-Fried (SBF) fiasco. Thus, Genesis, BlockFi, Gemini showed clear signs of weakness.

However, as they say, in the trouble of one is the happiness of another. Demand for cryptocurrency wallets (cold wallet or hot wallet) has increased markedly due to the FTX case. Decentralized platforms commonly referred to as DEXs have also been the beneficiaries of the SBF platform scandal. The rise in the value of the DFI Money token is a particular indication of the rise in DEX usage.

Now let’s move on to the top and flop of the week.

Tops: Chiliz cooks up her world in style

In addition to tokens from wallets or decentralized exchanges, token fans have been popular this week. This is why the Chiliz (CHZ) cryptocurrency, the company that creates fan tokens, has risen in price despite this rather difficult market context. Thus, the value of the Chiliz token increased by 18% in seven days, while the value of the fans’ tokens associated with the national team of Argentina and Portugal increased by 37% and 26%, respectively, in weekly data. Investor interest in fan tokens, as well as Chiliz (CHZ), of course, is due to the context of the World Cup.

Surprisingly on the leaderboard was a token from Voyager Digital, an exchange that was in crisis after the collapse of Terra Luna. It appears that the rumors of a proposed takeover by Binance have helped the exchange’s native cryptocurrency perform well. Not surprisingly, the DFi Money project stands out as a performance leader among the top 200 cryptocurrencies.

Fails of the week: Solana can no longer

However, the Ethereum killer was believed to bounce back after a very strong performance earlier in the week. However, his association with FTX continues to influence the evolution of the SOL cryptocurrency. The project is no longer in the top 10 most important cryptocurrencies on the market, and its price is getting closer and closer to $10.

The Celsius token, the lending platform that went bankrupt after the Luna crash, has the second worst performance after Solana. Finally, ApenFT completes the podium of bad students. 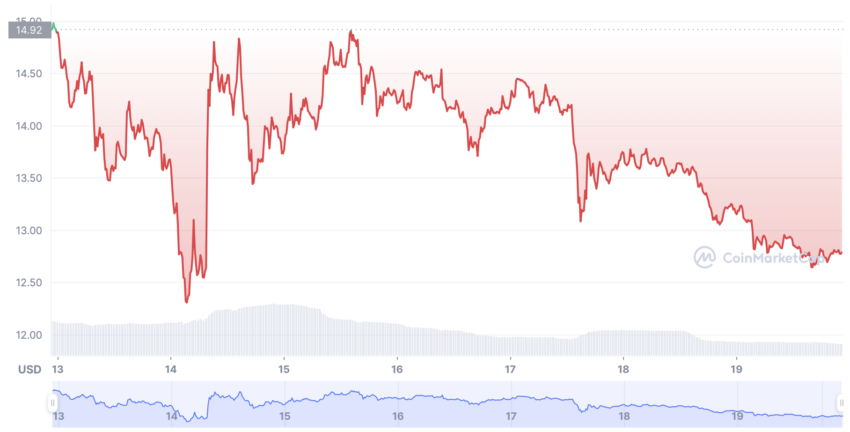